How diversity in board games captures the spice of tabletop life With diversity continuing to be a hotly-debated topic in and around gaming, we break down the efforts taken by two of the medium’s biggest franchises to welcome everyone into their worlds

How are board game characters used to make tabletop worlds more interesting places to be? How do developers use these characters to create a rich universe? We look at two series – Fantasy Flight Games’ Arkham Horror Files and Matt Leacock’s Pandemic – to see how they use characters, and why having lots of different people to choose from makes a board gaming a richer, more welcoming place to be.

Fantasy Flight’s Arkham Horror Files universe is a 1920s occult world full of peculiar occurrences and sanity-shaking monsters. The series visits locations from author H.P. Lovecraft’s stories and beyond. Eldritch Horror takes players around the world and allows them to visit locations like the Mountains of Madness; Arkham Horror and its expansions take place in the titular town and surrounding areas (Dunwich, yay!); Elder Signs explores the Miskatonic Library in Arkham; and Mansions of Madness is set in the Vanderbilt Mansion. (Cool fact about this; the mansion is based on the Cornelius Vanderbilt II house, the largest home built in New York. The Vanderbilts were a dynastic family who created and lived in buildings built to a style best described as ‘creepy old house’.)

The (many) artists who’ve worked on the Arkham series have worked to a consistent brief. It’s dark and dangerous, coming straight out of film noir and populated with interesting people who have encountered unexplainable horrors and want to do something about it. Cigarettes, super dames, sleuths and slimy things.

The Arkham series introduces us to a large cast of playable characters. Starting with Arkham Horror, there are initially 16 characters to choose from. Seven of these are women. With each expansion and new game, players have been introduced to another 33 characters, making 49 in total. 21 are women, and five of these are people of colour. The eight starter characters for Mansions of Madness’ first edition are four women and four men. Mansions’ second edition again has four women, four men – two of the non-white characters are part of this group. Further expansions and conversion packs add previous characters back in.

Mansions’ second edition is a good example of how Fantasy Flight has thought about how characters are represented. Already ahead of the pack with a mix of people to choose from, the publisher is not entirely off the hook.

Katherine Dinger, one of the artists for Arkham Horror, says of the initial art for researcher character Mandy Thompson: “I was supposed to paint a film noir style scene of a sexy secretary snooping though papers on a desk in a dimly lit basement.”

Dinger's original painting (below), ‘Basement Secretary’, shows Mandy leaning forwards over her desk so that the viewer can look straight down her top. Similarly, the black and Asian characters in the game tend to be rather tried and tested stereotypes – including a jazz musician, a Voodoo priestess (both from New Orleans) and a martial artist. Most difficult of all is Rita Young, ‘the college student’. She’s meant to be, but doesn’t look like, an African American, because her art is drawn in an odd blue tone that removes a great deal of colour from the picture. However, her backstory specifically engages with race issues; she’s being chased by sinister cultists who turn out to be even more extreme than expected. “Whether her stalkers are members of the Klu Klux Klan or something even more sinister, she’s going to face them head on.”

By including Rita Young and ‘the secretary’ Minh Thi Phan as the starter characters in Mansions’ second edition, and by revising the art on the new character cards (Mandy Thompson is still a sexy researcher, but she’s done her blouse up), Fantasy Flight has made a conscious decision to update their characters for an audience who are more aware of why positive images of race and gender are important. 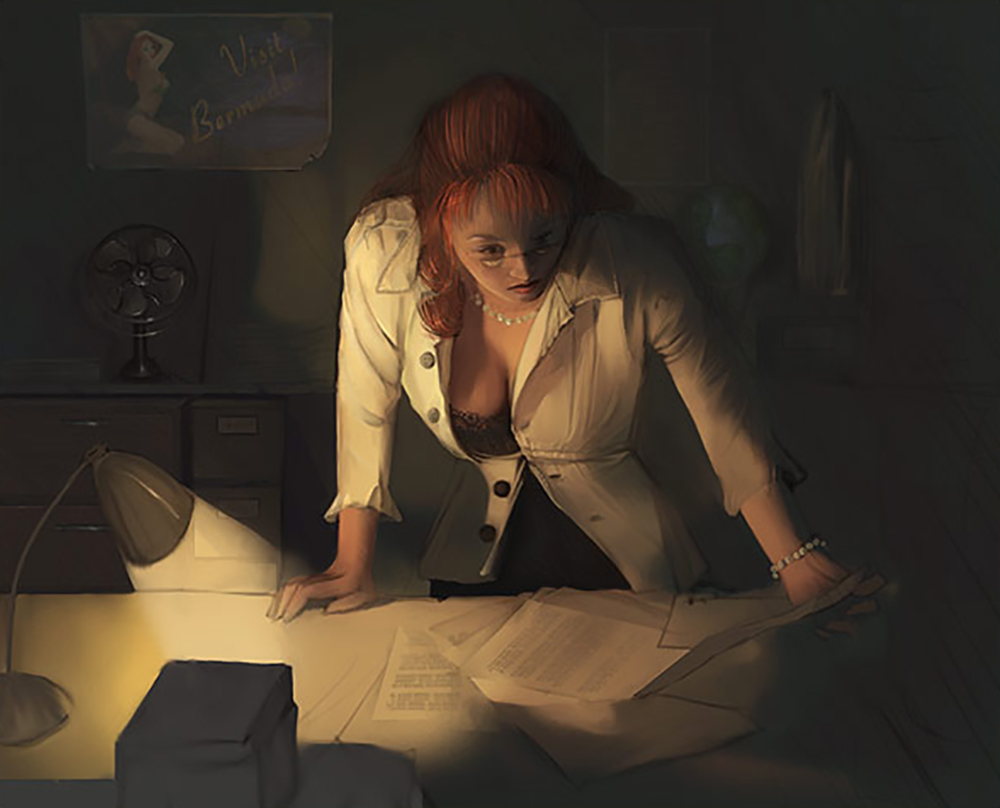 There is a saying in video games that designers often design for themselves. This means that they sometimes forget to include people with whom they do not identify or, in this case, with whom they might not play games.

While games players are a diverse and interesting bunch – go to any games meetup or event and you’ll see how varied we all are – this is currently less so at the professional level. Designers are less mixed than players: racially, sexually and gender-wise. As a result, unconscious bias creeps into board games design, meaning that not only are some groups underrepresented, but that often when they do appear, they have rather awkward or uncomfortable characteristics.

It’s important to be clear here that designers and developers are not horrible people. In fact, they are really conscious of this issue and are working really hard to change things. Secondly, including many different types of characters isn’t a deliberate move by designers to exclude existing gamers. Why should it be? More diverse characters appeal to a wider breadth of people. That means a wider pool of people spending money on a game. It also means, in practical terms when we pick up a games with lots of characters in it, that we – the players – get loads of choice.

Including many different characters does not mean taking the fun out of play, or forcing people to play something they don’t want to. Instead, introducing characters that take us away from stereotypes makes play interesting, and, if we’re into a bit of roleplay with our character-driven games (especially with titles such as the Arkham series), it also makes them interesting. The Arkham games, and games like them, are about giving the player as much choice as possible when they pick their starting team. Why shouldn’t they be a mixed bunch?

With the Arkham games, Fantasy Flight has another interesting problem. Not only was Lovecraft a horrendous racist, but the Arkham universe is set in a time where women had only just got the vote, and people of colour from all nations were treated as second-class citizens. It would be easy, therefore, to limit the female and characters of colour (which, let’s be fair, does still happen in the game), and to adopt a similar attitude to the original stories. But, wait. If we are willing to believe that the streets of a sleepy library town in Massachusetts are inhabited by raving cultists, tentacled monsters and portals to other dimensions, shouldn’t we also accept that the people fighting these monsters are also not tied to the historical stigmas attached to their gender, sexuality and colour? Arguing that we should stick to the beliefs of the time in a fantasy game about casting spells to banish arcane monsters seems… weird.

Fantasy Flight’s characters let us choose. Maybe we’re not interested in what the characters look like and just want to play according to the stats on the card. Great! There are 49 different choices. But we also have the choice of reading the flavour text and getting involved in the character written on the back of the card. And if we don’t like that, we can invent our own stories. A recent game of Mansions I played was entirely based around the way Agatha Crane’s mini was holding out her arms. (“She looks like Gandalf.") That was pretty cool. So, with that in mind, surely including a range of people is a good way to make our games interesting, and allow us to have fun ‘outside the rules’. 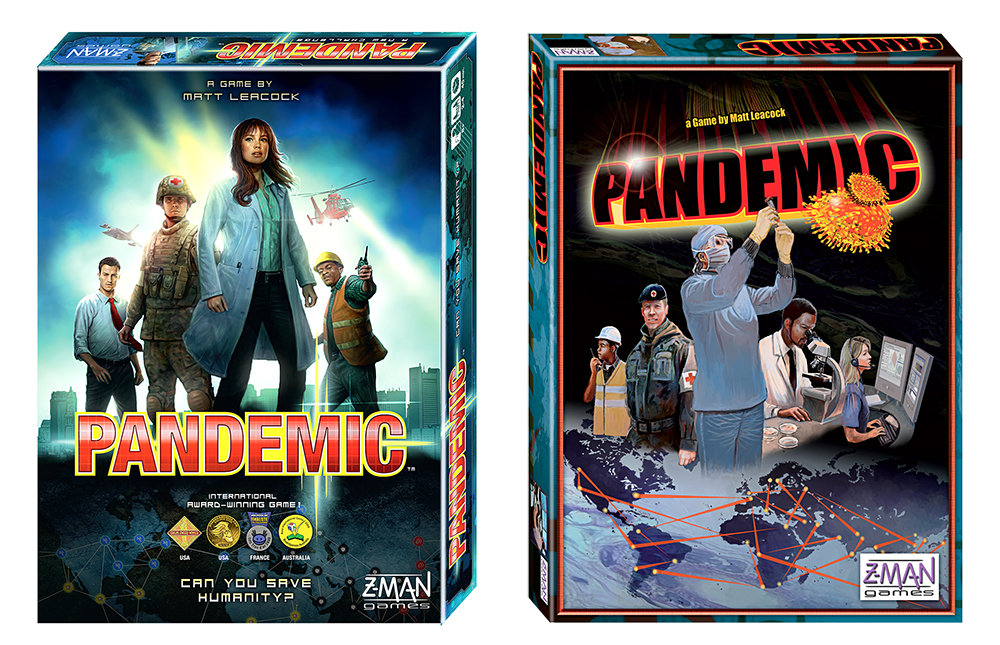 Let’s move this to a different type of game. In Matt Leacock’s Pandemic titles, the characters don’t have traditional roles. Instead of the fighter, healer and rogue, we have starter characters of the medic, scientist, operations expert, researcher, quarantine specialist, contingency planner and dispatcher. Four women, three men and three black characters.

The original Pandemic box (above, right) has two black characters and a woman on the cover. The new artwork (above, left) has a woman standing centre stage. What does this contribute to the game? Atmosphere. These people seem real and, in spin-off Pandemic Legacy, naming our characters means we get very fond of them.

Pandemic’s rules are also deliberately written so that the player is ‘you’ or ‘they’. (“After a player is done infecting cities, the player on their left goes next." "Discard the city card that matches the city you are in.") This means anyone can feel that the rules speak to them directly. It’s a really subtle thing, but one that makes the player feel welcomed.

A familiar argument against including diversity is that it’s not important to the game, or that people don’t notice it because it doesn’t matter to them personally. Well, if you’re a woman, or a gay player, or just someone who likes playing people different to themselves, it really is.

Similarly, there are some games where these issues are unimportant (Dobble) – because they aren’t about characters, nor do they involve complex stories – and others where these ideas take centre stage (Train, Freedom: The Underground Railroad).

Fortunately, board gaming is big enough for all of these games to co-exist. And if you don’t care about it? That’s fine too. Games are for everybody, which means we should all feel able to play, let people take part, and have fun doing so.