Have You Played? Hellapagos Keep an eye on your friends as you attempt to make it off a desert island alive, maybe even together

Ah, tropical paradise. An excellent setting for a cooperative board game. Until you realise your fellow strandees have just finished off the last of the water. You make a mental note to keep that bottle of sparkling Evian you found while searching the wreckage secret, in case you need it. Oh, and the gun – which you don’t think you’ll need – but if you found a bullet, that might be quite useful in a pinch… especially as the storm is coming in. There’s only so much room on the raft as it stands, and while you could break your back trying to make enough spaced for everyone, you still need to gather water.

Hellapagos is a game of collaboration, up to a point. Players (three to twelve of them) are stranded on a desert island á la Lost or Survivor, although more like that latter as there is usually an actual end to Hellapagos and the plot makes a great deal more sense. And you get to vote your friend off into starvation.

It’s a game that comes with quite a lot of components for what is, ultimately, a bit of a party game designed to make you have loads of arguments. You get some nice wooden balls, a bag to put them in, and some wooden tokens and a couple of decks of cards (including the excellent ‘crate’ style card boxes) – and all of this in a box that would just about house two loaves of soreen. Which would be a very handy high-calorie food if it were available on the island, but alas… 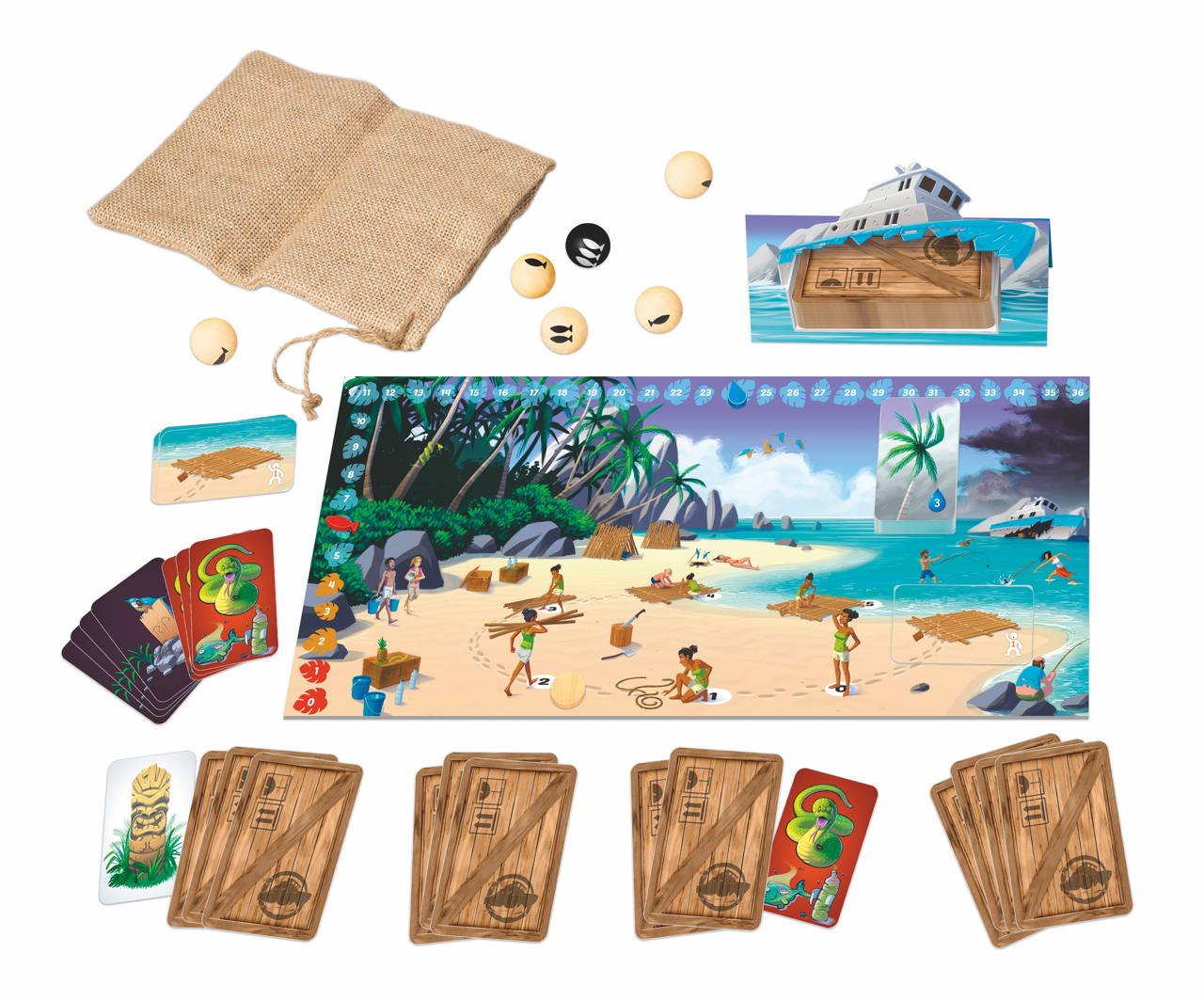 It’s a survival game. Players take turns either fishing (gaining food), gathering water, searching the wreckage of their ship, or looking for wood to build their escape-raft from. They can also play their wreckage cards whenever they like, the timing of which becomes crucial as things take a turn for the worse.

The mechanics of these actions are a mix of randomness and push your luck. Water can be gathered equal to the number on the weather card – indicating how much rain has been gifted to the island. Skipping this on your turn might seem wise if supplies are good, but there’s a chance that there’ll be no rain for a couple of turns – and a drought means death. Fishing is simply a case of grabbing wooden balls from the bag and increasing the number of fish in the supply equal to those shown. Gaining the all important fishing rod item can see you set up as the resident fisherman in the game (as it allows you to draw extra balls from the bag), a position everyone is quite thankful for, for the time being anyway.

Building a raft requires exploring to find wood that’s decent enough to make a vessel from. Here you get one space, plus as many non-black wooden balls you draw from the bag. Get the black one, and you’ve been bitten by a poisonous snake. This is a fun little push-your-luck element that might get you voted off – after all, if you’re poisoned then there’s no way for you to contribute for the next round (and indeed, in voting). If you do manage to, eventually, get all the way round the sixth slot, you get one raft card, which has room for a single person when the time comes.

But what if you run out of food or water? In this case someone has to die. But don’t worry, because you’re not that evil. It’ll go to a vote – democratically decided starvation is better right? As such players will vote on who should miss out on rations and water (in a one, two, three, point manner) and that’s it… unless someone happens to be holding out on a bottle of water, some food, or, most amusingly, a gun.

You see, the cards you gather from the wreckage give you private advantages. They let players hoard resources, or share them. These cards can be played any time, so nice players might decide to drop the food into the shared food pool, while others might not use it until it’s their neck on the line.

Escaping the island comes in a couple of flavours – one is through having plenty. If you’ve somehow managed to get everything you need, with the extra food required for the trip, then you’re all set. You and your new island friends can enjoy the journey to safety.

But frankly, that’s barely ever happened. Most likely the storm card will be turned over from the weather deck (it’s purposely shuffled in towards the end). This means players have to leave the island next turn, regardless of how healthy they all are. Which brings in rounds of voting, and, most likely, violence and bribery. 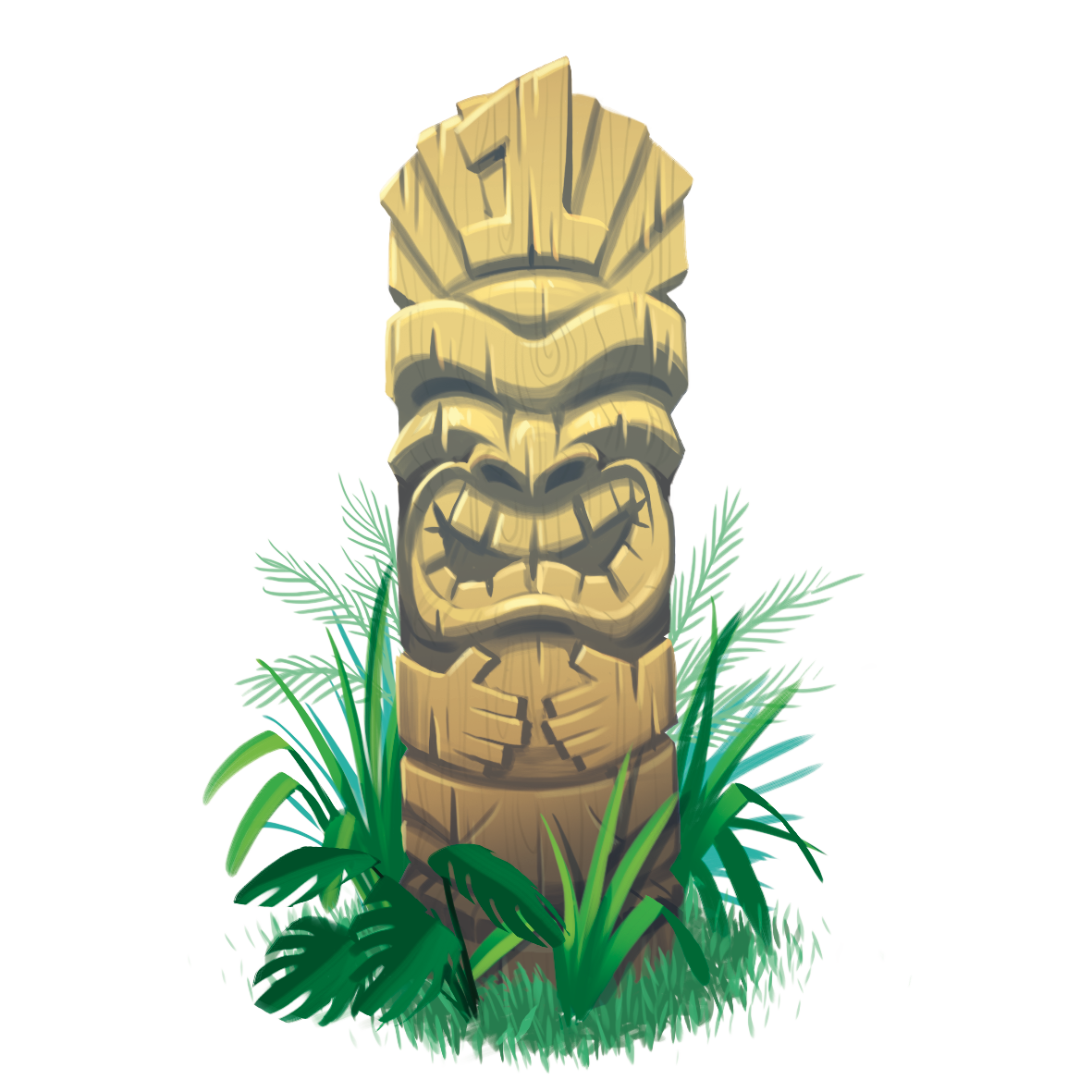 Everyone will quickly find their place in Hellapagos. While much of it depends on what you’re holding in your hand, the game remains one of those party games that’s very telling about people’s character. Watch as your friends move from trying to work together to have enough food, to becoming deeply suspicious when they go wreck-diving instead. Marvel at how, once someone has a gun and a bullet, they’ll kill people in cold blood for their cards. And become entranced by the fact that people are still happy to work with them afterwards.

Because the main actions of the game are played in turns, it can often be seen that someone going for an item early in the round is shirking their responsibilities and only looking out for themselves. That is, of course, also true of everyone around the table. While you might be making a raft with enough room for everyone, in theory, there’s a good chance that you’re not going to finish it.

And while you might be concerned about player elimination, you shouldn’t. Not only is the brutality of simply removing someone from the game after voting for them to starve deeply thematic and amusing, the game only lasts 20 minutes at most. Or, if you like, you can allow ghosts to vote in one of the variants included – which is a great option for those who like a vengeful spirit or two in their games evening.

You don’t need to worry though, as the way that Hellapagos brings players to winding one another up, forming short-lived and short-sighted alliances, and generally causing social chaos, there’s plenty to amuse you from your shallow grave.