From agents to ammo: Designer Manuel Correia reveals how he made the Superhot Card Game Manuel Correia is the creator of Superhot Card Game, the tabletop adaptation of the critically-acclaimed first-person shooter video game, which recently raised more than $117,000 on Kickstarter.

We sat down with the designer to ask about translating the innovative time-bending mechanics into a physical form and the evolution of his previous title, Agent Decker, as it was transformed into the spin-off.

Where did the idea for turning Superhot into a card game come from?

When I pitched Agent Decker to Board & Dice they really liked the mechanics but felt the theme was a bit too generic. There are already a lot of games about spies going on missions and they wanted it to stand out from the crowd. They knew people in the Superhot Team and showed them my game, along with my pitch on how it could be expanded to fit Superhot’s core concepts and mechanics. The team liked it!

What did you learn from your time creating Agent Decker that you brought into your work on Superhot?

One of the main design challenges from Agent Decker was making a limited card pool seem larger than it actually is. Part of it has to do with multi-use cards and the other comes from creating cards which have a different value to the player depending on the current goals and the overall game situation. This breaks up dominant strategies and adds to the replayability. 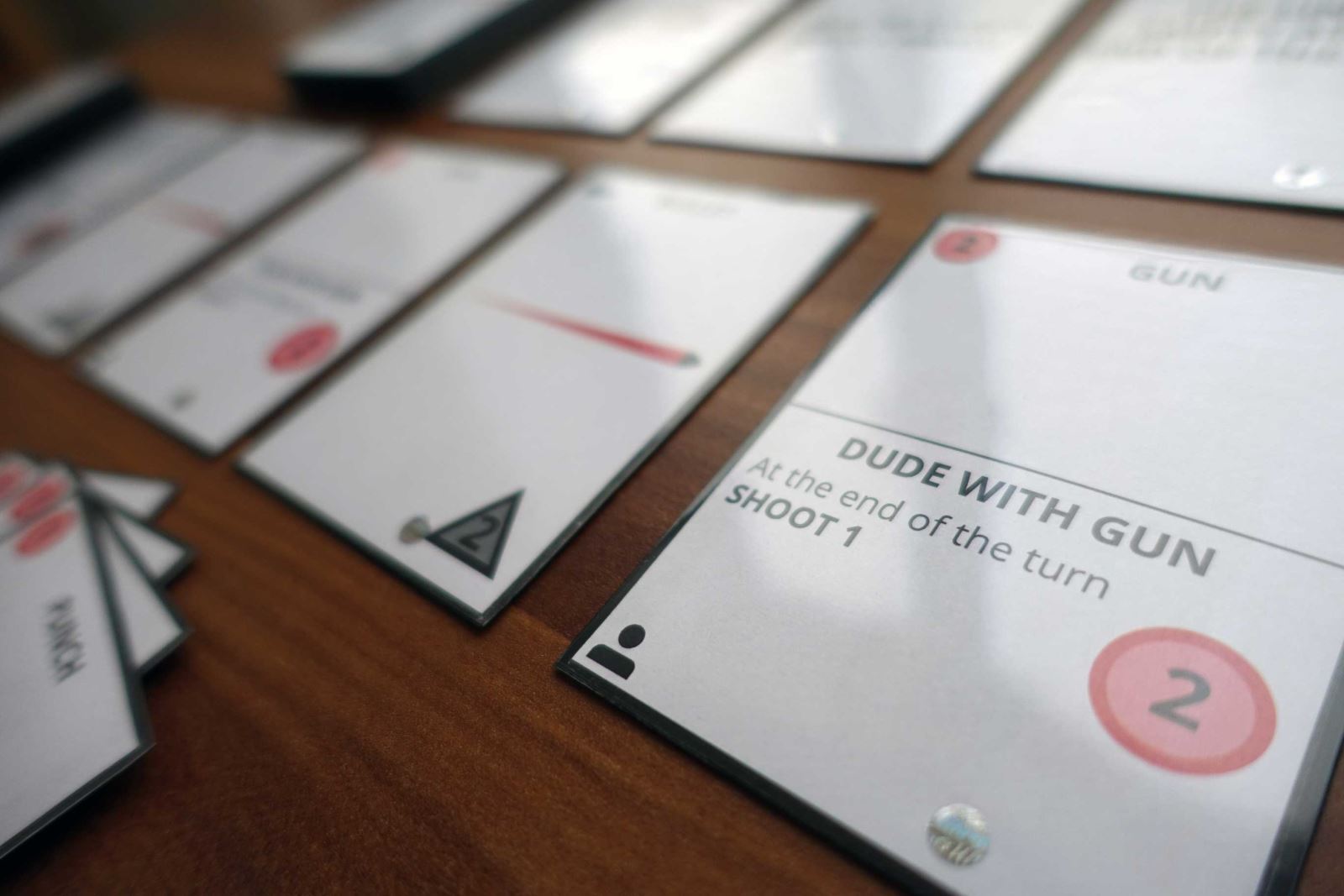 What makes Superhot specifically suitable for a tabletop adaptation, compared to other first-person shooter games?

If you look at it closely, Superhot is pretty much turn-based already! The super-slow motion gives you time to look around and plan your next move, and the choice of when to speed it up is in your hands.

Why did you decide to turn the game into a card game, rather than a board game with miniatures, for example?

The idea sprung from the core Agent Decker mechanics, which is a card game.

While a miniature game could look really cool due to Superhot’s slick art direction, I imagine there would have to be a lot of upkeep. If you’re going for straight-up simulation you’d need a lot of bullets flying around, each with their own direction, you’d have to remember which ones you have moved already this turn and what happens when they hit different things. At that point I’d rather play a video game!

Could you explain how you translated the video game’s gameplay into the card game’s mechanics?

Agent Decker’s core systems are deckbuilding and a mission progression. The main thing that didn’t fit was the alarm, which was the main threat and the source of the most difficult decisions.

This was the perfect time to bring in Superhot’s core concept: ‘Time moves only when you do.’

At the center of the table there’s a line of six cards. They represent where you are, what you see and what enemies are there. This line will scroll depending on how many cards you used during the turn.

But where’s the danger in that, you ask? Bullets.

Bullets are flying towards you. The faster the line scrolls, the less time you have to react. This mechanic creates very interesting dilemmas! 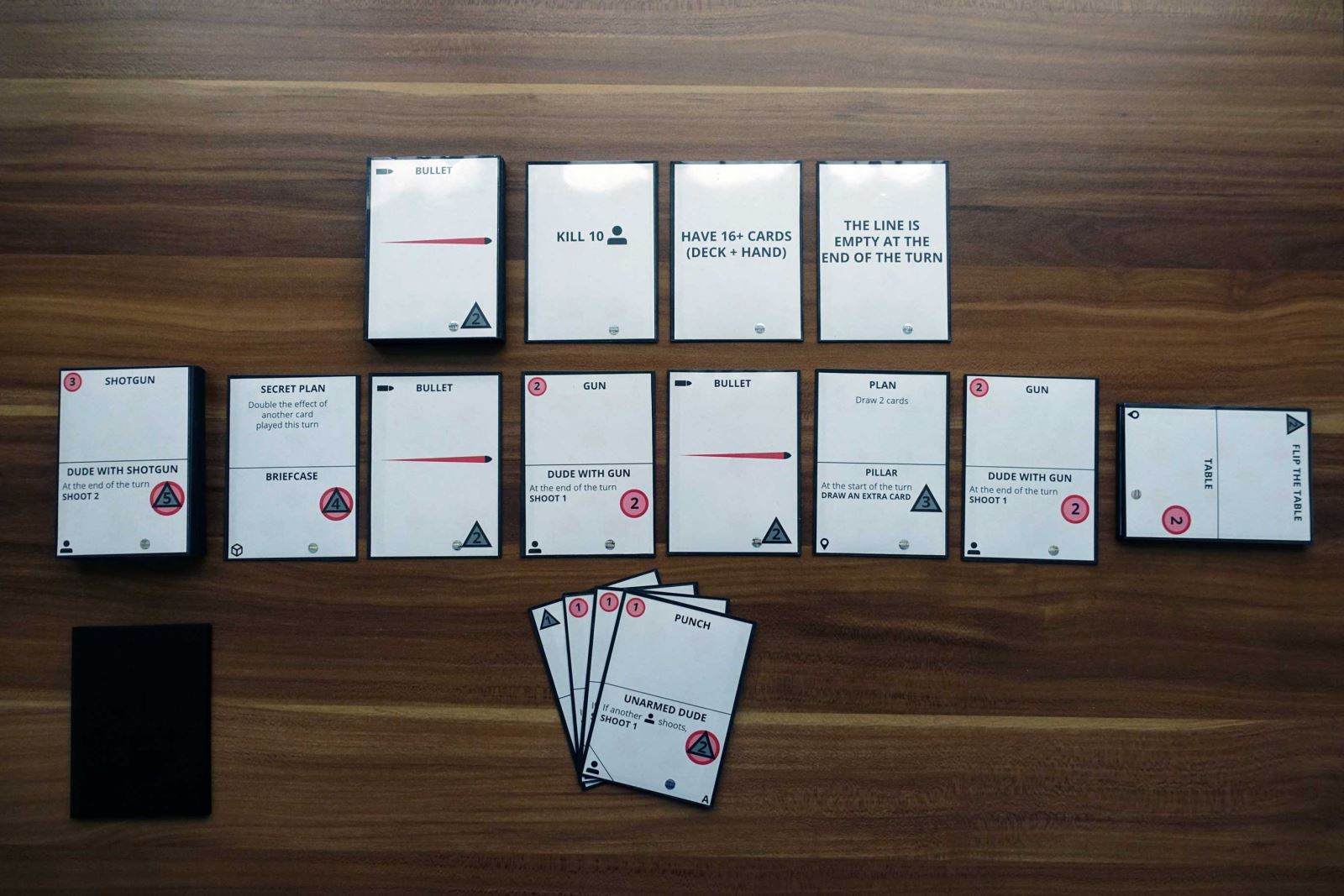 What was it like working with the video game’s developers? How free were you to experiment with the game’s mechanics and artwork?

I’m not in contact with the Superhot Team directly but Board & Dice is! It just so happens that they’re both in Poland, while I’m in Germany. This allows for an interesting collaboration where they can get together to play my latest prototype and give feedback, which B&D relay to me.

I’m very much in contact with Superhot though. I played the first prototype and fell in love with it right after the game jam, backed their Kickstarter campaign and finished it before this project started.

I didn’t have strict guidelines for the mechanics but as a fan I want to make sure that it feels true to the video game.

As for the artwork, I’ve mostly been working with my own placeholder graphics which are very simplified but follow the game’s color scheme. I got to see an early mockup and it looks very fitting.

Why did you decide to bring the game to Kickstarter?

Superhot is no stranger to Kickstarter and Board & Dice have a proven record so it seems like a perfect match. They are very comfortable with it – not just for gathering funds but also as an excellent way to market and promote the games. 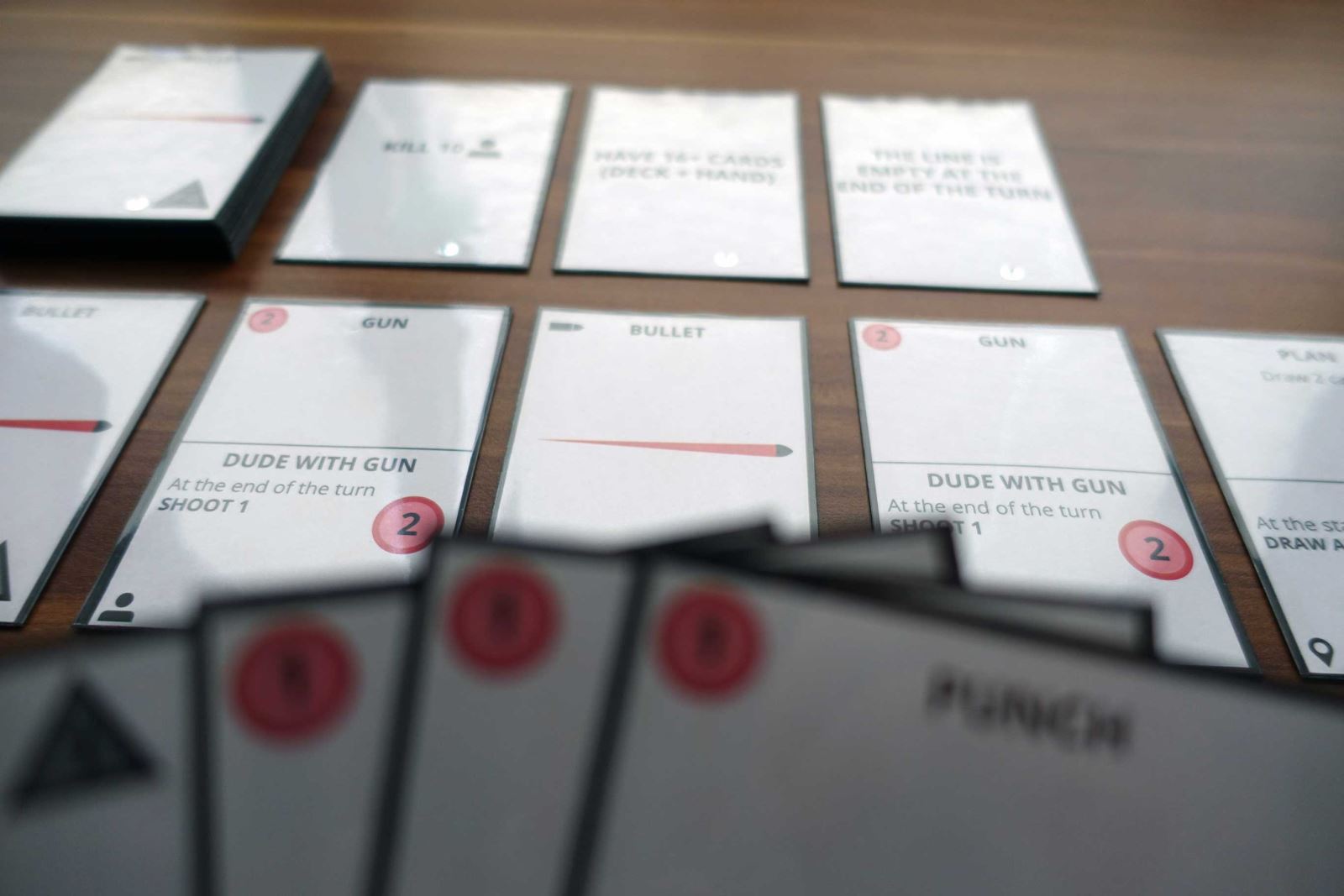 Would you say that the game is aimed more at video game fans or tabletop fans?

Personally I’m aiming it more at tabletop fans because first of all it needs to be a solid card game. I’m doing my best to channel my favorite parts of Superhot into a game that plays well on its own and takes advantage of the medium it’s in.

Also, I want to make it accessible for every player, whether you know the original game or not.

What plans do you have to support the card game in the future?

We discussed several different ideas but nothing is set in stone yet. The design is very modular, so it could be expanded if it’s well received.

Outside of Superhot, what’s next for you as a designer?

After Superhot I’m going to be working on the official release of Agent Decker. It will be fun to go back after seeing it from a different angle and changing the formula so much. I hope I can get some time to play around with new ideas because it’s the most fun part of the process and it always leaves me motivated.

Not sure if it counts but during but I’m also a video game designer during the day, where I’ll keep creating new content for Forge of Empires!