Land of the rising fun

The Japanese hobby scene is starkly different to the English-speaking world’s, so we thought we’d pop into the biggest event in the Japanese calendar Tokyo Game Market. Here’s our report:

Words and Photography by Nico with Translation by Saigo

On April 23 to 24, 2022, Tokyo Game Market 2022 Spring took place at Tokyo Big Sight, West Halls one and two. Due to the COVID-19 crisis, demo tables to try out the games were available only at block booths. The attendance was 16,000 in total over two days. Here is my report with photos on some booths at the venue. 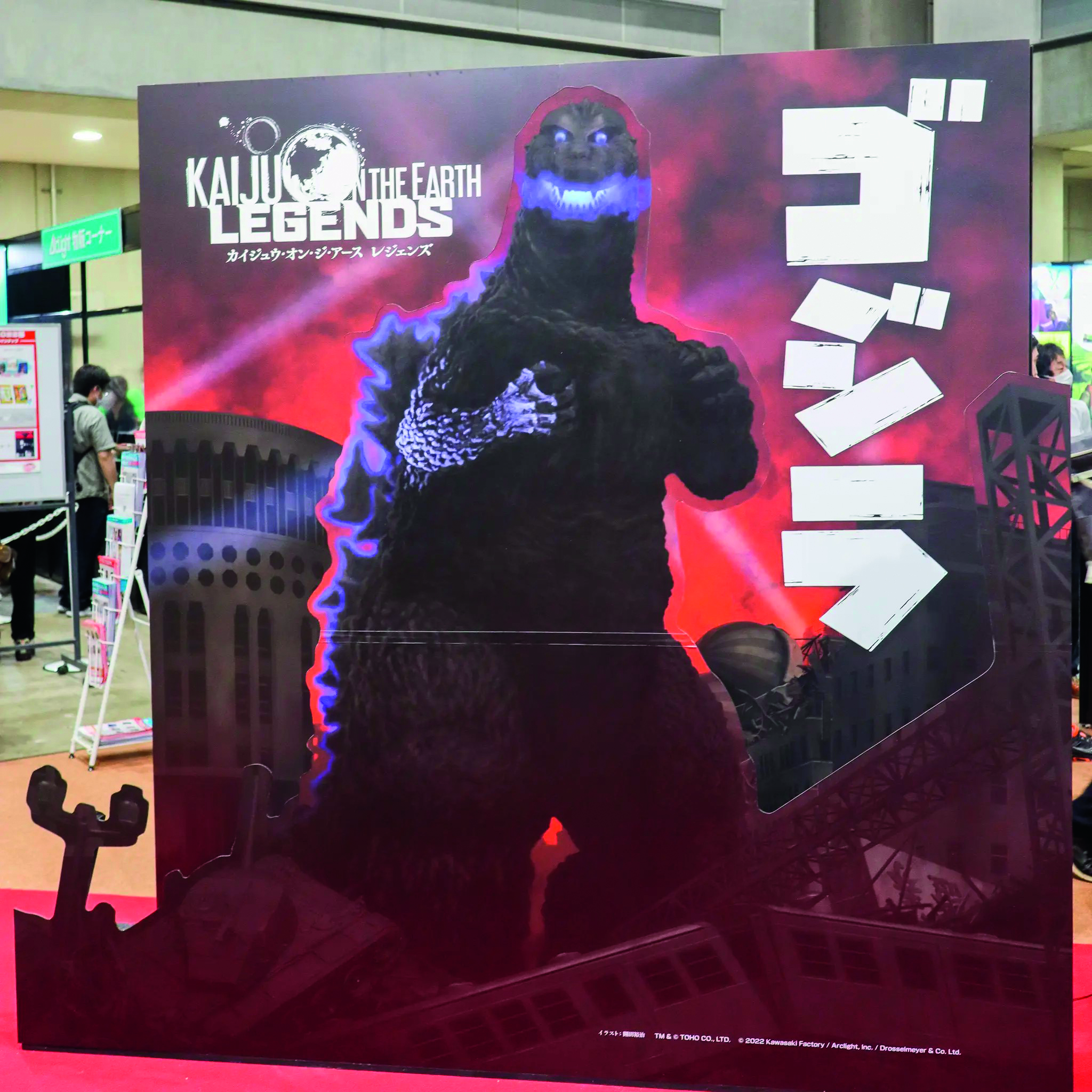 GODZILLA (KAIJU ON THE EARTH LEGENDS)

In the center of the Arclight booth was the new monster disaster game Godzilla, released on April 23. It is a semi-cooperative game based on the iconic kaiju monster of the same name. 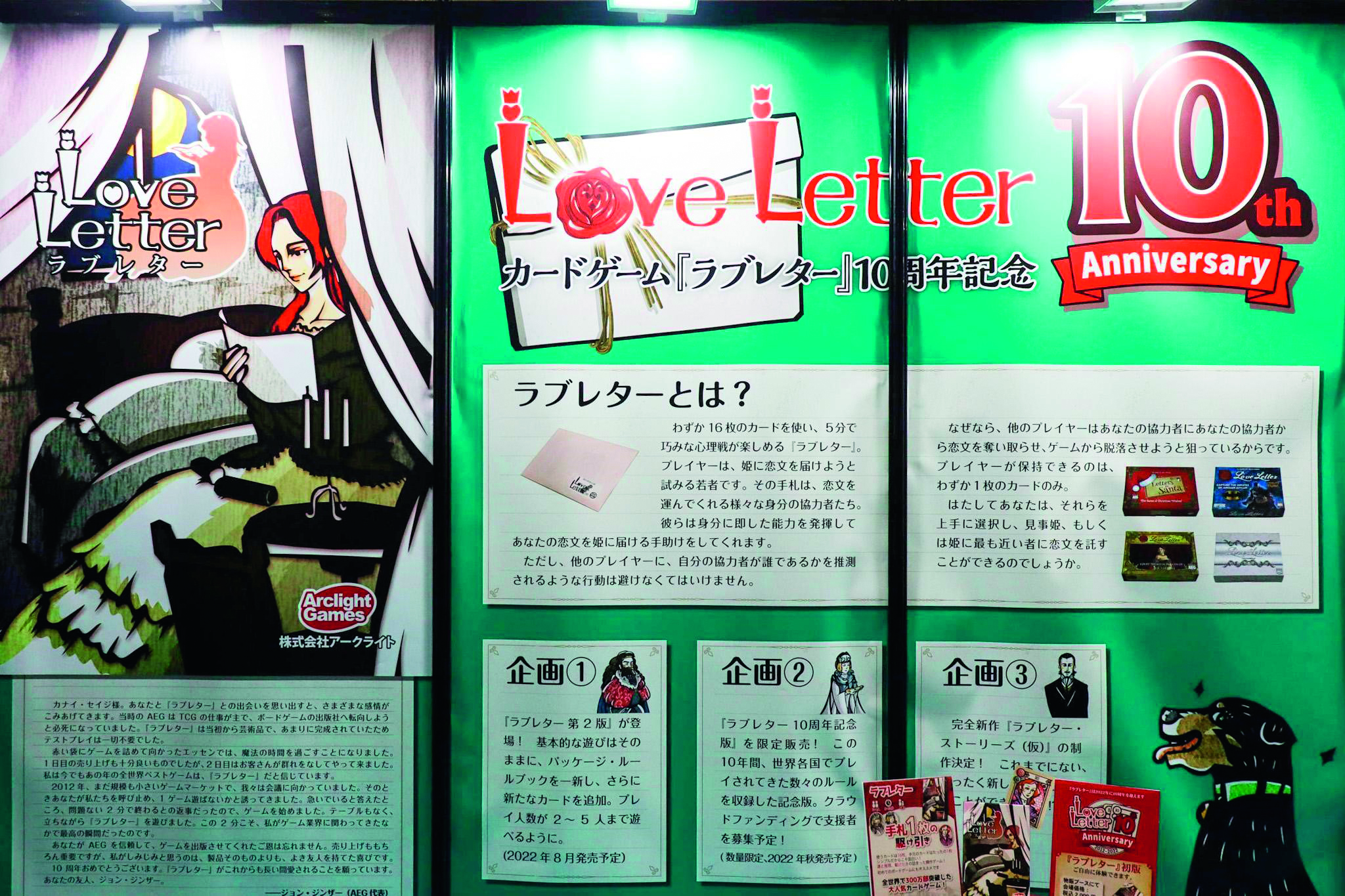 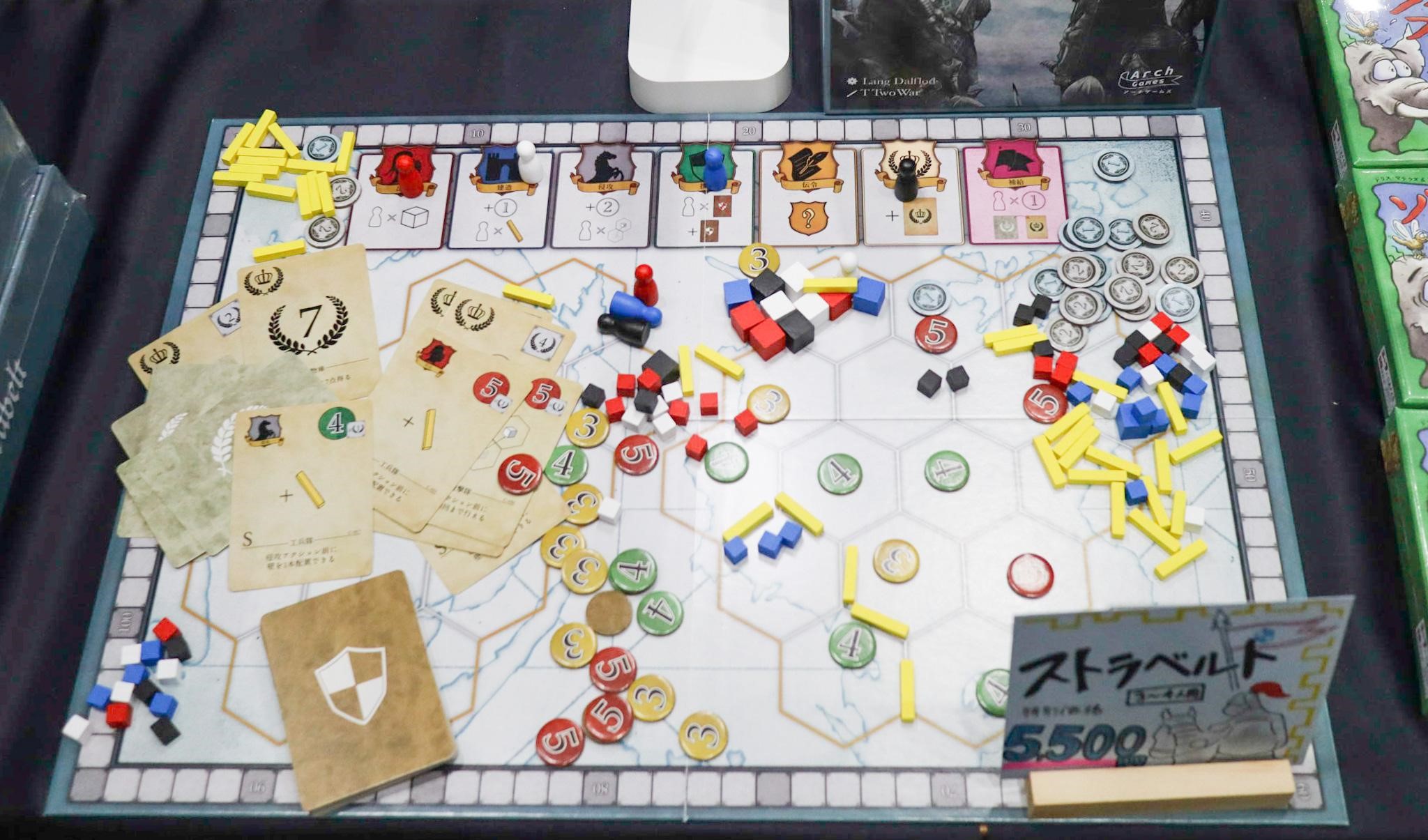 In this area control game to scramble for the territory of the 16th century Scandinavia peninsula, players each send their soldiers to the battlefield and try to acquire the scoring tiles on each land. 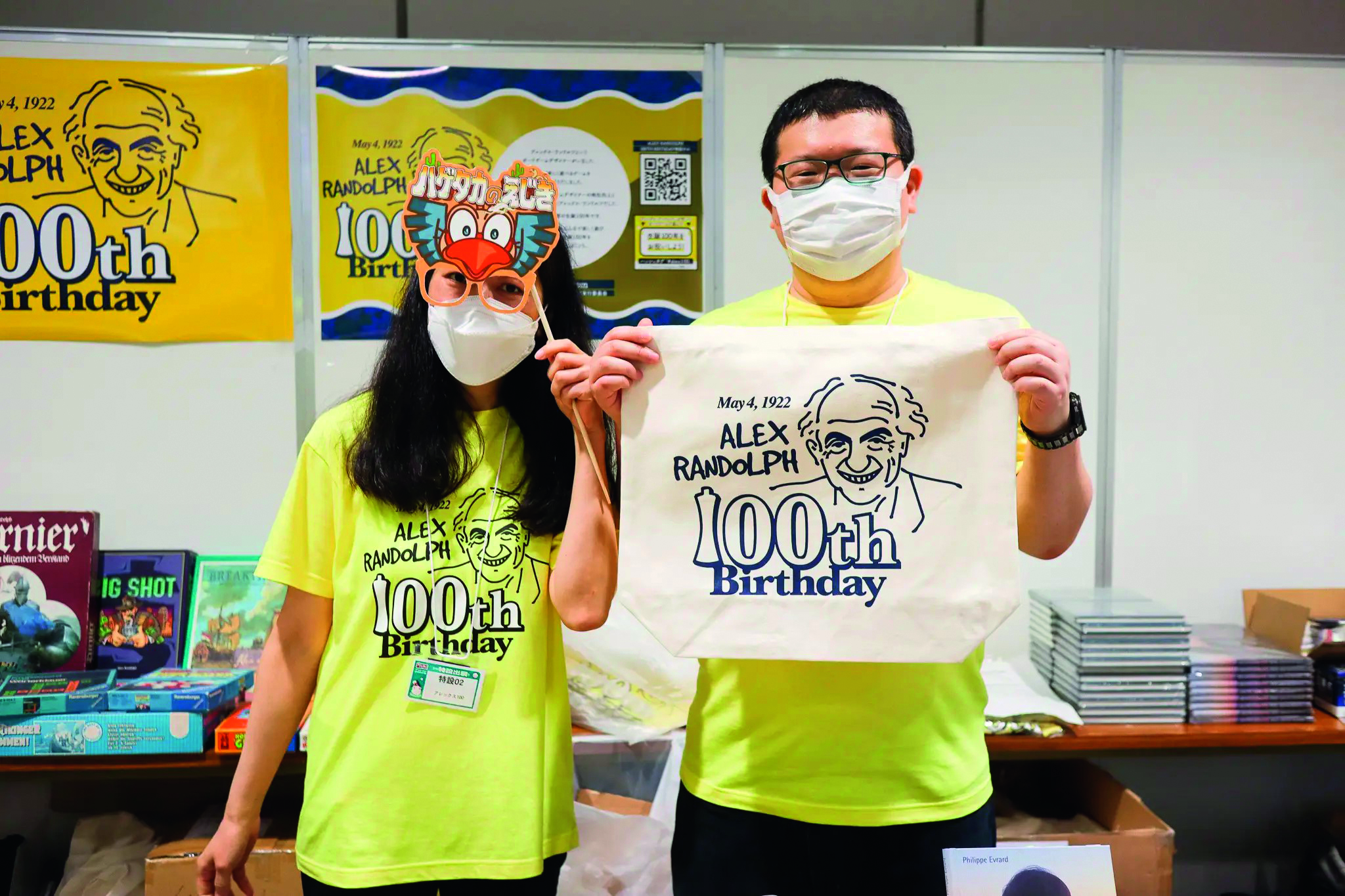 THE 100TH ANNIVERSARY OF THE BIRTH OF ALEX RANDOLPH

There was a special booth for celebrating the 100th anniversary of the birth of Alex Randolph, who designed many long time best selling board games, such as Hol’s der Geier and Geister, that are popular also in Japan.

To commemorate the 100th anniversary of his birth, a special booth was set up at the venue. There were merchandise items, lectures, and demo tables to try out the games designed by Alex Randolph. 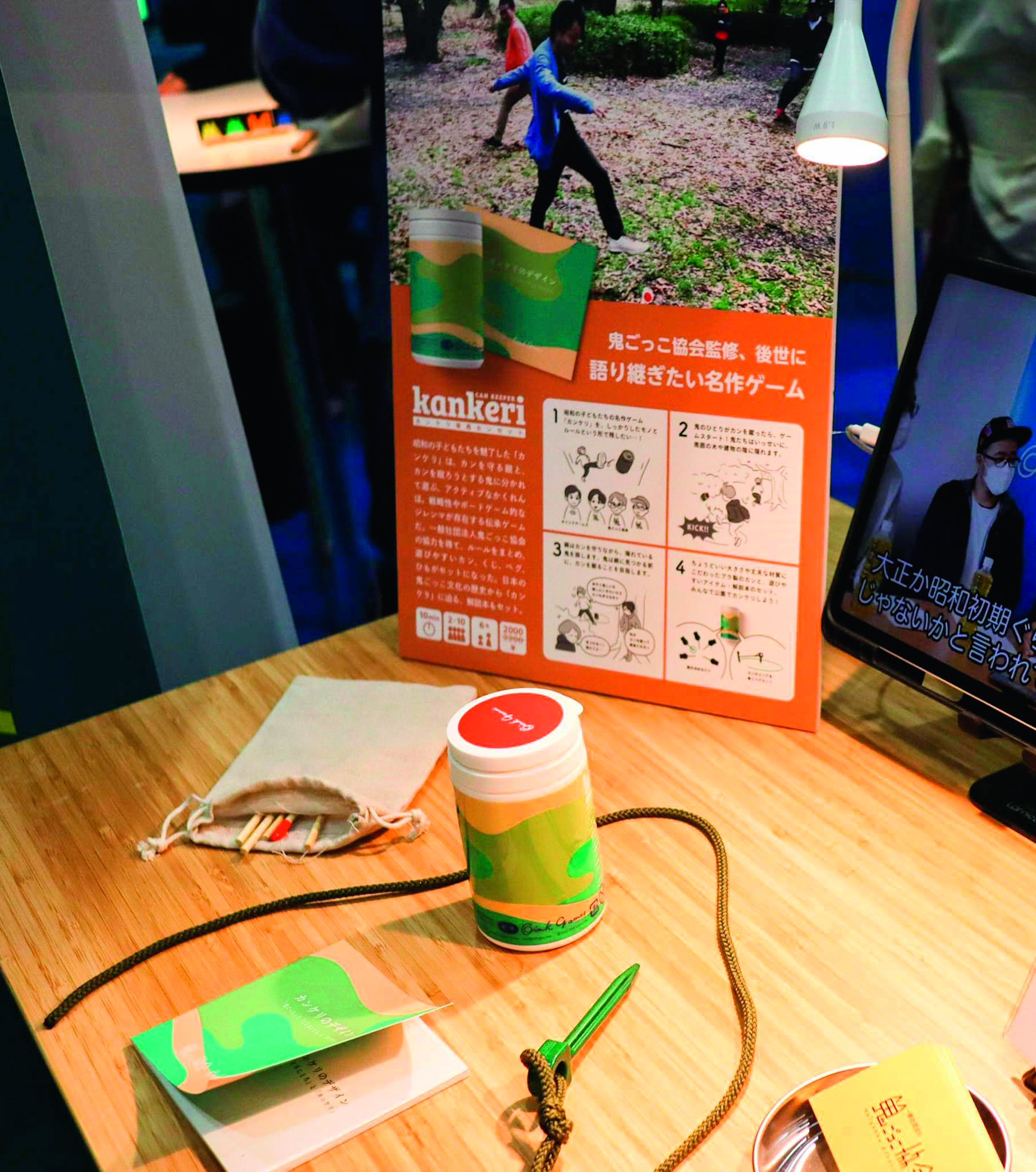 Kankeri (“Kick the Can”), an outdoor activity that fascinated children in the Showa era, had been packaged as a game. Kankeri is a physical activity game in which the Can Kickers try to kick and knock down the can, while the Can Keeper tries to protect the can from them. 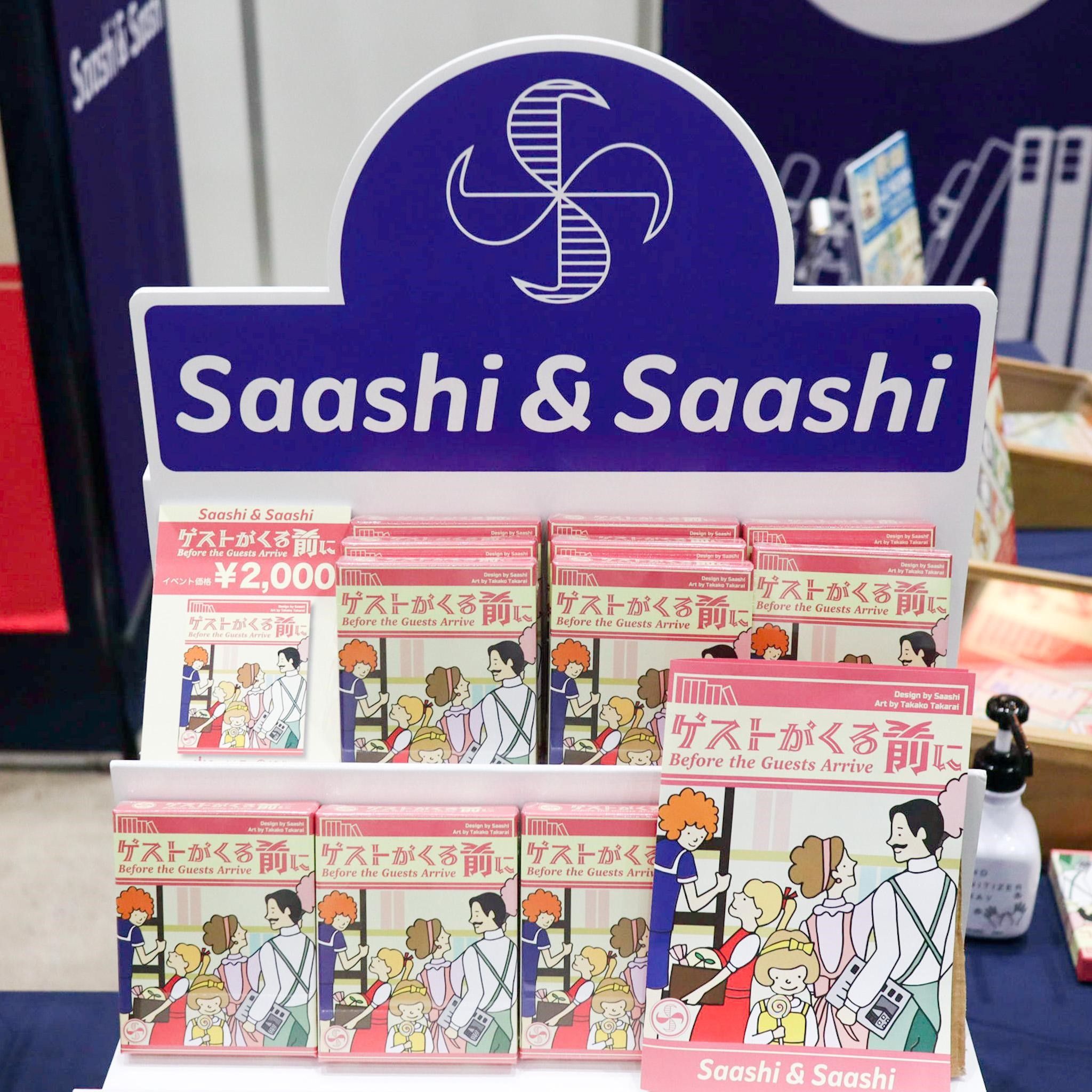 BEFORE THE GUESTS ARRIVE

In this card game, players tidy up a messy house before the guests arrive for a party. There are two pairs of cards, namely family cards and ‘stuff’ cards. Players take turns to take a row or column of stuff cards and then clear these stuff cards by family cards to score points. While you wish to clear the stuff efficiently, the guest might arrive (to signal the end the game) at any time, so you need to balance your actions to collect or clear the stuff before the party. 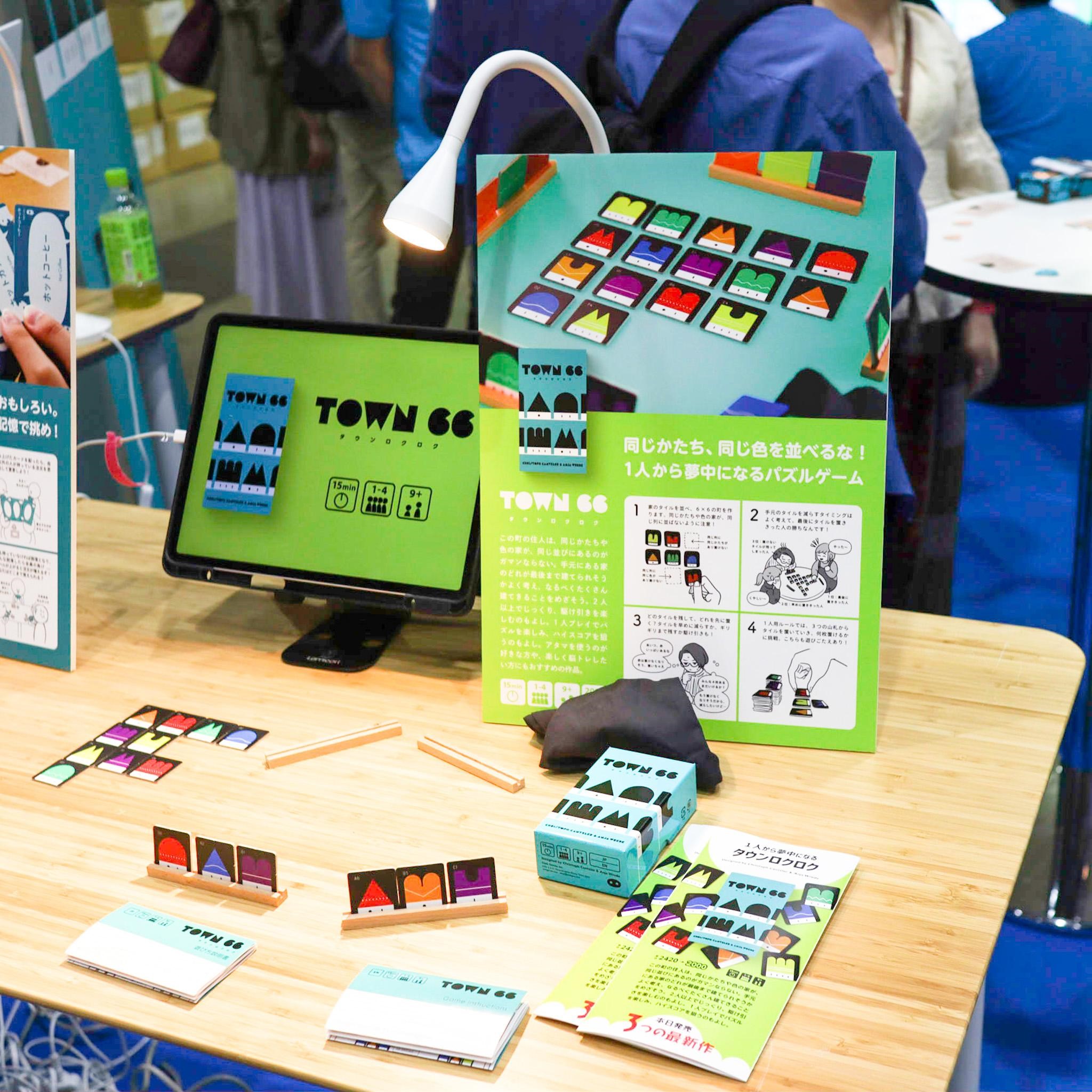 In this game, players take turns to place building tiles in the town of an imaginary 6x6 square. On your turn, place a tile orthogonally adjacent to at least one other existing tile, while making sure that none of the tiles in the same row or column share the same colour or shape. The goal of the game is to place all of your tiles. 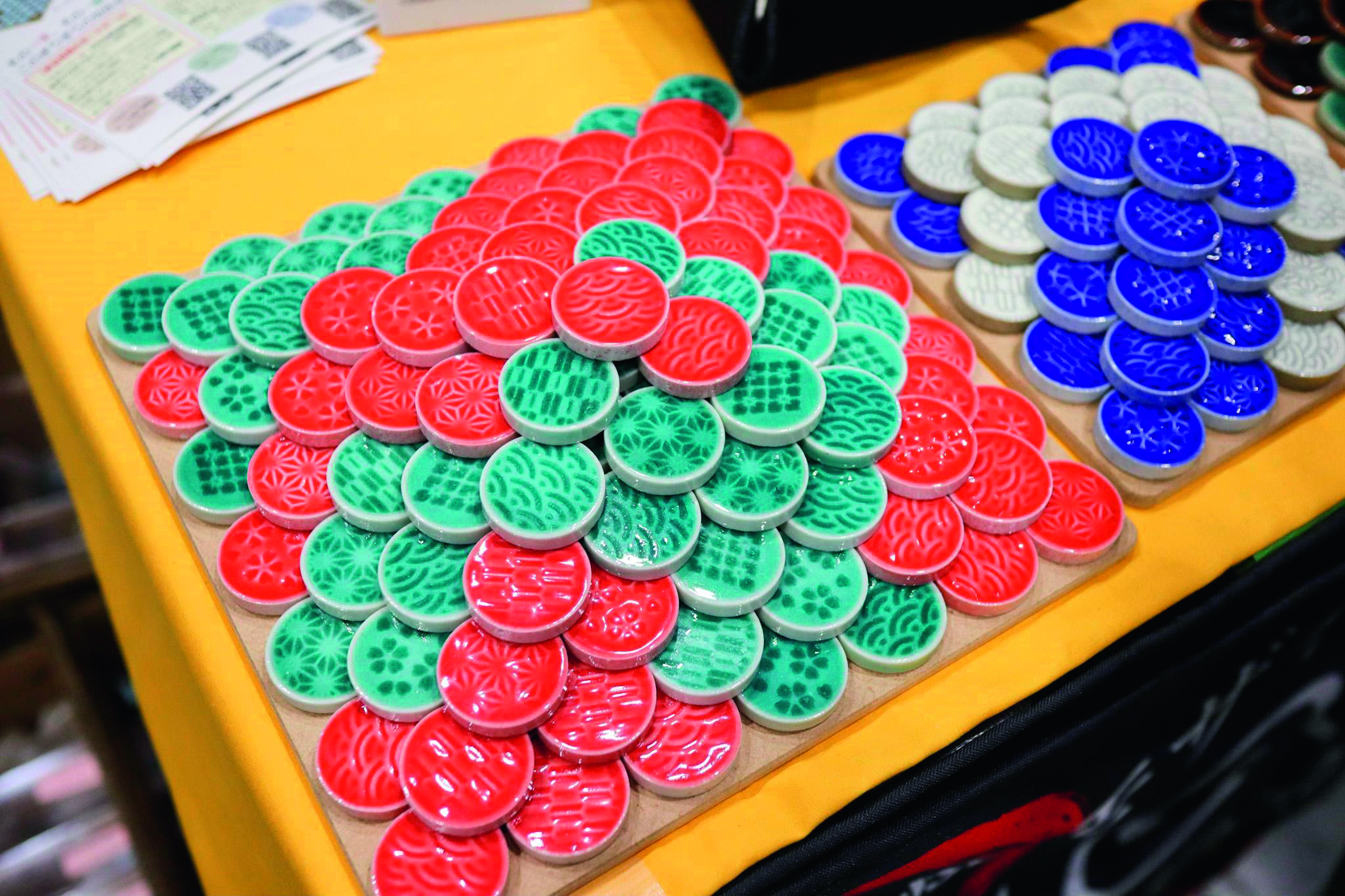 This remake of Upper Hand uses beautiful mosaic tiles from Tajimi City in Gifu Prefecture, Japan. Each player has 70 tiles at the start of the game, and the goal is to place all of your tiles. Each time placing a tile completes a square of four tiles, and at least three of the tiles in that square are a player’s colour, then the player gets to place an additional tile on top of the square. The beautiful mosaic tiles are so eye-catching. 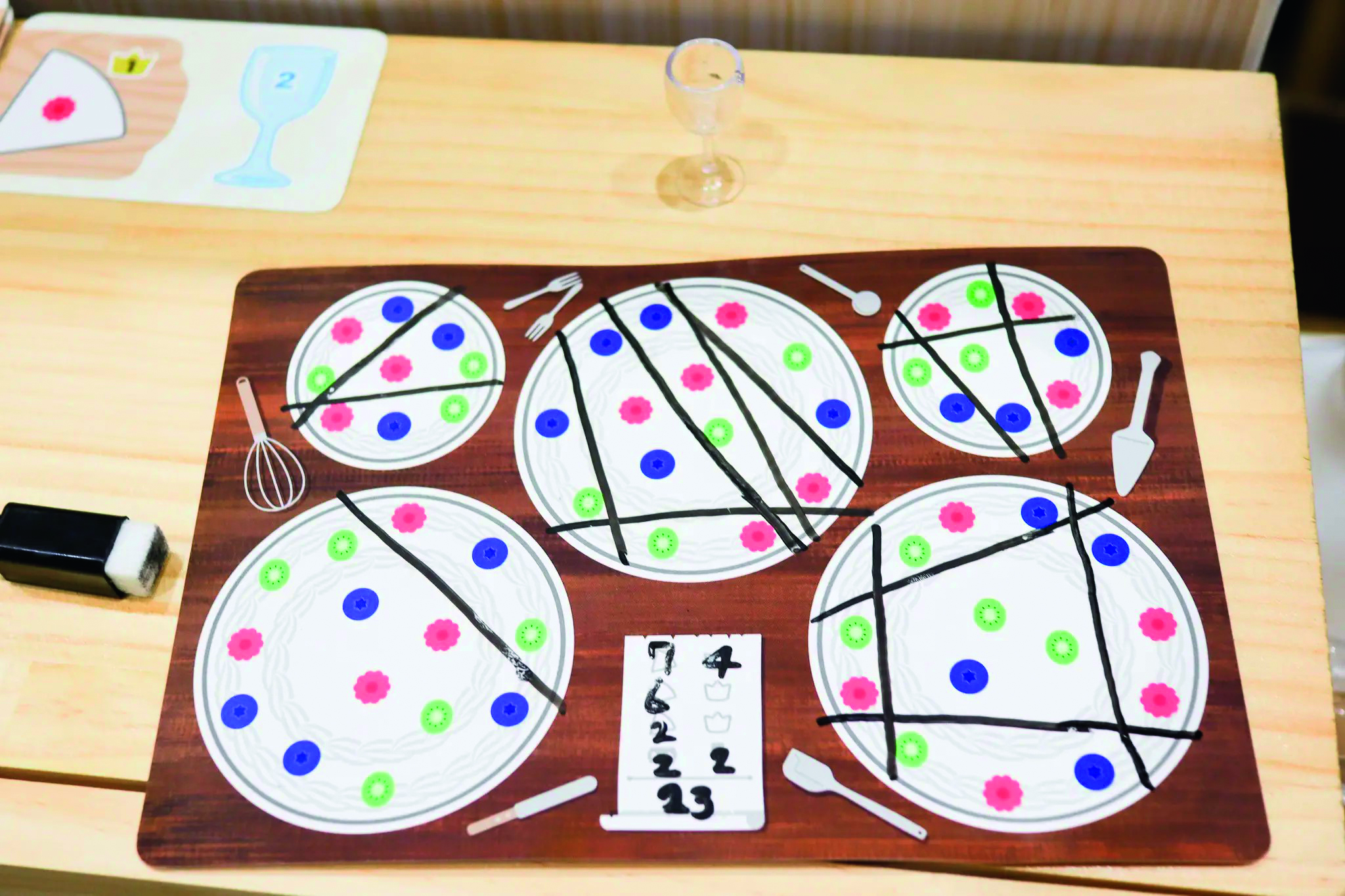 This is a game to cut cakes as ordered in real time. You need to draw each line through the ends of the circular cake. Along with elements, such as playing set collection with the cut cake and receiving bonus for going out first, the game requires quick decision making. 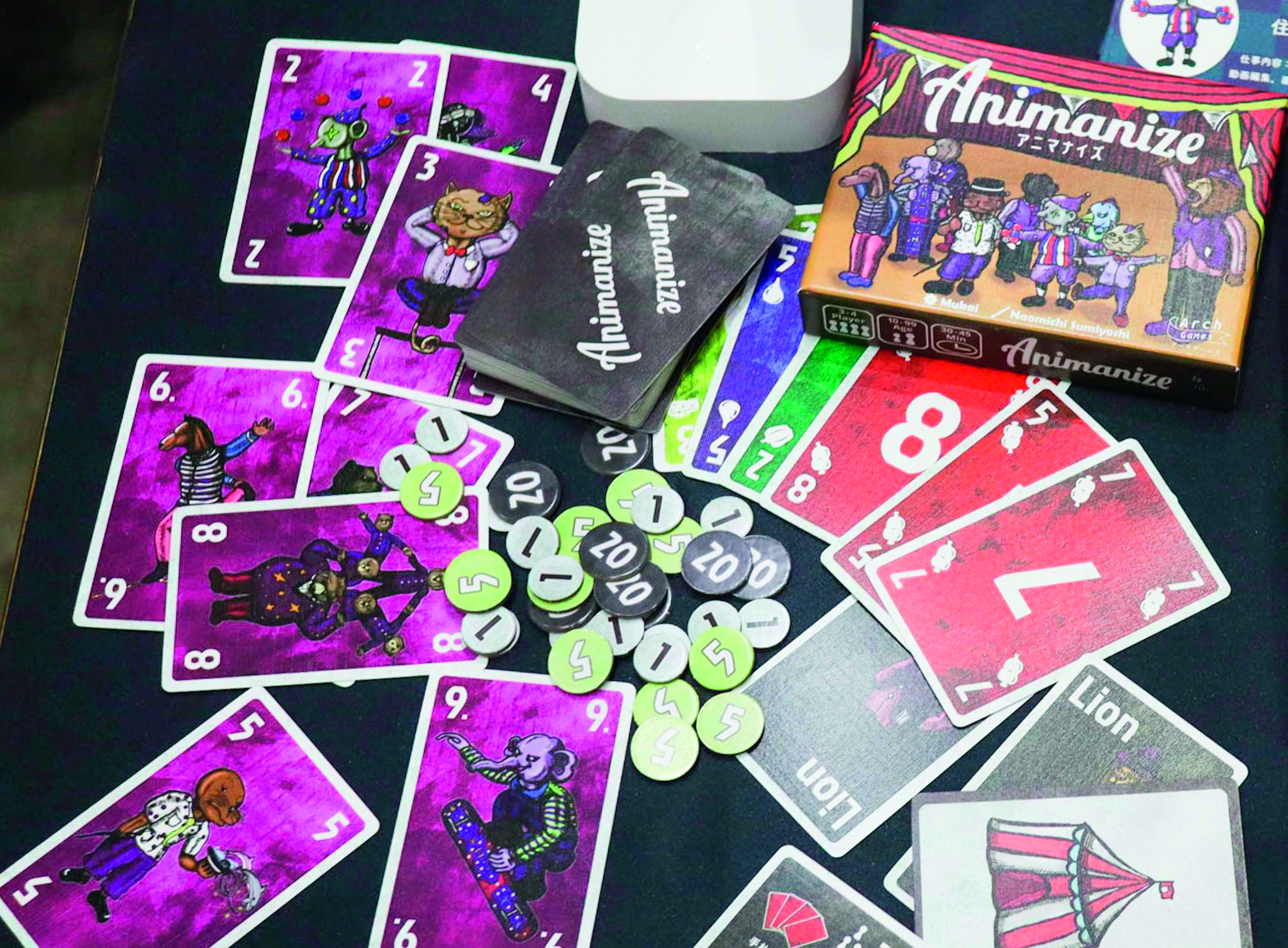 In this trick-taking game, players try to gather circus performers with unusual skills. Try to play the animal cards effectively. Otherwise, you may lose points or drop out of the game. 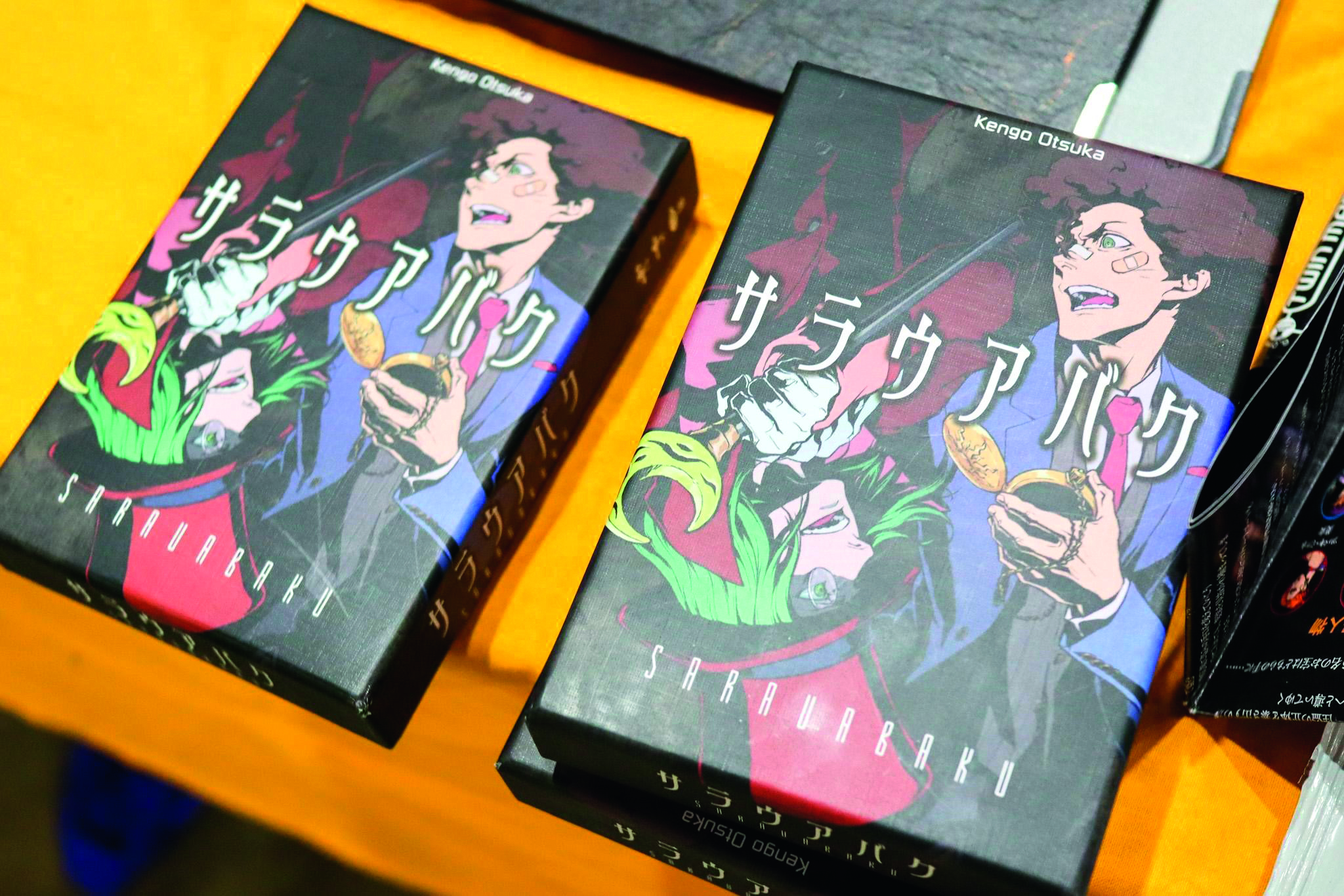 In this two player game, the Thief and Police players engage in a chase over treasures. The character design and writing of the supplied novel are done by Tatsuro Iwamoto and Takeshi Yamazaki, who are famed for their works in the video game Phoneix Wright: Ace Attorney. 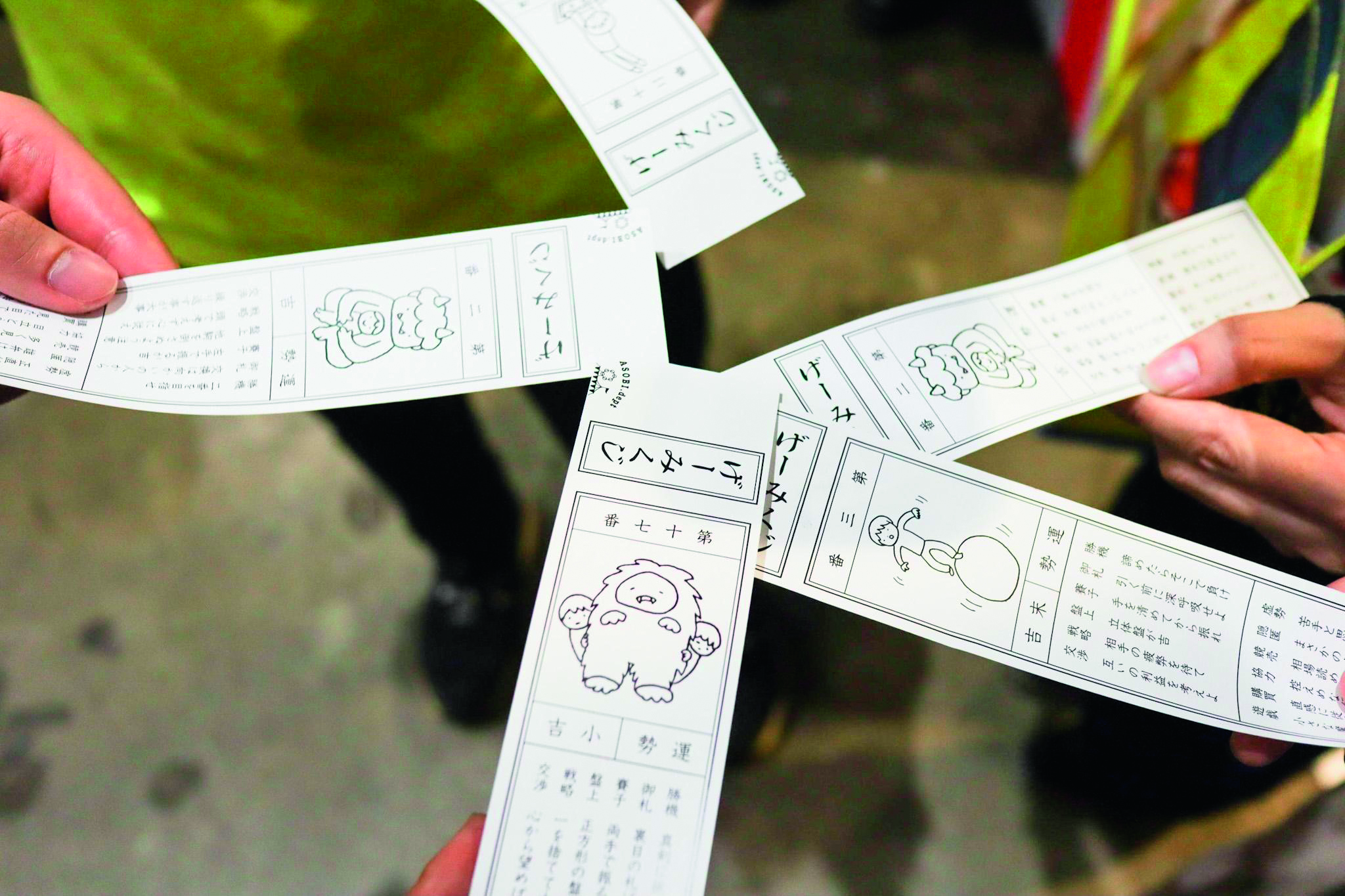 You could roll a die and draw a fortune slip according to the die roll. The fortune slip contains fortunes and advice on playing board games.

And with that, we wish you good luck too. Nico runs Japanese board game website Nicobodo and Saigo can be found on Board Game Geek.