Image above: Necromunda Underhive - certainly a rule set based on the Warhammer 40K background. By The South London Warlords from the SELWG show.

‘I’ve got a great idea for a wargame, I just don’t know where to start.’ I hear a lot of variations of this phrase these days, and generally, I tell people that it doesn’t specifically matter where they start as long as they get to work on it. That’s the single hardest step: committing to a project enough that you actually start writing things down. It doesn’t matter if you begin with the fluff, or the rules for movement, or the campaign system – any beginning is better than no beginning. However, if you want my opinion on the most logical placed to start creating a wargame, I would suggest that you begin by identifying and defining your ‘core mechanic’.

The core mechanic for a wargame is the part of the game in which the player makes his most important decisions. For example, in my game, Frostgrave, the core mechanic is spellcasting. Each turn the player is going to have the option to cast a spell or two, and it is this decision that is going to have the great impact on how the game plays out. When I reworked the system for Ghost Archipelago, I changed the core mechanic from spellcasting to the use of Heritor Abilities. Although the system is completely different, it fulfils the same role in the game. When and how to use those abilities is still the most important decision that a player is likely to make.

Often it is a mark of some of the best games that their core mechanic is easily identifiable. In that classic indie game, Song of Blades and Heroes by Andrea Sfiligoi, the core mechanic is activation. Every time you activate a figure you have to decide how many dice you want to roll, essentially deciding how much you want to press your luck. It’s a wonderful mechanic that means the player has a meaningful decision every time he activates a figure. Another great example of using activation as your core mechanic can be found in the Lion Rampant series of games by Dan Mersey. In these games, every unit has a specific activation number for each type of action in the game. Units that like to charge, have a better activation number for charging. Those that like to shoot at an enemy at ranger have a better activation number for making shooting attacks. This core mechanic forces the player to keep thinking about how to manoeuvre his units so that they generally attempt actions they are more inclined to perform.

If you start thinking in these terms, you will quickly come to realize that just about any aspect of a game can be turned into a core mechanic, and this works best with the mechanic fits the theme – hence spellcasting in a game about wizards. A great example of this is found in the games Ronin and En Guarde! by Craig Woodfield. In these games, every round of combat is a decision-making process, with the player having to decide how much of their figure’s skill should be given to attack and defence. Another great example can be found in the all-time, best-selling space-fighter game. When X-Wing first swept into the market a few years back, it provided a wonderful example of a game that used movement as its core mechanic. Every ship in the game has a set of manoeuvre templates, and the players have to choose one in secret for each ship each turn. It is wildly chaotic, but really keeps player’s heads in the game. It also wonderfully captures the feel of the movies with fighters screaming off in all directions.

Whenever I speak about this, someone inevitably asks me, ‘what is the core mechanic for Warhammer 40K’? I suppose that is understandable, it is the most popular wargame ever, and, in truth, its core mechanic isn’t immediately obvious. Basically, it’s army building. The most important decision you make in most games Warhammer 40K is simply what figures to include in your force. All of the decisions you make during the game tend to be secondary to that (enter ‘Mr MinMax’... Ed.). This is not to put the game down, or say that it is poor game design. In fact, in some respects it is very good game design. Since the core mechanic of the game occurs outside of the game, it means that players can get a lot of enjoyment out of the game – even when they are not playing – just by building different armies. In truth, this core mechanic is seen a lot in the wider world of gaming – just think about Magic: The Gathering. Its core creation is ‘deck building’, an idea which launched the gaming world’s most valuable property and lead to the creation of dozens of imitators. 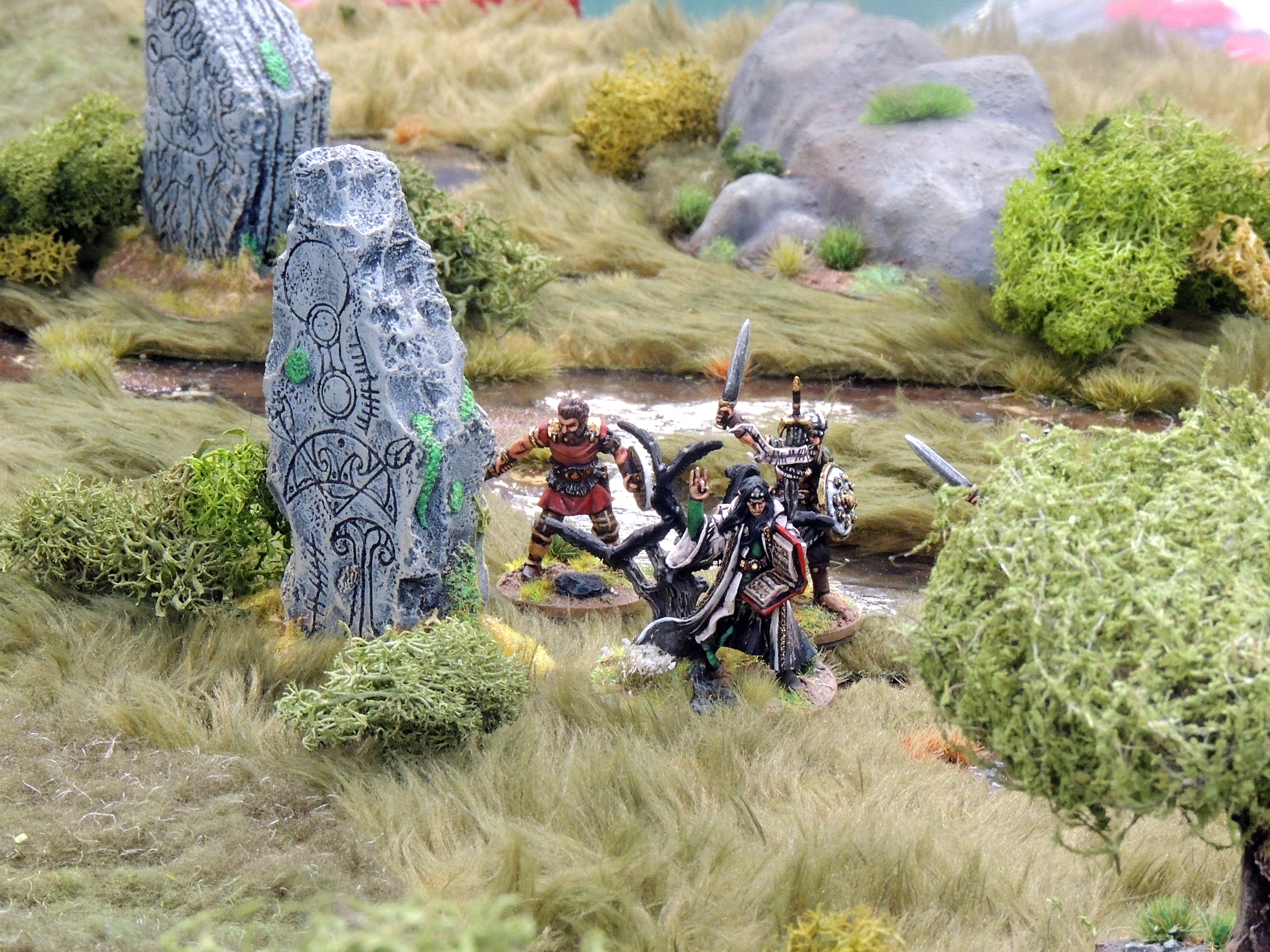 Image above: Some fantasy overland adventure by the Lenton Wargamers using - in this case - Rick Priestly's Red Book of the Elf King rules.

A few wargames have more than one core mechanic, which sometimes work together, and sometimes stand apart. For example in Mike Hutchinson’s Gaslands, there is a large element of ‘army building’ in terms of choosing and outfitting your vehicles, but when you come to play the game, it’s movement that really keeps people involved. So, in this case, you get the fun of the outside-of-the-game creation, combined with a mechanic that really keeps you involved. My forth-coming fantasy mass-battle game, Oathmark takes a similar approach. Outside of the game, you first have to build your kingdom, before you can construct your army. However, the real key to the game once it is on the table is the activation system and the order in which you activate your various units.

A game designer need to be careful not to get carried away, however. While a game needs a core mechanic to make it fun and to set it apart from other games, you really don’t want to try and make every mechanic in the game ‘core’. Think about it: if on every turn you have to really think about how you activate a unit, how you move it, how you fight with it, etc. players will quickly grow exhausted... It is better to focus on your one or two core mechanics, and then use familiar mechanics for the rest of your game. Have you ever wondered why so many games have figures move six inches in a turn? It’s because, in most games, movement is not a core mechanic. In fact, any movement number would do, but 6” feels about right, and people are used to it. Changing it would just lead to confusion, so if it is not necessary, why do it? 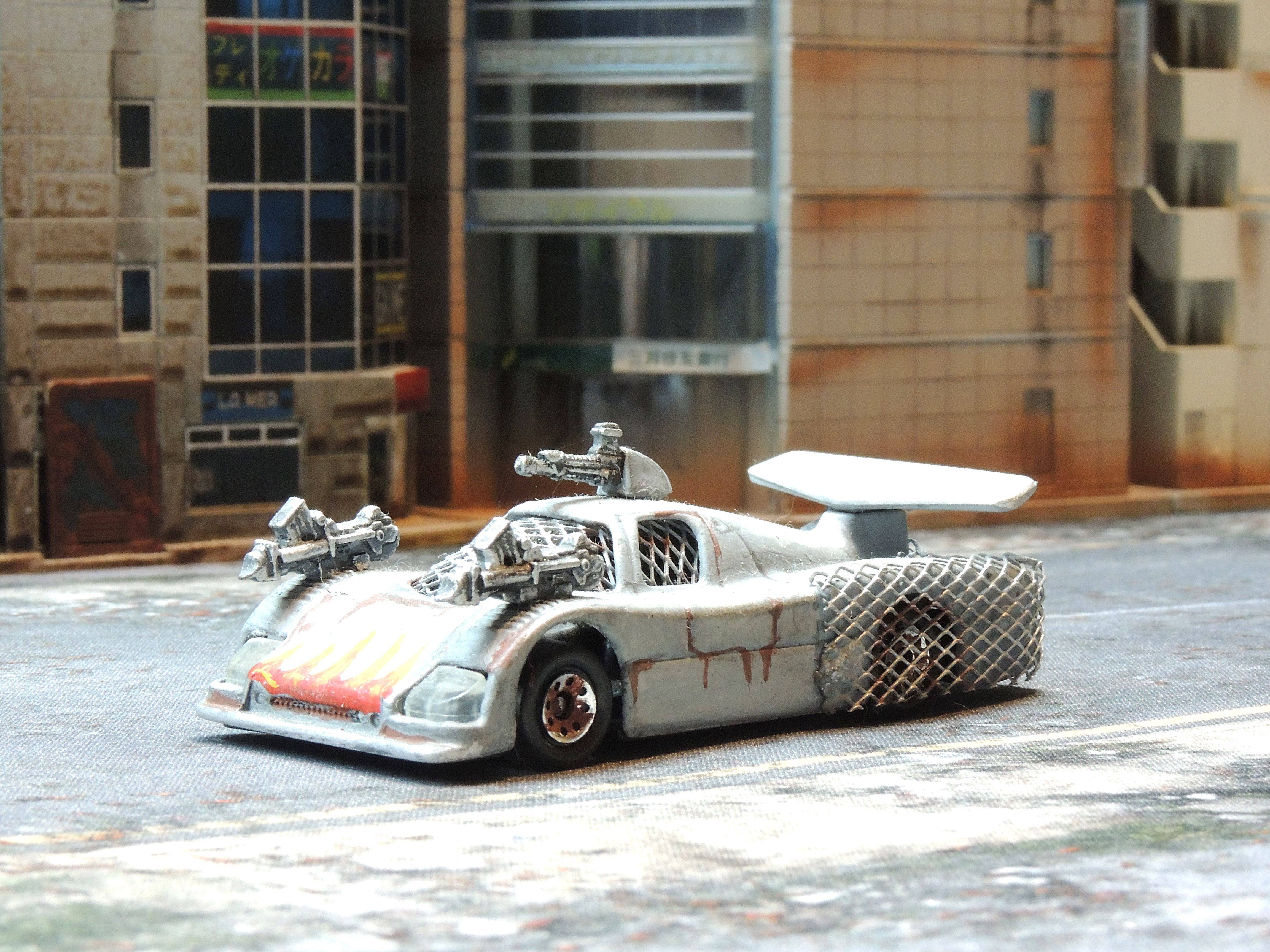 Image above: A matchbox car converted for Gaslands or similar rule sets. From the Editor's collection.

So, if you’ve got an idea for a wargame, and you aren’t sure where to start, then start with the core mechanic. Ask yourself, what is it that I want players really focusing on during their turn. Is this a game about movement? Is it about intricate sword-play? Is it a game about casting spells? When you know the answer to that question, you can design your core mechanic around it. Once you have that, other mechanics can be added in to support that one. If there is a clever way that two mechanics can work together, go for it. Don’t force it though: if it really isn’t a game about movement, then six inches a turn works fine!

Words by Joseph A. McCullough

This review originally appeared in Issue 438 of Miniature Wargames  . Pick up the latest issue in print or digital here or subscribe to make sure you never miss another issue