Arkosa: The Sci-Fi Game That Doesn't Take Itself Too Seriously – An Interview with Designer Angela Dickens 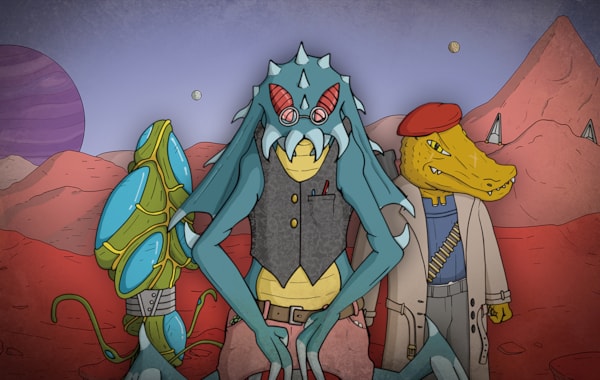 Do it for the nerffles 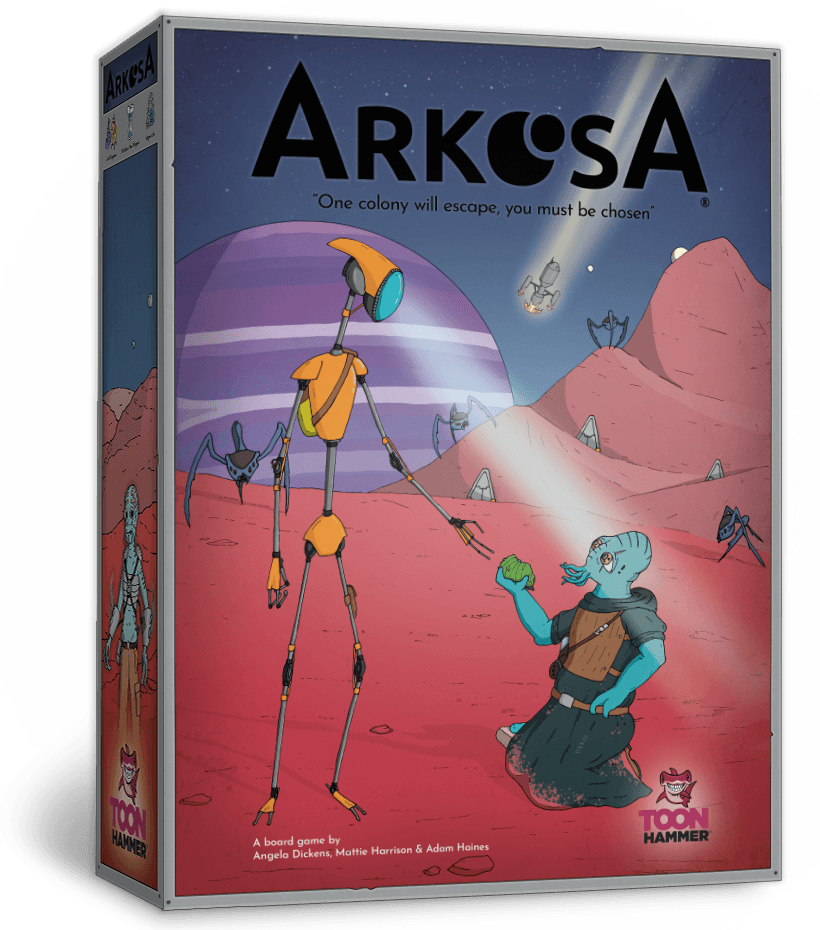 Toon Hammer is “well, pretty much me!”, designer Angela Dickens, explains to us. Named after a division in football team loyalty, Toon Hammer was established a just a few years ago, with the game Gobblin’ Goblins, alongside the artwork of Dan Prowse, and now it’s heading back to Kickstarter in just a few days’ time with a brand new game: Arkosa.

We chatted to Angela Dickens about the game, answering a few questions. What is it? How did it come about? And importantly – why should you check it out on Kickstarter when it goes live on 22 June 2021?

Or, head straight to the Kickstarter by clicking here!

“Arkosa is good old fashioned science fiction, post-apocalyptic, bunker building, board game fun,” Dickens says. “A planet once good and prosperous, since turned chaotic and hostile by a mysterious event”.

That’s where we begin, atop the foundations laid by Firefly, Planet of the Apes, or Mad Max, but making a new turn into a board game. Arkosa is a tableau and action pool building game, where Dickens says, “board game wise, it’s sort of Dead of Winter meets Above and Below”. The game will force you into tricky decisions, with the feel of a euro game, but with added events to keep the theme present and engaging. 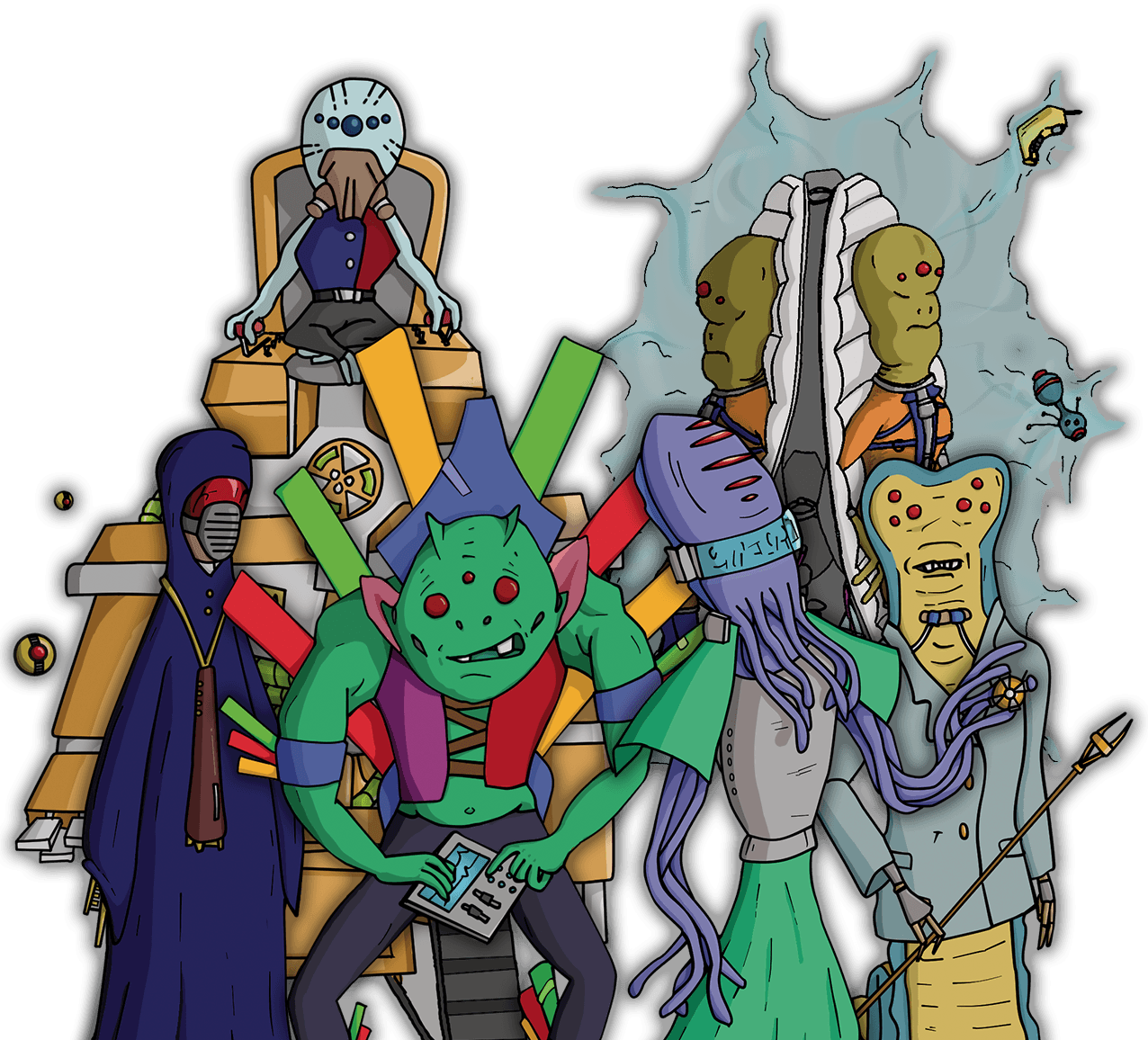 “As a player, you must take charge of some of the poor creatures left abandoned there, by building and running your own bunker colony.” Dickens explains. “It can’t all be bad news though, a passing mining ship has picked up the global distress beacon and agreed to take one lucky colony off the planet! So it’s a mad scramble to accumulate precious reputation points so that your people (I say people, but some of the weird and wonderful creatures of Arkosa are very far from person-like entities, as you’ll see) might be deemed worthy of salvation”. 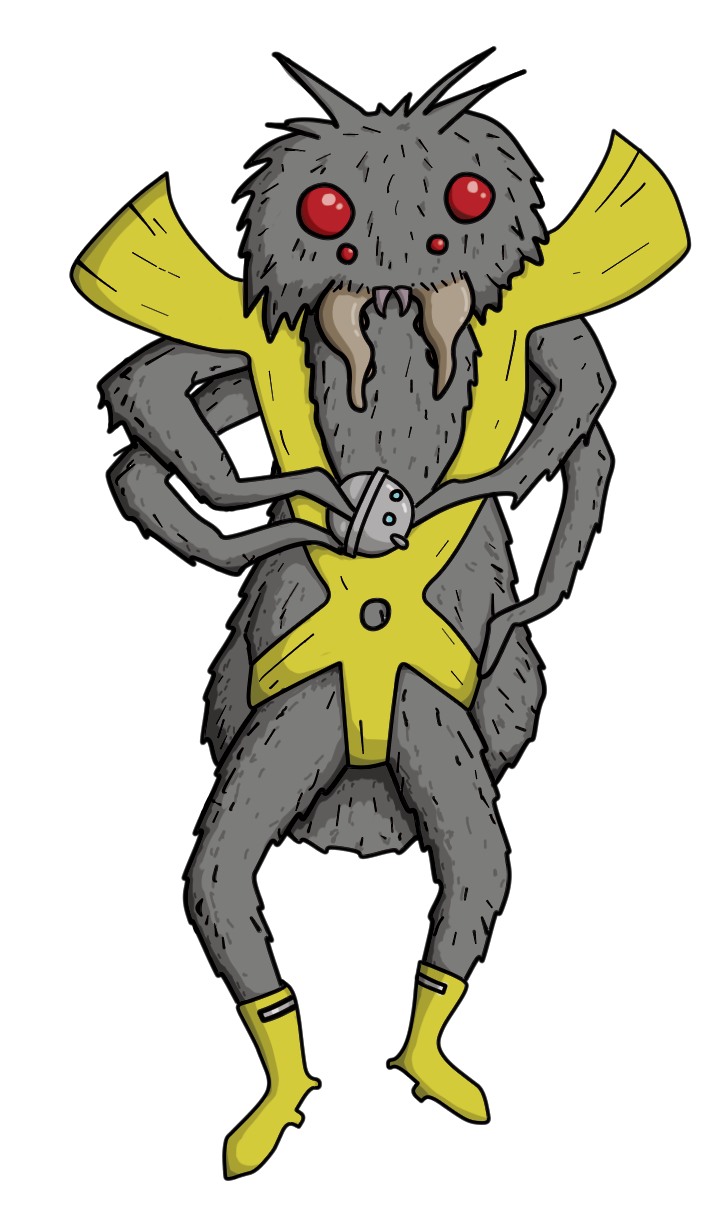 And we certainly do see. With funky art, each character takes its place amidst the unusual landscape. Take the Tamma Hellee for instance, which you’ll see to the right – is it a bug? Is it a Power Ranger? Of course not, it’s just an Arkosa colonist. However, each of these has different and helpful skills, which contribute to making your bunker the top choice for the coveted passing rescue ship. The problem is, some are more volatile than others, and you’ll find yourself needing to be more ruthless to maximise your precious space as the game goes on.

Surprisingly, its origin wasn’t inspired by a rewatch of an old sci-fi classic though (or even Futurama), but rather delightfully through a personal card.

“The idea for Arkosa came about when my good friend Mattie Harrison, delivered me one of their usual hand drawn birthday cards.” Dickens explains. “Their cards would always depict two alien-like creatures in a desolate landscape, with one presenting the other a birthday cake. I’ve always adored those drawings and wanted to do something with them so I floated the idea of turning them into a board game. It was agreed upon and the Arkosa project began!”

“The illustrations pretty much dictated the genre of the game. With the help of Adam Haines, the plot and tone of the game emerged. Adam writes all the narrative in the game (with the exception of the Dr. Sawbones cards, a wonderfully inept medical practitioner that I imagined into existence), the event cards and the little bits of flavour in the rulebook.”

The illustrations are notable in style, differing from those within its genre, something which Dickens hope will help it stand out in the sea of Kickstarter projects. What’s almost immediately evident from this, is the tone of the game. “Thematically, the game doesn’t take itself too seriously”. Dickens confirms. Indeed, from picking up the box to checking out the components, there’s an element of whimsy that suggests you’re not going to have an Alien experience. 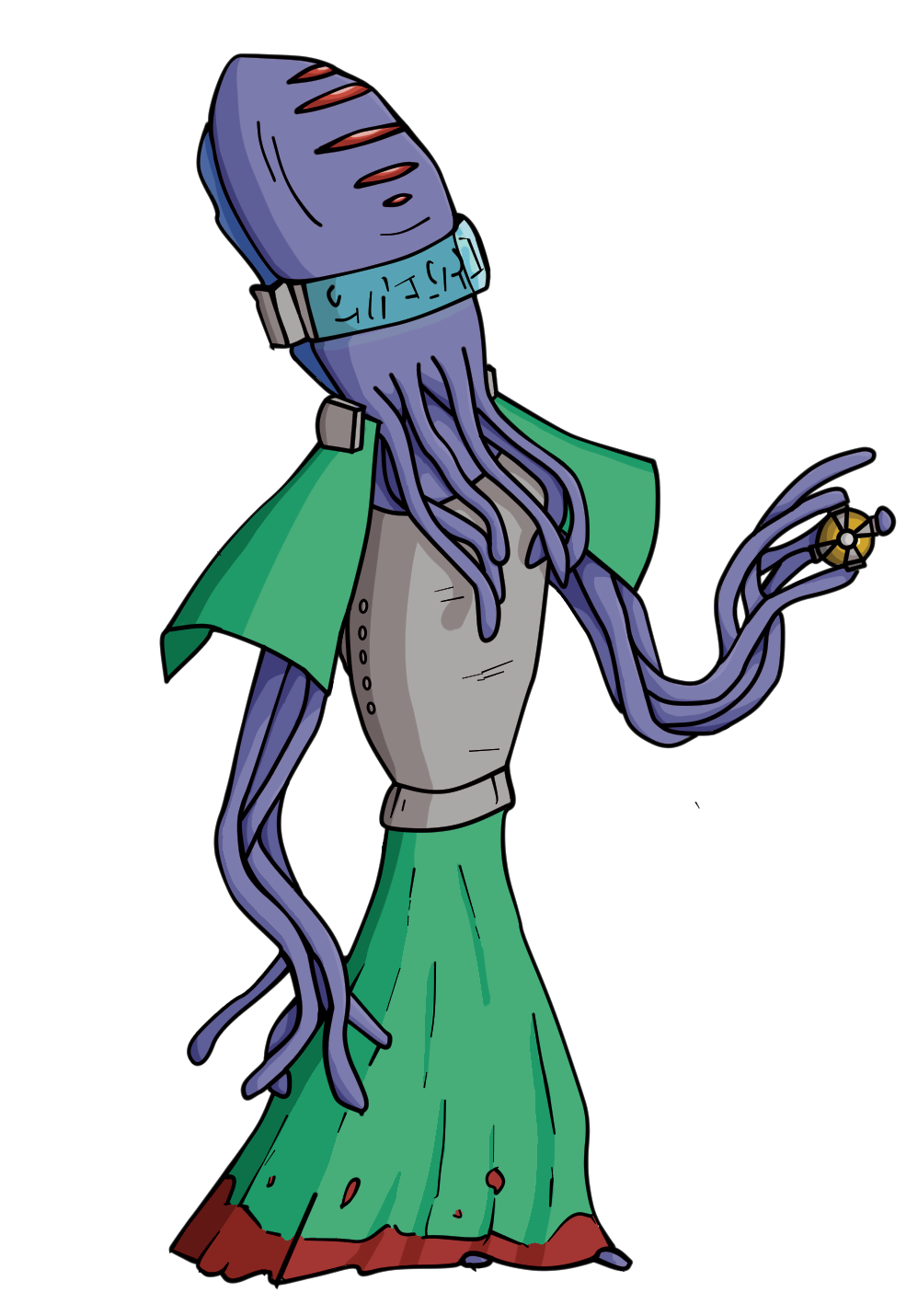 “It’s full of lots of tropey fun from the sci-fi/post-apocalyptic genre. The tone is very much in the same vein as something like Borderlands, or Portal. I like to create games that have a good sense of humour, but that being said, I also like my games to be good strategic puzzles and have high levels of replayability. Arkosa is no exception to this.”

Not only that, but with lessons learned from Toon Hammer’s first game, that level of fun is open to everyone. “Arkosa is a very different beast to my first game: Gobblin’ Goblins. The gobbos were my first foray into the tabletop design world, and I think starting with a simple card game was a good shout. There’s a lot to learn!” Dickens agrees.

“The goblins turned out to be a real hit with families, so since then, I’ve decided that all Toon Hammer games should be PG. Though Arkosa is targeted more at young adults and fully formed human beings, maybe some of the kids who have been enjoying playing Gobblin’ Goblins over the last 3 or 4 years might now be old enough to take on the challenges of Arkosa”

GETTING THE GAME OUT THERE

Fun comes with hard work though, and as with many games, Arkosa has gone through many iterations. “The most challenging thing has been getting the balancing right. Arkosa is meant to be a fairly brutal planet. We want players to make tough decisions, like whether to deprive their colonists of rations or kick them out of the airlock, and we want to throw out curveballs like an unexpected cloud of pestilence or a raid from the planet’s resident hostile creatures. However, if you make things too brutal and unpredictable then you’re in danger of a player having a bad time. I like it when mechanics and consequences thematically make perfect sense but sometimes, I have had to reign it in a bit so the game still remains enjoyable! 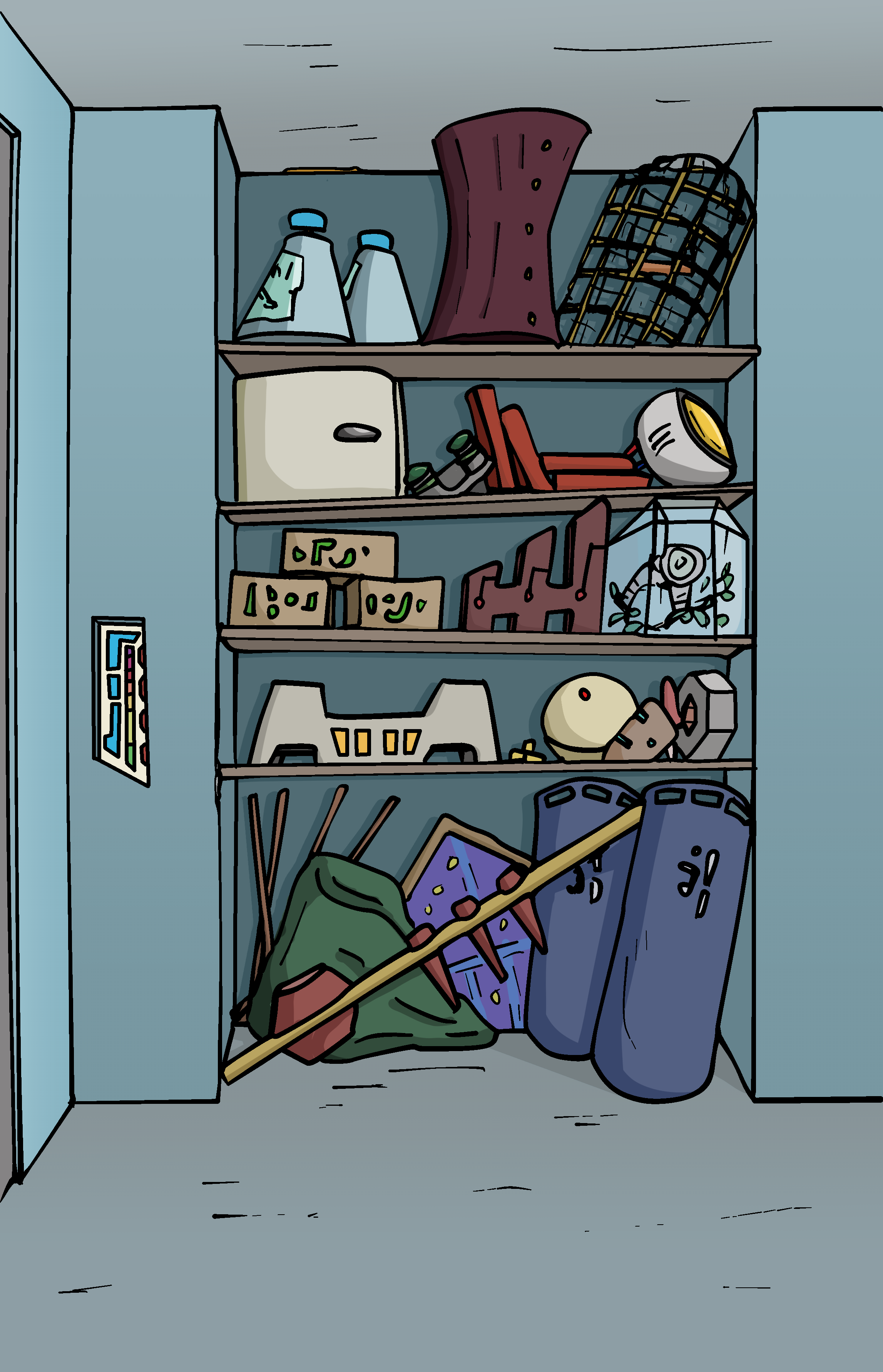 “We’ve spent a lot of time getting the game to events and conventions (pre-pandemic) and doing digital demos (during-pandemic) and generally getting as much feedback as possible.” Dickens goes on to tell us, with the dreaded pandemic forcing everyone to act a little differently to pre-pandemic life. “The input of many has helped shape the game so it makes total sense that we should try and get it made this way. We’ve got all our fingers and toes crossed for a successful campaign”

Whilst the pandemic affected how the game got played, there was an amusing nod to it by coincidence within the game. “A very recent playthrough actually produced a funny realisation”, Dickens tells us of it. “Bunkers in Arkosa are limited to six entities per colony. The rule is only six people are allowed inside together… As of writing this, that is the exact COVID-19 restriction in the UK.” Does this mean the recommendation is to make like the Arkosans and boot an unsuspecting visitor out of the airlock? Perhaps not, but it does make us wonder of some prophetic ability.

“I’m definitely some kind of soothsayer”, Dickens laughs. “I’ll try to use this power responsibly and only win the lottery a few times, promise.”

With the game heading to Kickstarter in a matter of days (June 22nd is the official launch, though you can head to a pre-launch page now to bookmark your interest), we asked about plans for the campaign.

“We’ve got some lovely stretch goals which will be exclusive to the Kickstarter print run”, Dickens answers. “All the good stuff like linen finish cards, UV spot logo, extra content etc. It’s been a long road to get to this point with a big ol’ pandemic smack bang in the middle of it. There've been lots of lovely people who have been so supportive during the development of the game, so regardless of how things go, I just want to say a big thank you”. 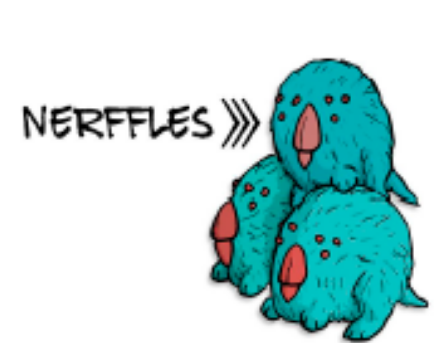 Really though, why should you back this game?

“You should back Arkosa, do it for the Nerffles, they’re blue and fluffy and will bestow a lifetime of bad luck upon you if you don’t!”

The Arkosa Kickstarter begins on 22nd July 2021, and you can click here to set a notification on launch. You can head to their webpage by clicking here, or find them on Board Game Geek here.