‘Alien and Event Horizon were among our first inspirations’: Horrible Games talks Alone Potion Explosion designers Andrea Crespi and Lorenzo Silva are back with Alone, a sci-fi horror dungeon crawler that pits a single hero player against up to three of their evil-doing friends. Horrible Games’ Alessandro Pra’ tells us more about the intriguing asymmetrical game

Could you introduce Alone – what the gameplay is like, how the theme is integrated and the overall ‘feel’ of the game?

Sure! Alone is an asymmetric co-operative sci-fi dungeon crawler by Andrea Crespi and Lorenzo Silva, two of the authors of the award-winning Potion Explosion.

In this kind of game there usually is one single ‘dungeon master’ that controls all of the ‘evil’ stuff going on during the game, while several other players, each one controlling their own miniature, co-operate against them or the game.

With Alone, we twisted the concept upside-down: one player will control the only hero of the game, exploring an unknown map full of dangers and traps and trying to complete missions, while up to three evil masterminds will plot against him in the darkness, trying to kill him.

We don't want to disclose too much about the story of the game – yes, there is one and it spans through several chapters and games – but here's what we can say: the game is set on a distant planet, in an abandoned base, dark and barely operational. He was traveling with a few crewmates, but they've gone missing after they shipwrecked, so the hero finds himself – guess what – alone, without knowing where he is, where his friends are and how to get back home. The place is choked full with dangerous things: monstrous alien creatures, traps and hazards, and even crazy cultists.

Speaking a bit about the core gameplay: the evil players can always see the complete map of the base. They know the exact of position of the hero and where he has to go. They can also play cards to place creature and trap tokens and try to lure the hero towards them.

All of this is hidden to the hero player by a huge, intimidating screen. The only thing the hero can see at the beginning of the game is his miniature and the map sector he is in, represented by a big cardboard tile. The rest is revealed to him by the evil players as he starts exploring around, but danger can always be just around the next corner!

This puts the hero under a big stress, the player really feels alone and in constant danger. Seeing three of your friends plotting against you behind a screen doesn't help in that regard!

The game is heavily story-driven. A scenario will tell the hero where he has to go next, and he can spend his actions to try to get there, alive. Whenever he moves, the evil players will have to check the complete map, and lay down the explored sectors in front of the hero. If he enters a sector containing something nasty, he'll take some kind of damage, be it actual damage, status-altering tokens or being forced to enter a fight.

The hero can also spend actions to explore – forcing the evil players to reveal – sectors without entering them, but this costs him actions, which represent time, and the time to complete missions is limited.

The hero, being an engineer rather than a solider, has other actions he can do, like searching for items and combining them with each other to upgrade them. There is a lot going on in this game! 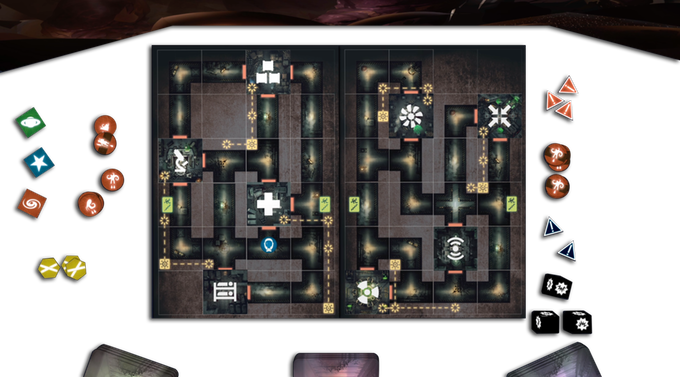 Where did the inspiration for the game’s mechanics and its theme come from?

The initial idea of the game came from Andrea Crespi. As his previous work shows – other than Potion Explosion, he designed 1969 and Apollo XIII – he is a huge space exploration geek. He used to have a huge replica of the Apollo lander in his basement, and he often wears an actual NASA jacket.

Science-fiction movies like Ridley Scott's Alien and Paul W.S. Anderson's Event Horizon were among the first sparks of inspiration.

The game is a reverse of the conventional asymmetrical co-op experience where one evil player battles a group of heroes. Why did you decide to turn the format on its head with a single hero?

Well, no game ever put a single ‘good guy’ against several ‘bad guys’, to our best knowledge. Once Andrea showed that idea to us, how could we resist? We try to do something new and unexpected with all our games – after all, it's kind of our mission.

What else makes the game unique compared to similar titles?

Well, for example: there is a whole radar mechanic that affects the gameplay of both the hero and the evil players. Each time the evil guys place or move anything on the complete map, they produce radar signals they then have to communicate to the hero, such as, “You hear a blip from the north." These clues allow the hero to make deductions on the whereabouts of the impending dangers, and plan a strategy to avoid them. He can also directly use his radar to locate specific target sectors of the map; knowing the distance from a room, for example, and then asking for it again, he can understand if he's going in the right direction or rather moving away from it.

Light has a very important part in the game, too. The environment is usually utterly dark – this is why the hero only sees the nearby sectors on his side of the screen. But if he finds a Light Control Unit he can try to fix it and turn on the lights in all the linked sectors! This is done by turning the actual map tiles on the other side, where they are depicted in their brighter form. This has several benefits for him. For example, illuminated sectors are immediately visible to the hero, and he can see everything they contain without spending an explore action. In addition to that, many of the foes of the game are dark-dwelling creatures that do not like being exposed to light at all, for example, they may deal less damage or no damage at all.

"We are considering making more games with the Alone game system, if it proves to be as popular as we hope it will be!"

You opted to allow a human to play the role of the hero, whereas many games today use companion apps or other AI methods to keep all of the humans on the same side. What is the importance of allowing the hero to be a real person?

To be honest, we simply cannot conceive this game without a human Hero player. Our goal is to have all evil players say, "I wanna play the hero next time!" It's kind of the main concept of the game. It's even in the name!

We think one of the strongest features of the game is the kind of challenge that is created between the hero and the evil players; there have even been unexpected emergent gameplay mechanics during development because of this. For example, the evil players just need to communicate with each other. Each one of them has different assets at their disposal – personal cards, for example – and to optimise their strategy they need to co-operate. But the hero is just at the other side of the table, and any information he can intercept may be a life-saver. So as they get better at the game, we see the evil players developing a silent language made of gestures, encoded messages and poker faces. By making one side of the game automatic, we would completely lose this kind of feeling.

You’ve taken Alone to Kickstarter. Why was this the right choice for you?

Alone is our first dungeon crawler though, and our first game with miniatures, too. It's our biggest project, by far. And bigger projects are more expensive, of course! Dungeon crawler games with lots of miniatures are quite popular on Kickstarter, so we thought: "Why not?" We've been curious about it for quite some time, and this seemed like the perfect chance to give it a try. 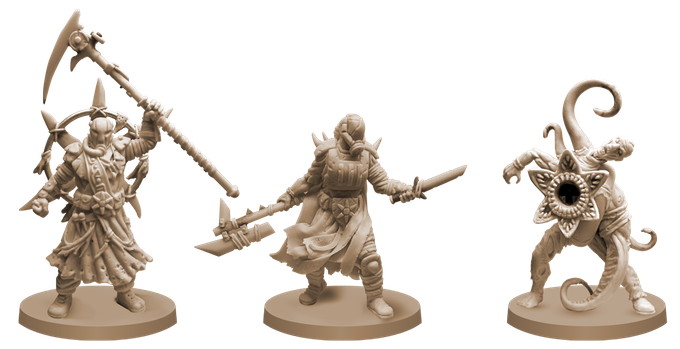 How does the game differ to your previous games such as Potion Explosion and Raise Your Goblets – is it more complex? Longer to play? More competitive?

More complex and longer to play for sure. More competitive... maybe that too. It's by far the game that creates the most tension on the table, among our games. Potion Explosion is competitive, but it's a puzzle game. Steam Park is, too, but more in a light-German game sense. Raise Your Goblets is a party game, so it's not really comparable. Dungeon Fighter may be considered equally competitive, but in that case we have all humans play together against the game so the competition is only against the game.

How has your experience designing and publishing your past games helped with the development of Alone?

Both a lot, and none at all. We start each new game thinking that the lessons we learned will make the next game easier, and in a sense they do, but you also always face unexpected challenges that make your life more difficult than what you would like either during the design or the production stages.

What plans do you have to support Alone post-release?

We are even considering to make more games with the Alone game system, if it proves to be as popular as we hope it will be!