Adapting Digital Games to Tabletop With The Binding of Isaac Designer Edmund McMillen, and CEO of Maestro Media Javon Frazier This article originally appeared in issue 62 of Tabletop Gaming. Pick up the latest issue of the UK's fastest-growing gaming magazine in print or digital here.

We often write about adaptation, translation, and conversion of videogames to their board game counterparts – it’s a tricky job. Luckily Ed McMillen and Javon Frazier are here to talk us through their experiences and their tips for going from digital to analogue.

It started with the flu. Ed McMillen, the designer of The Binding of Isaac and Super Meat Boy on our screens and Tapeworm and Binding of Isaac: Four Souls on our tabletops, decided to prototype something on paper. This ended up being Four Souls. Within a couple of days, the game was ‘fun enough’ at the kitchen table with his wife that McMillen got in touch with Javon Frazier. Frazier had previously contacted the designer to discuss licensing The Binding of Isaac – knowing a thing or two about how to give a community what they want. Two days later he was playing the game at the same kitchen table.

“It was fast,” says Frazier, the CEO of Maestro Media and previously of Marvel.The crew was filming the trailer within a week of this meeting, with the Kickstarter being planned almost immediately.

“I think we launched the Kickstarter in June and we delivered in November of that year,” says Frazier, “it was quite the whirlwind.”

Which isn’t how every videogame conversion goes. Steamforged Games, known for their adaptions of big miniatures tie-in games, produce games at an impressive enough speed of one-ish a year. Others, like the mammoth-sized box of Assassin’s Creed: Brotherhood of Venice – four years in the making – show that it’s not always smooth sailing. To get Four Souls out took more than just the effort for the designer and publisher.

“I wouldn’t want someone else to do it,” says McMillen, talking about other IP-attached board games, “but Javon was cool with whatever level of involvement I wanted, which was better.”

Binding of Isaac is partially a roguelike, partially a ‘bullet hell’ game – the latter portion being about huge number of projectiles that need to be dodged to survive. Traditionally there’s been a great difficulty in making the arcade feel of these reflexive games work on the tabletop. For McMillen, it was a freeing experience however.

“The main thing for me that was most interesting, apart from making a game with my wife, was to do something without a programmer,” says McMillen, “I can’t program, so I always have to work with a programmer, so it was nice to have that freedom.”

Tapeworm, a game that was released during the pandemic was prototyped in 2010, well before Four Souls. But with Javon’s backing, there was the motivation to get the game ready as quickly as possible.

“It was fun because it was pure design for the most part, which is what I really enjoy. And it was narrative design translation.” 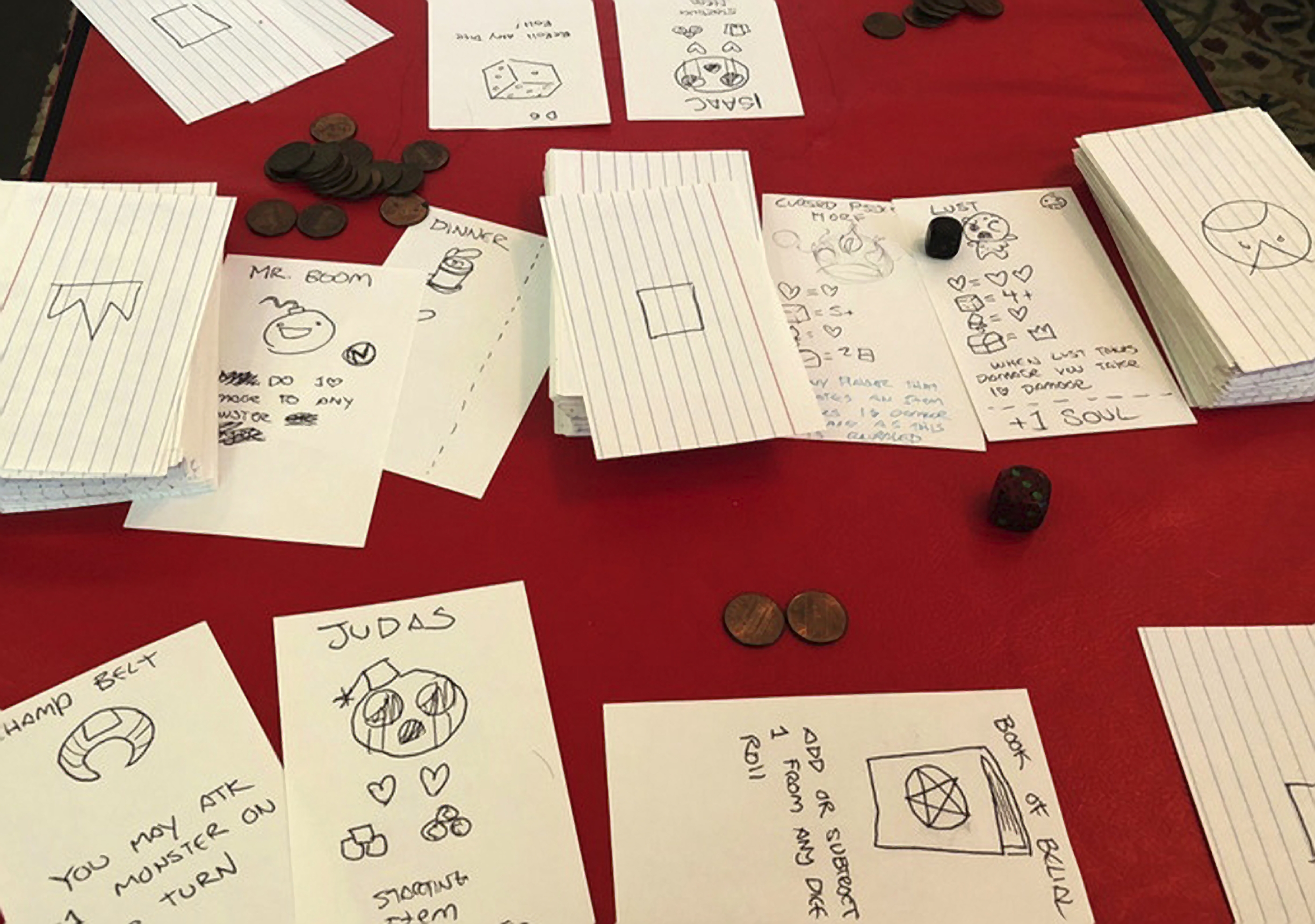 McMillen explains how he wanted to move from the nerve-twitching gaming of the digital game to something that had straightforward randomness – using boss design as an example of that narrative translation.

The Duke of Flies is a boss in The Binding of Isaac whose cloud of flies (see name) is extremely annoying – you have to hit his flies to get through to him. McMillen asked himself how to simulate that in a card game in combat abstractly. The designer decided that, whenever you hit him, you roll a dice to see if you hit one of his flies instead, negating the damage.

“It’s really fun to figure out how to translate those mechanical elements into the physical card game, using the new mechanics which have nothing to do with The Binding of Isaac. There’s no shooting, there’s no dexterity involved. But how I translated the item collection, the growth of your character, the difficulty of bosses – but also intertwined the versus and co-op play and the politics that go into a game like that.”

McMillen explains how he went through rapid playtesting by saying, “it was like rapid prototyping for a video game, but fun all the time,” before both he and Frazier laugh, “no one in the early versions of playtesting videogames is having a blast.”

Usually in playtesting a video game you watch someone play, and attempt to observe points of frustration, failure and analyse input data to see where players stop having fun. Early versions are even worse, with the necessary brokenness of in-development video games inhibiting most of the available fun.

“I could see the visual feedback, the smiles, the frustration, the emotional peaks and play off that. A lot of that had to do with rolling dice, which I think is a weird primitive, visceral thing for people which works so well,” says McMillen, “it’s not only good for the roguelike and random aspects of binding of Isaac, but also is just a fun things to do with each other.” 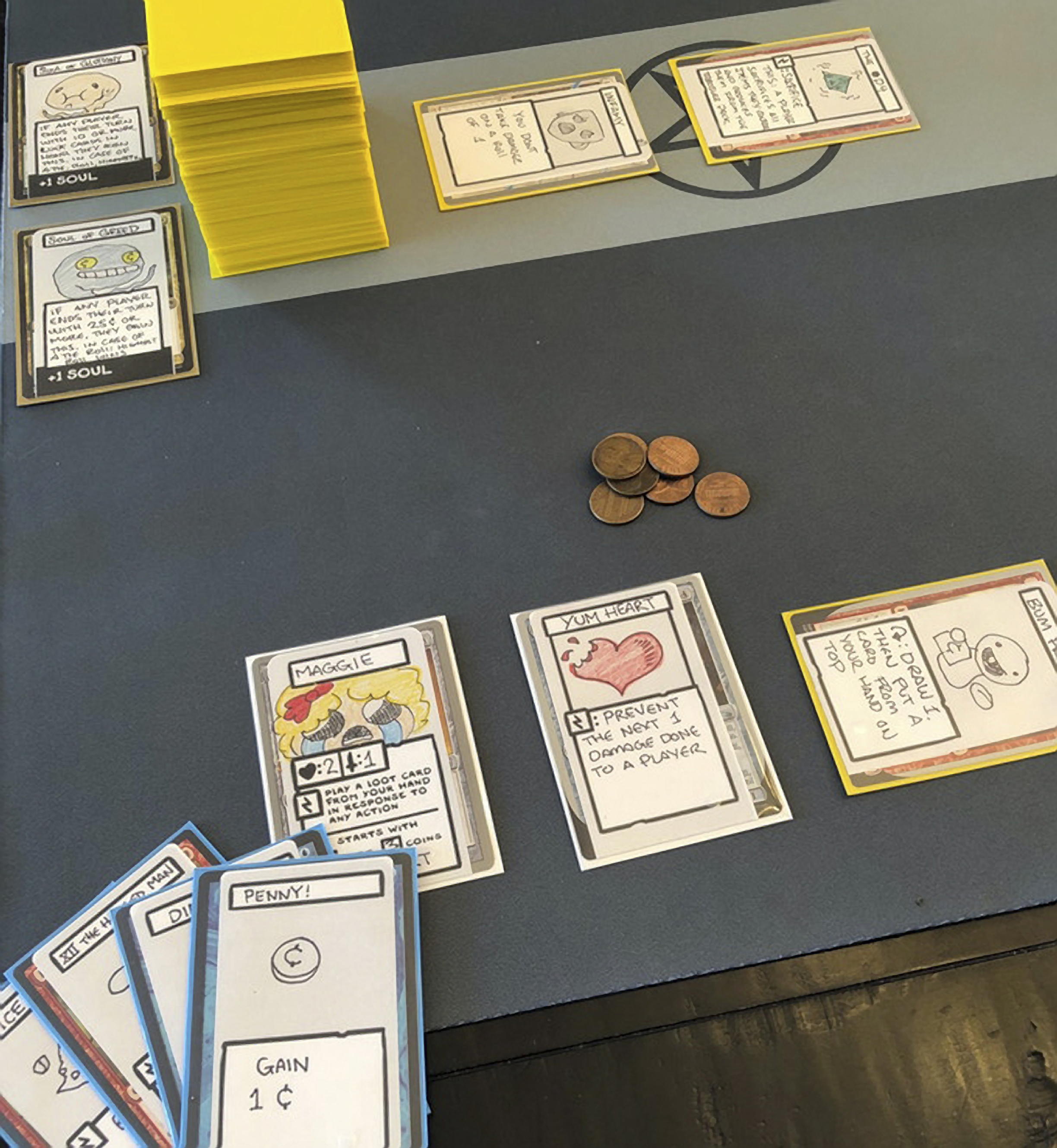 McMillen explains he’s followed his heart with Four Souls, “I am down with Ameritrash games. My argument against most of the hardcore Eurogames is that, in the end, they’re all chess. In the end the smartest person wins. In some aspects when you’re competitive it can be fun, but I like to play with a lot of varied ability people, and the dice roll brings them in, because there is a chance.”

“I wanted to focus more on random elements – and bring something else in entirely. I wanted to do a riff on Magic: The Gathering Commander or Wizard’s Tower,” says McMillen, referencing a version of Magic: The Gathering where a single huge deck, library and graveyard are shared between all players – with a small drafting pool to choose from too. It’s a bonkers set up, but undeniably fun for its weirdness.

But how to bring a game like this to life? Frazier gives us his perspective. 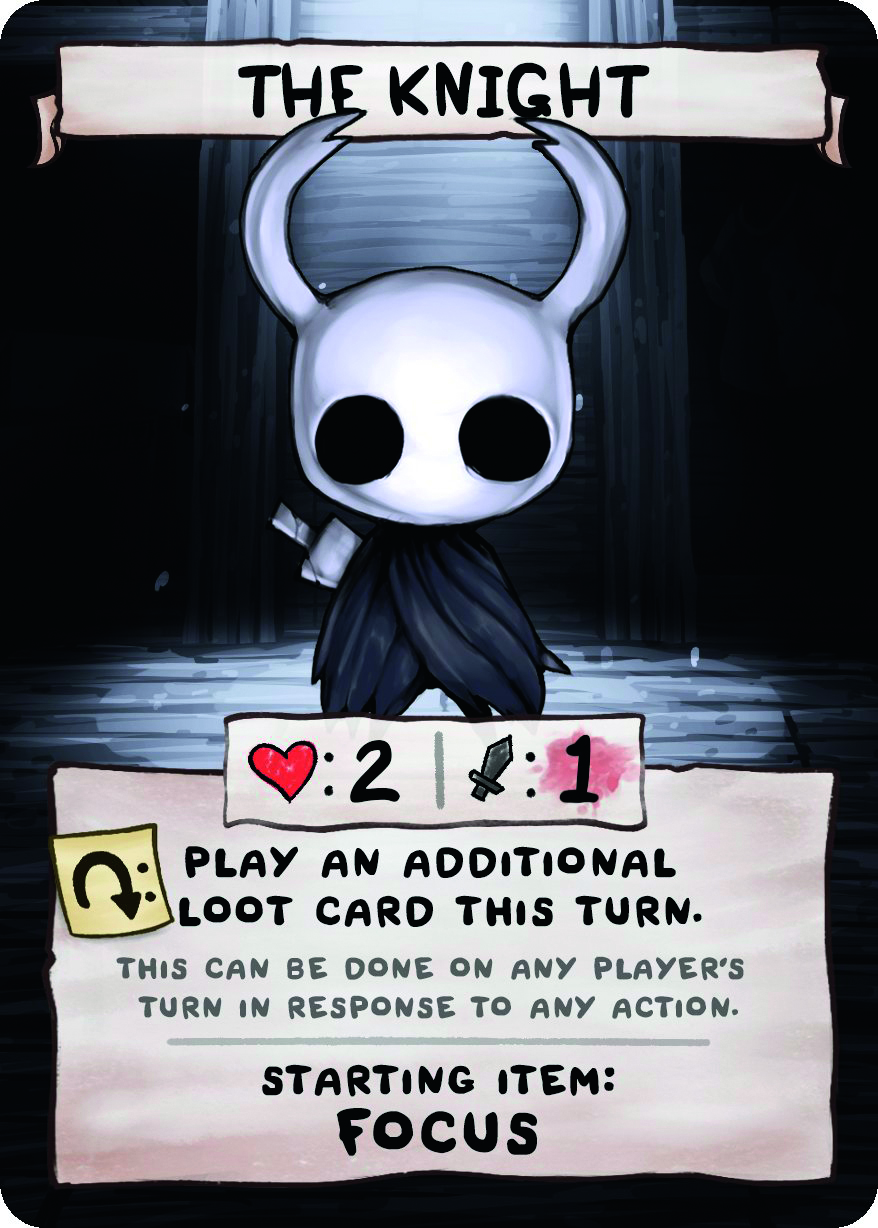 “His fanbase is amazing. They helped us out a lot. It was such an ambitious schedule, and there’s 400 or so cards, and we realised we wouldn’t be able to edit all of them. So we put up a ‘spoiler site’ and the fans helped to edit the cards so we could deliver the game in time. It’s a testament to the community,” he says, “we were building the game with them. Which is what we’re trying to do here again with Requiem.”

This community-backed approach is something you can only really do with something with an already loyal fanbase – and leveraging that is important to make sure games undergoing this translation process is key.

“I love the game, and always wanted to add a co-op system to it, which we’ve now done with Requiem,” says Frazier.

Requiem is the newest, biggest expansion for Foul Souls, and has the air of a remaster about it – everything here has been polished up.

Interaction is central to Requiem, which is further leant into by McMillen’s design. For example, some events after killing monsters will encourage you to give cards to other people, interrupt other play’s turns, and so on. This is encourages the interaction which is focused on betrayal. Requiem grossed over $6m on Kickstarter in November 2021 and came with add-ons and merchandising that is largely unseen for most board game Kickstarters.

Frazier tells a story about his time at Marvel, that illustrates how he knew The Binding of Isaac could rely on its fans.

“I have to tell this story carefully,” he says laughing, “but in a retail meeting before the first Iron Man film launched people were calling it ‘i-ron’ man and asking if he was a robot.”

“Hindsight being 20-20, we all see that Ironman is a big property and the central point of the Marvel Cinematic Universe – but at the time Hulk was the more popular property. Everyone knew Hulk because of the previous TV series, and Ironman was just tagging along.”

“We were pitching Ironman to retailers, and a lot of retailers were saying ‘i-ron man’. There was not a big confidence level in that property, they didn’t get it, they didn’t get the character. Obviously that changed very quickly as that became the biggest film of the summer,” says Frazier.

We ask Frazier as to how he knew he was right. He laughs, but we talk about how there was clearly a community behind both The Binding of Isaac and Ironman, but not one that would naturally inspire confidence in a new market.

“Retailers were literally calling Marvel Studio the B-team, because if you look at the history the other properties weren’t there. What’s really happened is that through the amazing stewardship of the Marvel leadership that these characters no one could imagine being million dollar movies would be central to the Marvel universe came to be.” 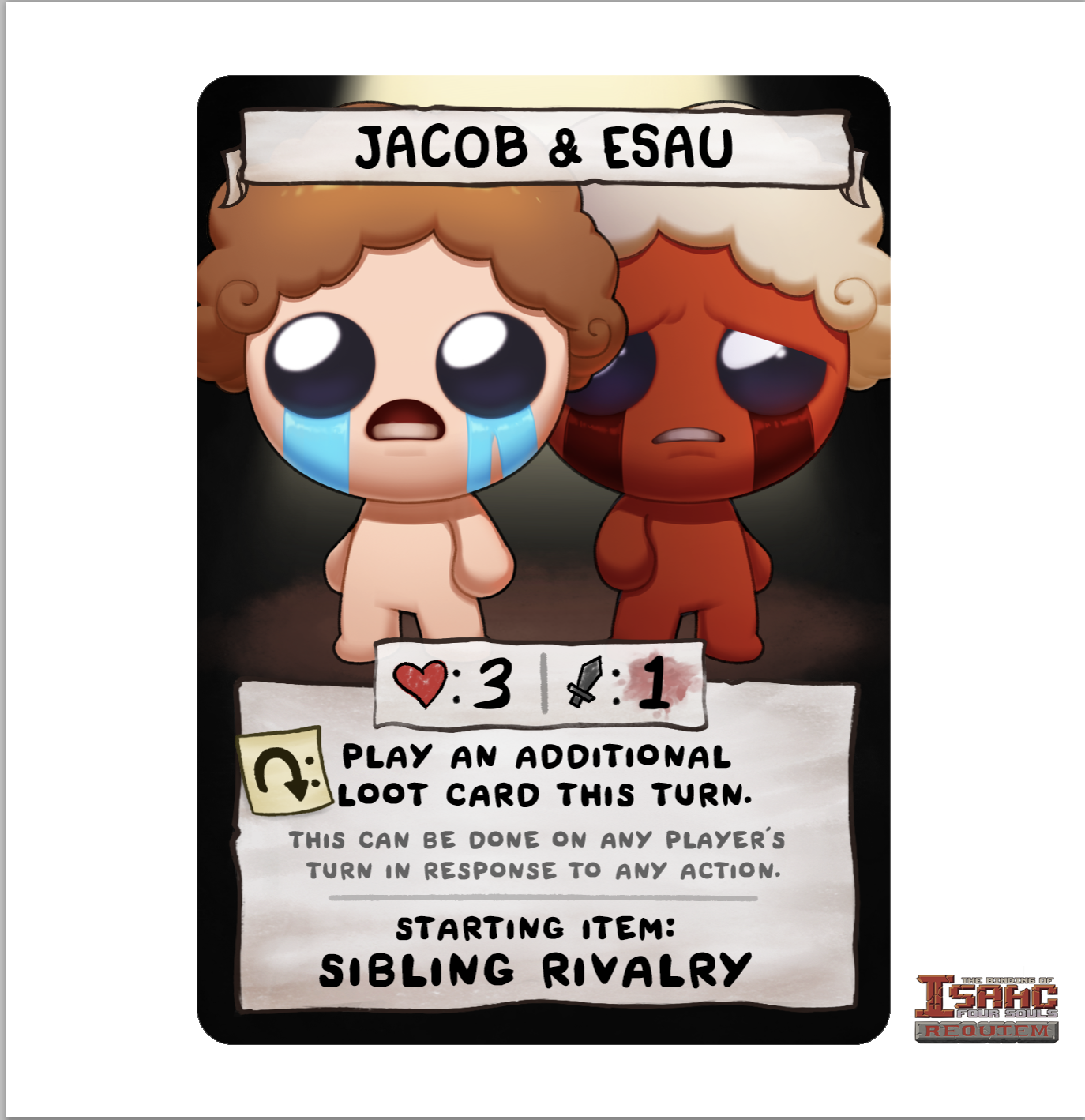 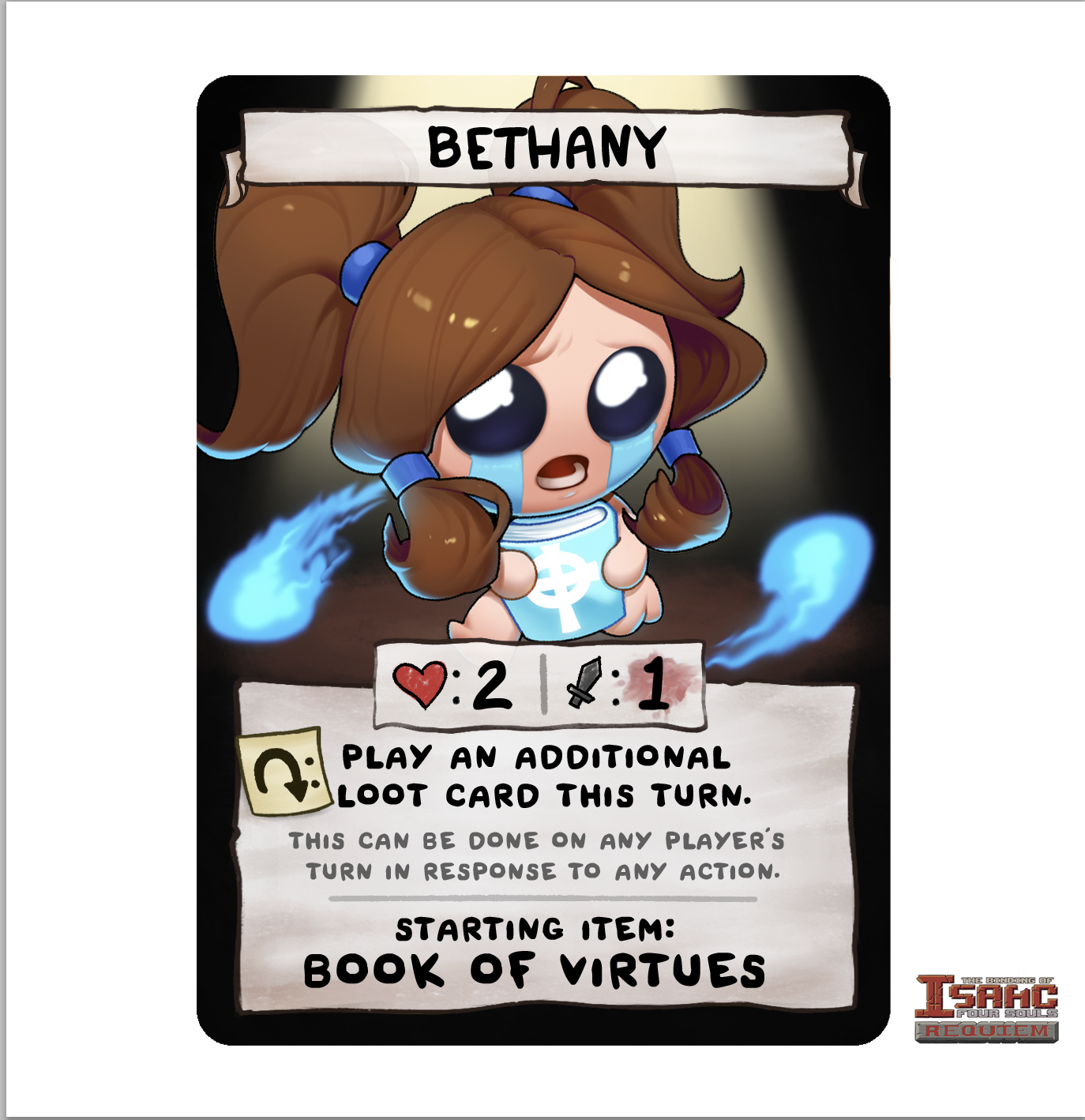 “You’ve got Binding of Isaac with an amazing fanbase, and even for our first Kickstarter people were very ‘oh okay’ – before it did $2.6m,” he says, the second Kickstarter hit $6.7m, “it was the 17th or 18th biggest Kickstarter on the whole platform. People did not believe it could be that successful.”

When asked about pitching games more generally, Frazier offers the following advice: “‘Is it tested? Is there an audience?’” he says, “everyone thinks their baby is amazing, right? And I think what I’ve seen, especially with Edmund, is about opening it up to the community and getting the feedback.

“For Isaac we have 30 or 40 extra things that has all come from the audience. The great thing about Edmund is that he’s so open to feedback” he says before offering another question, “are people fans of what you’re making?’ – you don’t have to have an audience the size of ours, but who have you shown it to and what feedback have you got?”

McMillen offers a few tips for people moving across from digital to tabletop.

“The reason I got into independent games and didn’t work in the mainstream at all is be – how would I ever convince somebody that my stupid idea would work?” he says laughing, “there’s no way! And even when I had Xbox and Nintendo deals they still told me my ideas sucked, and they wouldn’t sell well!”

On staying indie, McMillen offers the advice that he gives on college campuses “if you’re not already creating stuff, you should not go indie,” he says “because the only successful indies are those that are living the life. Secondly, understand that to amass a big enough fanbase takes maybe ten years of hard work and making as much stuff as possible. With each thing you make you’ll get better, and each thing you release will bring more people along with you – to the point that a large number of people will back you.”