When you first lift off the lid of Scythe, it can be a simultaneously exciting and daunting experience. There are hundreds of different tokens and cards, multiple rulebooks, and game boards that will fill most reasonably-sized dining room tables. (The main map can actually be extended further using a separate extension piece attached to its reverse.) You might look at the side of the box, re-read its promised playtime of under two hours and simply question: ‘How?’

It’s in Scythe’s ability to weave together highly complex strategy mechanics with a world of beautiful inspiration – without resulting in a board game that feels bogged down, overladen and drawn-out – that Jamey Stegmaier’s perfected design shines. Make no mistake, this isn’t just one of the best tabletop releases in years; it may very well be one of the greatest games ever made.

Players control factions in a fictionalised 1920s Eastern Europe, all competing to control the land around a mysterious building known only as the Factory. Each group’s leader consists of a human paired with an animal, be it a wolf, bear, eagle or muskox. (As a rare occurrence in the world of games, there are actually more female characters than male, all presented with panache and dignity.) The miniatures are sculpted effectively – if not exquisitely, a minor misgiving considering the sheer mass of components included – complementing the accompanying faction mats illustrated with the absolutely beautiful artwork of Jakub Rozalski, whose series of alt-history prints served as the initial inspiration for the game.

Each player’s faction mat is paired with a randomly selected player mat (they vary very slightly in layout) that serves as the pistons driving the engine. The mat consists of four sections split into top- and bottom-row actions, which are executed in order during a turn – for example, producing resources followed by deploying a mech. Only the actions in one section can be performed in a single turn, and (with the exception of one faction’s special ability) players must move their action token to a different section next time around, encouraging a healthy diversity of moves throughout the game.

This variety is matched in the objectives required to earn stars – earn six and the game ends, with the most coins (earned by collecting stars, among other actions) winning. Players nab stars for completing upgrades, deploying all of their mechs, buildings, workers and recruits, hitting milestones in the power and popularity tracks and completing specific objects selected at the beginning of the game. As a nice touch, winning in combat only earns a maximum of two stars (potentially more for one of the factions), meaning that out-and-out aggression is often not as prosperous as more tactical approaches.

When players do enter into combat with another mech or character – moving onto a hex with worker meeples simply makes them flee, at the cost of your popularity – battles are quick but highly strategic. Players secretly expend up to seven power using a dial and choose whether to boost the total with one of their combat cards – the highest number wins. The simultaneous reveal is an ingenious way of making battles tense while relying on strategy (how much power to spend versus the available power of your opponent) rather than luck, with the value of power and popularity in earning both stars and game-winning coins making peace often preferable to conflict.

Your character can also choose to engage with encounters dotted around the map, which offer multiple-choice events akin to a light RPG, complete with well-written flavor text and more of Rozalski’s striking imagery. These lead to the potential acquisition or loss of various resources but, more importantly, round out Scythe’s in-game universe and offer a more micro-level human edge to the otherwise zoomed-out strategy of the rest of the game. Meanwhile, reaching the Factory in the centre of the board offers the choice of a fifth section to your player mat and new abilities – although there are enough cards for all players, it’s first come first served, making an early dash advantageous.

Producing resources is key to progressing in the game, with worker meeples (and the mill, when built) producing one of four key goods – wood, metal, oil and food – dependent on the hex they control. The goods are used to purchase upgrades, which improve the future production of goods and the beneficial side effects of particular actions; mechs and buildings, which offer their own unique boons as more are built (you must build at least one mech for your character to be able to cross the rivers that isolate you at the beginning of the game); and to enlist recruits, which offer small rewards when the players located either side of you perform specific actions. Purchasing upgrades and the like also rewards a player with coins, which primarily serve as a form of victory point rather than an economy.

The player mats are cleverly designed, revealing the permanent benefits offered by each structure, mech, recruit or upgrade as their tokens are moved onto the main game board or faction mat. While there are many aspects of the game and its various facets to grasp, the components themselves go a long way to easing even Eurogame newcomers into the smooth flow of the game’s strategy – one of our group expressed concern over the title's depth during setup, but by the end of the first match had clicked with the core mechanics
and overtaken several more experienced players.

It takes a little time to set up (though it’s still relatively quick compared to many of its heavy strategy peers) but once Scythe is rolling, it doesn’t slow until a player hits six stars – when it immediately stops. The momentum is helped by a lack of defined rounds and the division of top- and bottom-row actions into those that may affect other players and those that only affect the current player – this means that the following player can essentially start their turn while the previous player performs the second half of their actions, eliminating a lot of downtime and propelling the match along. The sudden end stops the game trundling off into tedium, while the fact that earning six stars doesn’t necessarily instantly win you the game maintains some tension and excitement right until the final coin has been counted – as well as opening the game’s numerous elements up for players to tackle with their own equally successful approaches.

Scythe is a rare creation, striking the perfect balance between depth and accessibility, style and substance, and fun and challenge. It’s a remarkable piece of work that requires relatively little investment of time or effort to get a lot out of, and serves as an example of how to distil the very best that tabletop gaming has to offer into a package that almost anyone can understand and enjoy.

A triumph of the tabletop medium, Scythe is at once deep without being labourious, stylish and fun without being vacuous, and complex without being inaccessible. Jakub Rozalski’s world is confidently built with heaps of atmosphere, while Jamey Stegmaier’s watertight design is polished to the sheen of a mech’s cockpit. It’s not only one of the best games of the last few years – it’s one of the finest tabletop creations in decades. 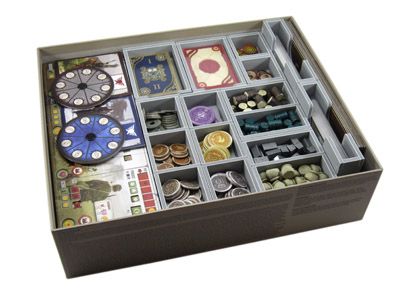 Compatible with Scythe®, and the Invaders from Afar® expansion. Can be used in the Legendary Box in combination with FS-SCY+ insert for the Fenris® expansion box.