This chaotic real-time dash is bursting with clever ideas

Magic Maze is the most hectic, wild, out of control party game you could play in a library or at the back of church.

It’s a real-time co-operative dash with a hilarious and unique theme: four hapless fantasy adventurers have decided to rob the local shopping centre (it’s called Magic Maze, in case you’re wondering about the name) to resupply after losing all of their possessions.

Pulling off the heist is less of a fully planned-out scheme and more of a Supermarket Sweep-style sprint through the shops and corridors so that the barbarian, mage, elf and dwarf can grab their items and leave as quickly as possible. That’s not to say there’s no co-ordination. Actually, you’ll need plenty, as each human player is randomly dealt a tile that dictates the one or two actions they make with the four heroes. (Play with fewer than four people and you’ll get multiple tiles each, while over four means players’ abilities double up – four is the sweet spot.) This means one person might be able to move the pawns left, but that’s all they can do. Another can go right or use escalators, but that’s it. And so on.

It would be amusing enough to try and guide the robbers around the randomly-generated mall tiles with this caveat if you could chat out loud and work together – but you can’t. No player is allowed to speak (or shout, as the case may be), meaning pointed stares and the use of the big red ‘do something’ pawn are all you have to communicate your plans to your accomplices. Thus, chaos ensues, as players send the heroes careening around the tiles as the sand timer ticks down.

Oh, did we not mention that you only have three minutes to get the goods and get out? Luckily, the sand timer can be turned by landing on one of the marked single-use spaces around the mall, but it simply flips it as it is at that exact moment – meaning timing the flips carefully is the only way to maximise the amount of time you have to complete each mission. (You do also get to talk until someone touches the board again – but the time goes down regardless.) 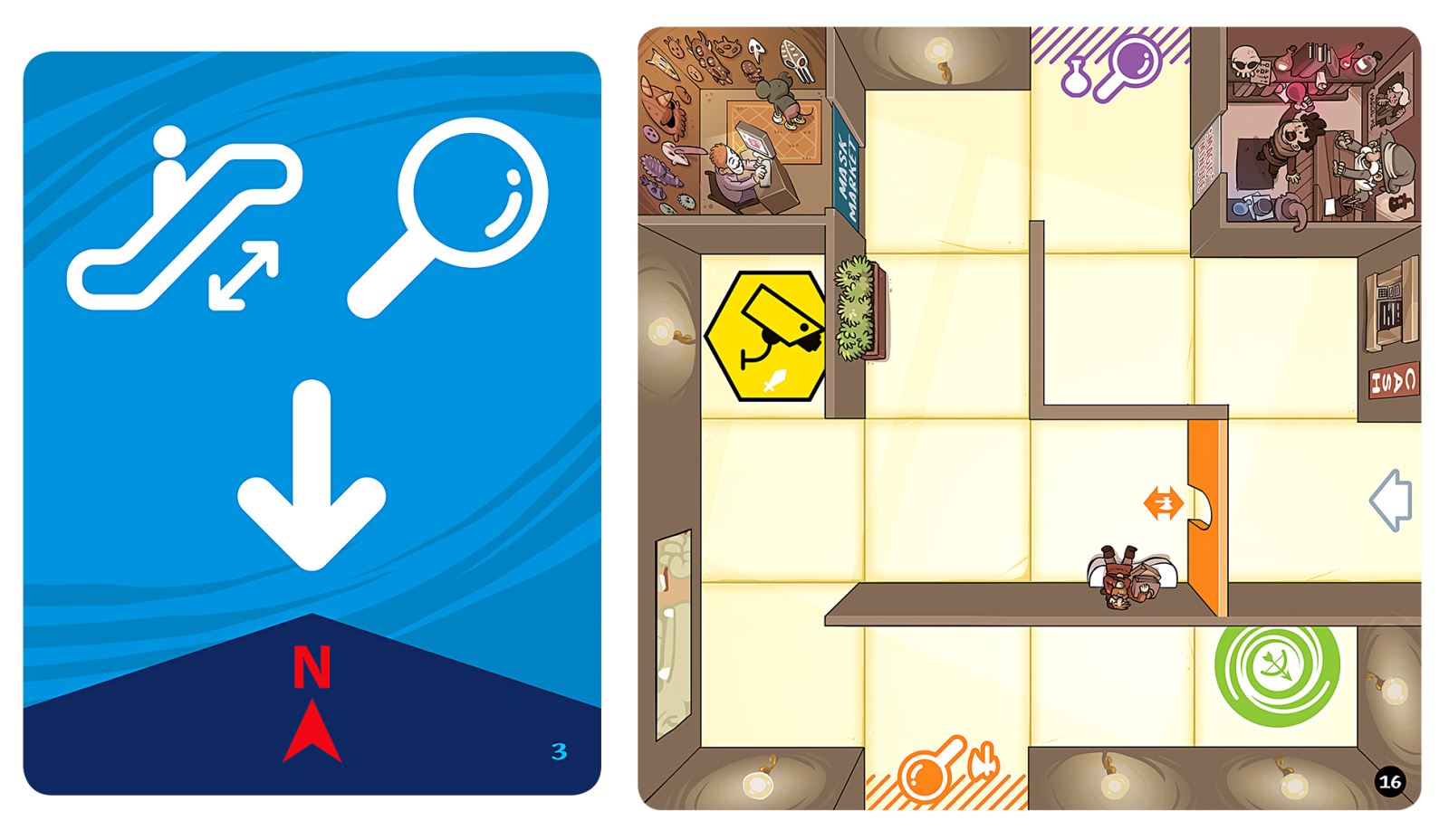 It all adds up to a frenzied mess of tangled arms moving pawns and frustrated heads-in-hands that plays out in complete silence, almost like a Chaplin or Keaton comedy translated to the tabletop. Yes, the lack of talking can be maddening as the last few grains of sand flow through and the person responsible sits clueless as you bang the pawn in front of them, yet the ultra-fast play time (15 minutes at the very most, but often under 10) encourages repeat plays rather than angrily scattered components.

There’s a surprising amount of depth going on in the game, which ramps up from teaching the fundamentals of movement and the use of teleportation vortexes (which shut down once the items have been stolen) to class-specific abilities, including the need to knock out security cameras, over a series of gently intensifying scenarios in the manual, which smartly add extra tiles into the mix with each subsequent lesson. These are followed by ten nicely varied scenarios, each with a unique gameplay challenge, which can also be adjusted in difficulty by adjusting the number of map tiles used – your winning time for each can be recorded on the included score sheet.

Although the box design and tile backs are hardly exciting, the actual illustrations of the mall pop with cutesy cartoons and hidden jokes. One lovely touch is the inclusion of stickers to help those with colour blindness or other visual difficulties distinguish between the hero pawns – and the game’s insistence on silent communication would also suit those who are hard of hearing, making it a wonderfully accessible experience.

Don’t let the naff name put you off – Magic Maze is quite unlike many other games out there. It’s a frantic, delightful race with a whole lot of heart – and plenty of brains, too.

Magic Maze’s lacklustre box and title don’t do justice to the hilarious, bonkers game inside. The divided movement responsibilities keep the tension running high as time ticks down, while the ban on talking results in a uniquely exciting and amusing co-op experience. The accessibility considerations are also a big plus.