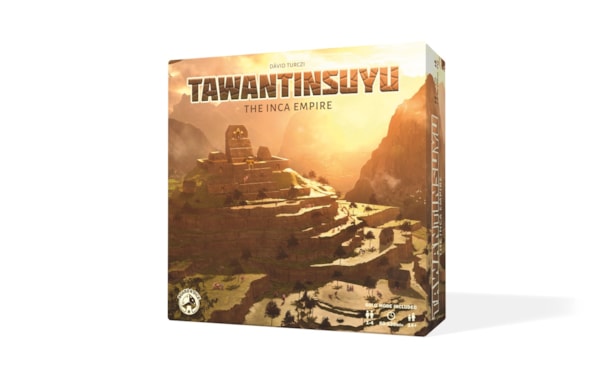 The sum of its parts?

Tawantinsuyu was the name given to the Inca empire by its inhabitants. Literally translated as “four parts together” it was a sprawling civilisation stretching along the western edge of South America until it was brutally crushed by European colonisers. Its sheer scale is difficult to comprehend, which makes it appropriate that Tawantinsuyu: The Inca Empire is a big, complex, clunking beast of a game.

It’s hard not to feel intimidated the first time you set it up. It comes with the standard heavy-Euro collection of chips, tiles, pawns and tokens as well as a 28-page rulebook. Then there’s the board itself–a space-hogging thing covered in strange symbols that seems like it might take several years of study to fully decipher. If you’re anything like me, you’ll take the easy option and watch a YouTube tutorial instead, referring back to the rules and player reference sheets to clear up uncertain points in play.

Once the learning process is out of the way, Tawantinsuyu turns out to be a reasonably flowing experience. It casts you and your friends as rival Inca nobles vying to lead your people. To pull it off, you’ll need to deploy workers to different parts of the pentagon-shaped temple in the centre of the board. It’s a complicated process involving discarding cards representing your devotion to a pantheon of gods, paying varying amounts of food to access far-flung spaces, placing your High Priest in advantageous spots and cleverly positioning your meeples to gain bonus actions wherever possible.

It isn’t for the faint-of-heart, and it’s only the foundation of the game. There are also different types of workers–architects, craftspeople, warriors, couriers and priests–all of whom offer different advantages when you deploy them to the board. There’s an element of route-building where you can place staircases to gain cheaper access to different parts of the board. There’s a very abstracted military system which forces you to choose between amassing army cards to conquer new lands, or discarding them to gain useful extra resources: a neat representation of the rewards and costs of militarism. And there are buildings which grant you an array of special abilities to exploit.

It’s a deep, multifaceted game which throws up head-scratching dilemmas at every turn, although it’s somewhat let down by its presentation. In the past few years we’ve seen games like Teotihuacan: City of Gods with its mah-jong-like tiles, or Tekhenu: Obelisk of the Sun with its striking three-dimensional monument. Both sit alongside Tawantinsuyu on the meatier side of the complexity spectrum, and both have considerably more table presence. And if you’re after a similarly challenging worker-placement game, 2019’s Terramara is another appealing option.

There’s also the ever-more-pertinent question of how games based on real-world cultures reflect the people and places which inspire them. Tawantinsuyu clearly comes from a place of respect, but beyond a few paragraphs of introductory text, there isn’t a huge amount to convey an impression of time, place or context. The result is a heavy, absorbing game that never completely gels with its theme.

Try this if you like: Teotihuacan: City of Gods

It’s another mind melting game with its own distinct spin on worker placement, set against the backdrop of an ancient Mesoamerican culture.