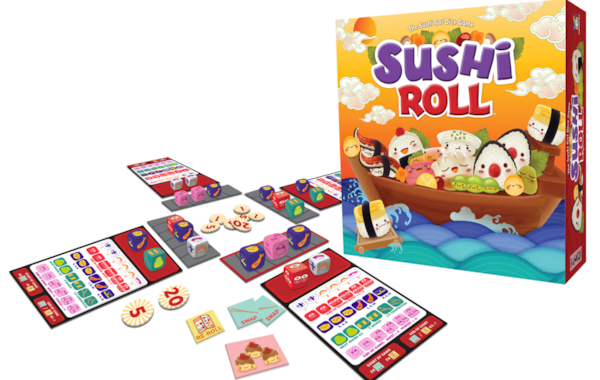 Buy your copy of Sushi Roll from us here.

Sushi Roll has a killer name. It also has a killer premise: take the quick, clever and delightfully cutesy card-drafting of Sushi Go! and swap the cards for dice. Simple – and potentially as boring as plain white rice. Fortunately, Sushi Roll does enough that’s different to offer a satisfying side dish to its delicious predecessor and, despite a couple of small splutters, still goes down a treat.

The pick-and-pass heart of Sushi Go!’s hands of point-producing nigiri, sashimi and maki combinations remains reliably familiar. This time, it’s a single die that you get to keep, with similar scoring conditions (sets, multipliers, having the most) for each course’s platter of dishes, plus a final burst of points for scoffing the most pudding over the entire three rounds. On the whole, it’s not massively different from Sushi Go!’s pleasingly straightforward points buffet – and with good reason, given how fast and fun designer Phil Walker-Harding made it to begin with.

The colourful dice look predictably fantastic, fetchingly engraved with the various foodstuffs they offer. (Each player’s menu handily summarises each die’s faces.) The bright design makes it easy to spot what another player has, allowing you to quickly scan the table and plan ahead as the conveyer belts of dice make their way around. As in Sushi Go!, the foody theme and its presentation – even if artist Nan Rangsima’s grinning cartoon nibbles aren’t showcased quite as prominently here – continues to be an unmitigated delight.

Chopsticks and menus (introduced in the expanded Sushi Go Party!) are the most notable departure from the card game, this time appearing as tokens that can be spent to give players the chance to re-roll any number of dice – a welcome bit of control over your odds – or swap a die with another player. The die-swapping chopsticks make for a more direct bit of interaction between players, and further help to deal with the chance of rolling rubbish. It’s a small but notable shift from Sushi Go!’s limitation to passive-aggressive picking that neatly throws up different decisions and strategies, and gives Sushi Roll an individual flavour.

The downside is that allowing for fair player-on-player powers requires Sushi Roll to drop the snappy simultaneous turns of Sushi Go!, replaced by a slower one-at-a-time use of tokens and die selection by each player. Each new round also requires all players to re-roll their pool of dice after (sometimes a little awkwardly, depending on your table) sliding their cube-loaded conveyer belt to their neighbour. It’s not enough to cause the game to choke but, especially in comparison to Sushi Go!’s rapid-fire passing of cards, these moments can feel like splutters.

Looking at Sushi Roll’s box, you might be surprised at the contents. Despite being significantly larger than the hardy metal tins of the previous games, the box feels far more empty. The selection of dishes has been stripped back from Sushi Go Party!’s mix-and-match menu; a random handful of dice are pulled from a bag for each new round, but there’s no official way to tailor the play style to your choosing. With Sushi Go! a top-tier travel-friendly game and Party! serving up plenty of personalisation and replayability in a still-compact package, Sushi Roll’s superfluous size and inflexibility feels like an unnecessary step backwards.

The gameplay of Sushi Roll isn’t quite as perfectly formed as its name. If you don’t already own Sushi Go Party!, that remains the better overall experience unless you’re absolutely craving some dice action. That said, if you’ve had a blast with Sushi Go! in the past and want something fresh, or are looking for a decent dice game that looks great and plays easily, Sushi Roll is still worth ordering.

Even with a couple of small sticking points, Sushi Roll is enough fun – both familiar and fresh – to make it a worthwhile addition to Phil Walker-Harding’s Sushi-verse.

Buy your copy of Sushi Roll from us here.