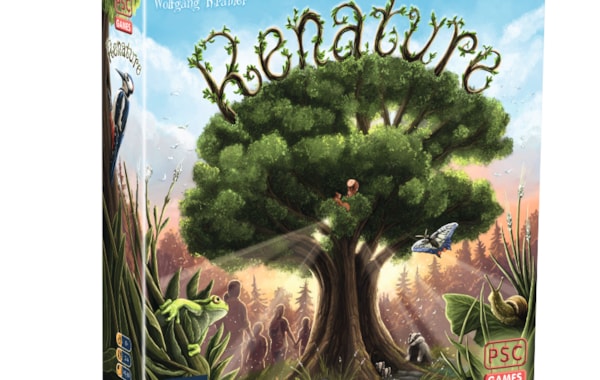 It seems to be a trend in game design at the moment to make an experience that seems to belong to a different time. Renature, by the multiple-time Spiele des Jahres winners Michael Kiesling and Wolfgang Kramer, feels like it’s slipped onto our gaming table from the mid-00s. And that’s no bad thing.

There is an overgrowth of wooden pieces in the box, from the dominoes which depict various woodland animals, the tree, shrub and grass plant markers to the slim cut turn markers. The production levels are enjoyable for their lushness from the start – including one of our favourite design flourishes of recent years – neutral items simply display the natural grain of the wood.

Players take their boards and populate all the plant spaces with plants of their colour and fill the rest with neutral flora. They then get dealt their pile of face down dominoes, of which three will form their hand. The board is divided into areas on which plants can grow and areas around these where animal dominoes can be placed. Placing a domino (using exactly the matching rules you expect) gives players the option to pop a tree into an adjacent plot and score points. Naturally a pine is worth more than a shrub, and a shrub is worth more than grass. Scoring when placing plants counts the points for the piece placed, plus a point for every ‘lesser’ plant in the area, making it advantageous to build up the greenery in that particular woodland postal district. 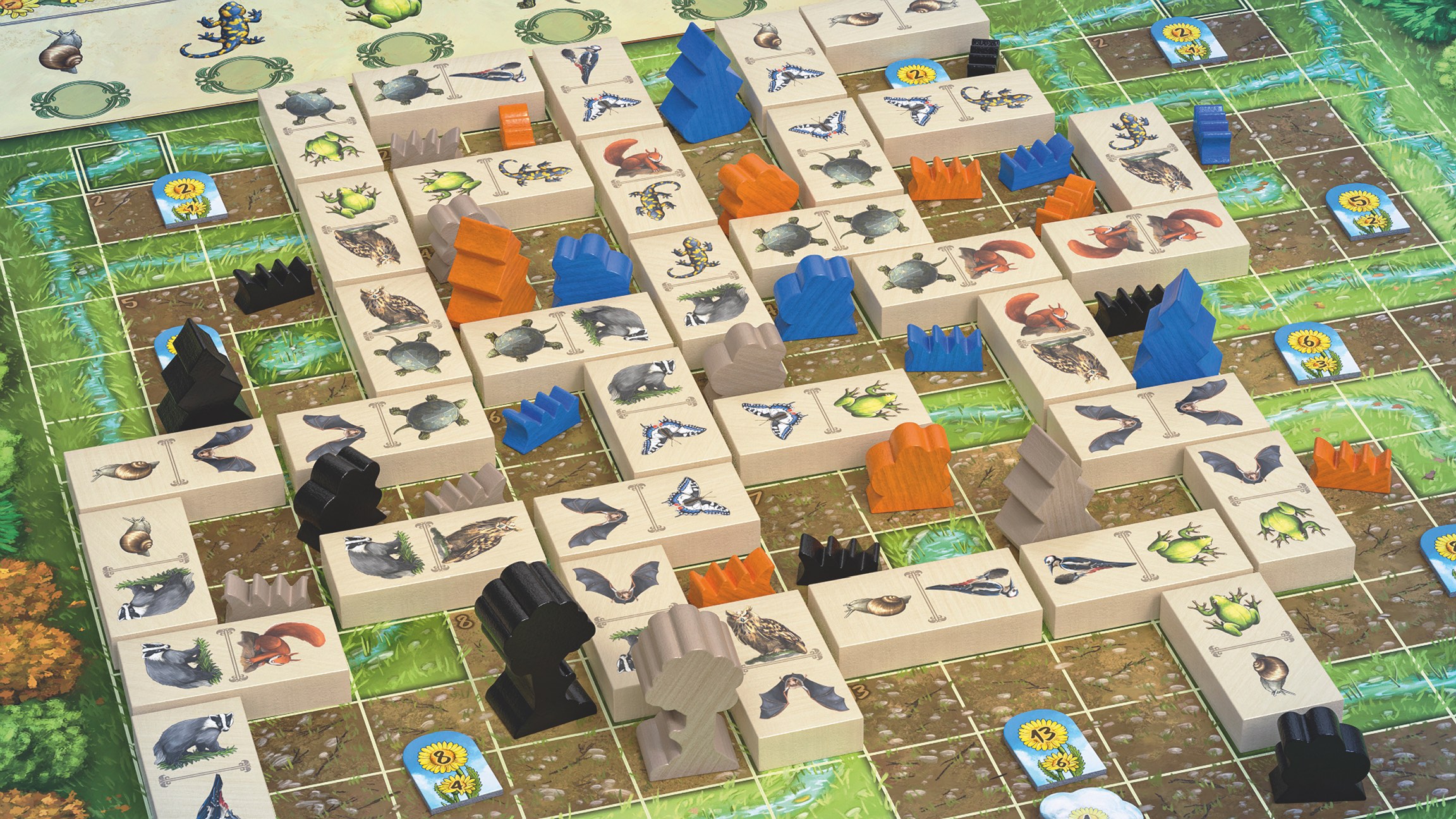 Things get a bit more tooth and claw when players start sectioning off the forest. Once an area is surrounded by animals, or it’s impossible to add an adjacent tile, area scoring kicks off. The most dominant player in points value collects the top victory point prize for that area, and the runner up the second, if neutral wins, no one gets anything. The player who triggered the area scoring takes the VP tile for end of game points.

Renature is reminiscent of Carcassonne in the sense that you’ll be making judgements about how much to commit to a shared forestry project. You might abandon an ambitious project as you just can’t see it being finished, muscle in a majority by a single point on a lucrative area at the last moment, or curse yourself for using neutral plants in a particular area when it comes to counting dominance.

Cloud tokens allow for fairly dramatic actions, like taking back a plant piece, or even ‘having another go’. These are also used to change the ‘joker animal’ (not a hyena, and a name chosen because writing ‘wild animal’ repeatedly might be confusing we assume) which means any animal can be domino-paired with it. This little veneer of management mechanics offers exciting and disruptive turns on top of what is a tightrope walk through tough choices in charming Wind and the Willows or Farthing Wood clothing.

It’s a game that feels old in a good way. Its simplicity, with the additional mechanical flourishes, demands replays immediately, and woodland grudges crop up quicker than weeds amongst the roots after rainfall. A clear triumph for those in need of a light game that they can come back to again and again. 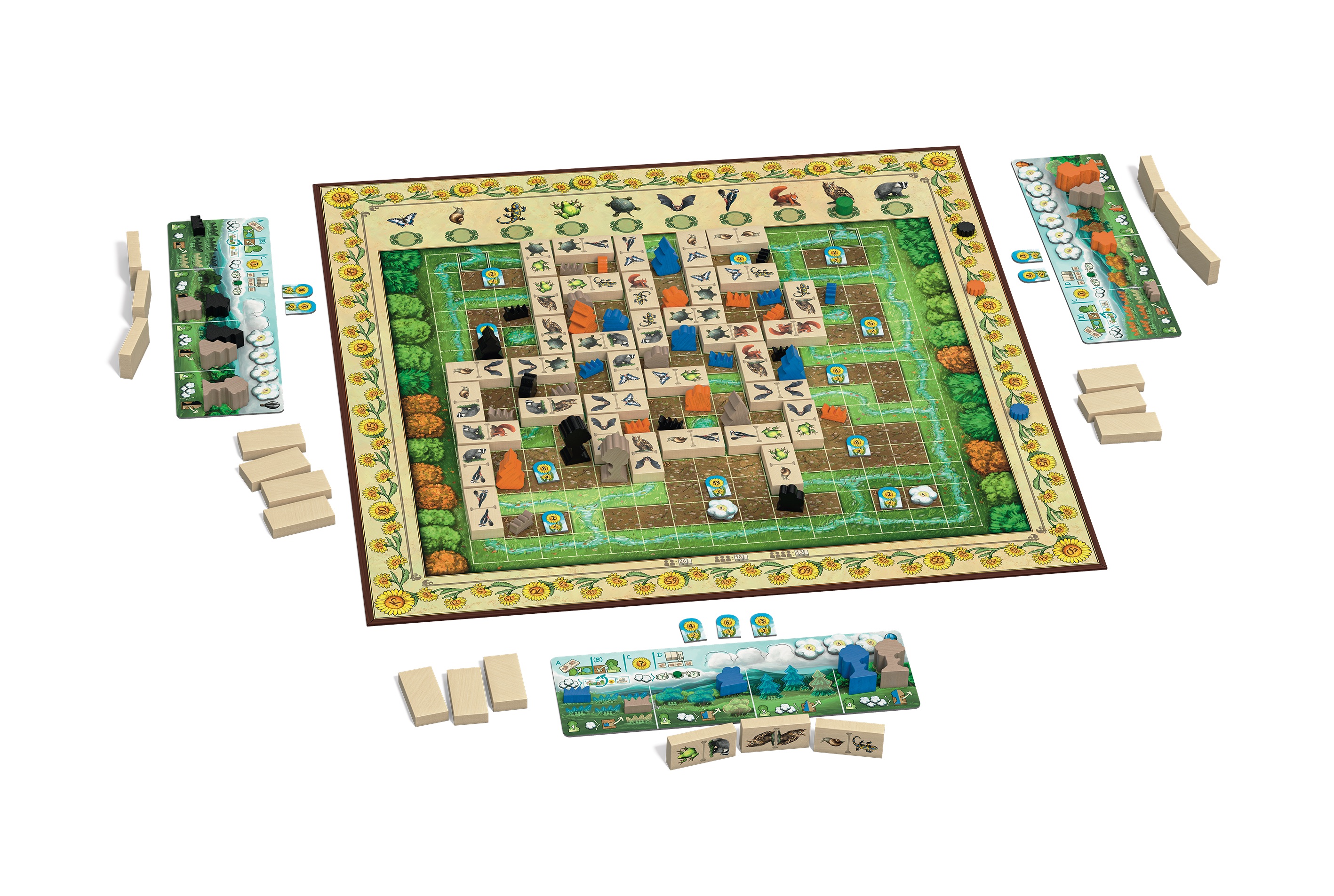 The tactile feeling of the game makes it directly gratifying to play and its mechanical connection of games of the past imbues it with accessibility as well as an immediate sense of competition.

TRY THIS IF YOU LIKED Miyabi…Michael Kiesling’s garden-tile stacking game may play more like a spreadsheet, but it has the root point-collecting fun of Renature