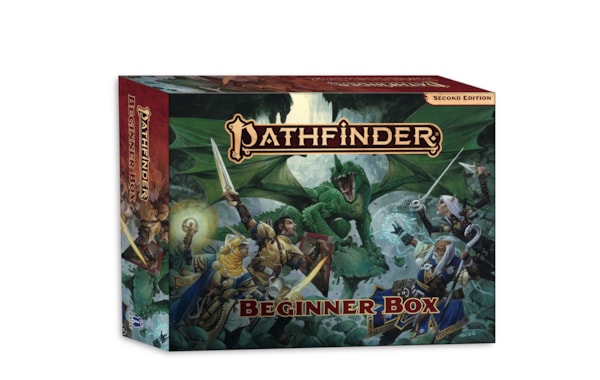 A wonderful way to get on board

It says a lot about Pathfinder that its pared-down, rules-light beginners’ box probably has more complexity and content than a lot of full RPG releases. It probably says even more that, as a tool for getting new players on board with the game’s action-packed fantasy adventures, it’s a roaring success.

The boxed set is built to give a gaming group everything they need to get a game going, ranging from a set of fancy dice – colour-coded to give you a chance of distinguishing the d8 from the d10 – through to pre-generated characters. Where many other kits pride themselves on being about as minimalist as they can be, the Pathfinder team have gleefully leant in to all the props and tools that make their game stand out.

This means that alongside the traditional rule booklets and intro adventure, you get a decently sized map and an absolute pile of cardboard tokens to play around with. If nothing else, these do a wonderful job of adding a bit of extra value to the package and are something you can keep using once you’ve left the realm of beginner boxes far behind you.

Of course, the juice of any RPG product lies not in the accessories but in the game itself. Here, Pathfinder does pretty much exactly what it sets out to do by providing fantasy adventures that crack up the complexity and customisability when compared to the other big players on the market.

The sheer size of even the bare-bones rulebooks that come in the set – which come in at about 170 pages if you stick them together - can be a shade intimidating. However, while there is doubtlessly a lot of complicated stuff going on during a game, the introductory adventure that comes packaged with them does a surprisingly solid job of ramping you and your players up into the more fiddly aspects of the game.

If the idea of Pathfinder’s depth has always been tempting, but the hurdle of reading through the concrete slab of a core rulebook keeps you from taking the plunge, the Beginner Box is a wonderful way to get on board.