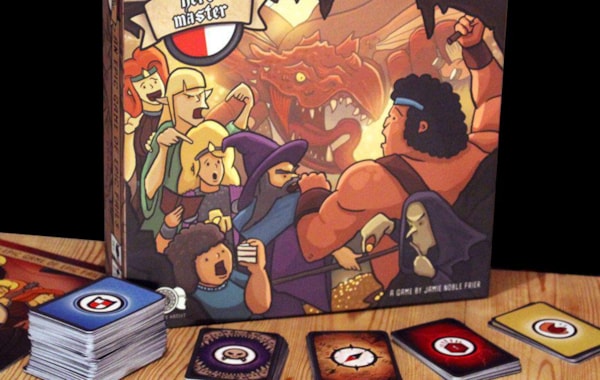 Not all adventurers are created equal

With art and game design by Jamie Noble-Frier, Hero Master: An Epic Game of Epic Fails is a one man labour of love. Through witty illustrations and crafty take-that card play, Hero Master tells the tale of an unfortunate team of misfit adventurers working together through a series of perilous encounters to finally confront Crackletooth, the legendary dragon. But this is no cooperative game. Each hapless hero also intends on escaping the dungeon with the most gold and a greater chance of joining a ‘real’ party, and will do so at any cost.

All of this plays out through the use of cards, a pair of D20s and a lighthearted sense of humour. At the start of the game players will be dealt a random race and class card before receiving the related attack decks and combining them. Each class also starts out with a pair of weapons and a set of armour which are placed on their lovely neoprene player boards. After determining the first location and laying out the enemies and other components, the party leader will choose an enemy for the part to encounter.

Each player decides whether to partake in the encounter by laying an attack card in the first attack slot on their player board. This same process occurs for the second and third attacks whilst also allowing players to now play ‘bungles’ on other players’ cards, weakening their attacks and increasing their chances of a critical fail. Heroes must first score a hit on a monster by rolling the green dice before choosing one of the monster’s four elemental defence values to match or beat with their attack cards and weapons. A black D20 represents your foe’s attack, with any result matching or beating your armour value resulting in damage and other nasty effects. Play continues until someone defeats the monster, winning gold and treasure, or until the monster – seemingly embarrassed by your efforts – buggers off.

There’s a generous amount of replay value here thanks to the, numerous location cards and enemies, randomised race and class combos and hoards of collectable and equip-able treasure. For players really wanting to make an evening of it, there are extra components included to test your heroes’ mettle in campaign mode.

Surprisingly, Hero Master’s fun, caricatured art belies a reasonable amount of tactical depth and brutal take-that elements. This is exaggerated at only two players, making your impending misfortunes that much more predictable, forcing you to prepare for retaliation. Presumably, higher player counts will spread out the hate resulting in quite a different game.

Then again, even without the input from your untrustworthy companions, Hero Master’s dice keep the game’s mean streak going. Although, in the context of the game’s theme and target audience, the reliance on dice-based luck for combat resolution is apt rather than unfortunate. In the midst of Hero Master’s ridiculous dungeons, it’s reassuringly familiar to grasp a couple of D20s with the hopes of tossing an elaborate critical success, knowing full well that they’re eventually going to bite you in the ass. Unfortunately this does mean that some players will lag behind simply due to bad luck, with the game’s catchup mechanic of powerful ‘protest’ cards often doing little to balance things out.

Even for those who seek a more serious tone from the art and themes in their games, it’s hard not to appreciate the absurd and colourful tableau Hero Master spreads across the table as more cards are played each turn. Whilst every unique card features its own illustration and humorous flavour text, the joy comes from imagining the plight of your adventurers through the clusters of cards on the player boards. Tie this together with fun but occasionally fiddly gameplay and you’ve got a solid card game with its own distinct feel.

Hero Master offers plenty of theme for those willing to engage, with plentiful farcical nods to the fantasy and roleplaying genre. Much like its characters, Hero Master does display some flaws, with some occasional fiddly moments affecting the game’s pace.

TRY THIS IF YOU LIKED: MUNCHKIN...

Hero Master displays its dungeon crawling and roleplaying theme in a more satisfying and involved manner than Steve Jackson’s divisive classic, whilst retaining a similar approach to eye-catching art and tongue-in-cheek tone.