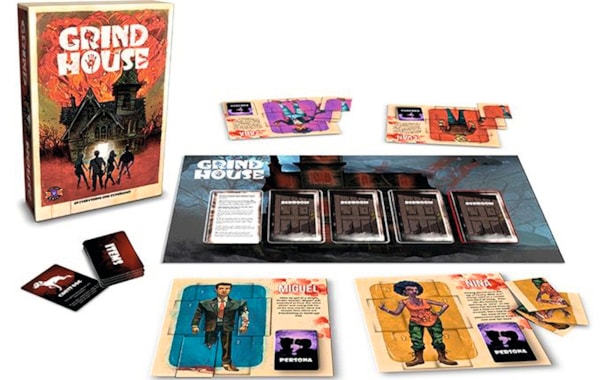 Social distancing from your own limbs

Grind house as a film aesthetic had its corpse jolted to life around 2007, when the Rodriguez-Tarantino double feature of Planet Terror and Deathproof were released in cinemas and played out at their full length, back to back. This was an attempt to recreate the classic murder-and-gorefests of the 70s from films like cult favourite, Basket Case. Generally, it’s a bit silly, people tend to get arms and legs lobbed off left right and centre, and continue to hobble around on stumps as if, indeed, it was just a scratch.

And this narrative dice game outing from Everything Epic Games does a great service to the scrungy spirit of these films. Partially because of its lightness, and partially because of the kind of choices those at the table will make.

A group of players will set out four room cards and ‘final room’ card on the playmat, select a character (all with amusing and appropriate backstories), take their limb-and-body damage tokens, a persona (like you’re a mutant, or a killer), take a blood-splattered dice, and the first player will turn the first card and read it.

As you’ve been invited by a cash-prize offering host, and your own desperation, you’re just trying to survive the night and get out a bit richer than you went in. Each room offers a choice for players – like deciding whether to cut off their own arm or someone else’s, or to pick a path through the room. The latter sees a dice roll and the players who picked the designated path on the roll might take a wound (adding a matching wound tile to their character sheet) or losing a leg (flipping the same tile to show the missing appendage). Some of these tests require ‘volunteers’, which is where the game starts to occupy a space between a very light RPG and party game. Players have to work out who is going on the chopping block, literally.

It has a lot of the same draws as something like Escape The Dark Castle, with more of a competitive element. You’re not all trying to survive, in fact, if someone dies (which they will, pretty early on) they get to haunt the other players with the special power on their persona card. Haunting is a mix of take that and cooperative play. For example the ‘mutant’ persona can ‘borrow’ body parts at the end of each room, before come back to life before the final room with that number of body parts left.

The two expansions we got our hands on, Krampus – a Christmas horror that comes in the core box, and Cthulhu and Carnival – more tentacles, obviously, sold separately, seem like decent ways to keep the deck topped up and keep life in the game longer with the odd additional gimmick (like an insanity track). With a game that relies on its writing so much, they’re probably worth picking up.

The writing is extremely good and entirely in the character of the films it is trying to emulate. If you’ve got a crowd of gamers who are more likely to laugh at badly done but grizzly special effects than to wince, this is a perfect evening. It does require a little bit of horror knowledge and enjoyment of schlocky tropes, meaning it’s not for everyone, but for those it is for, it’s an excellent addition to the lighter, if gizzard-splashed, side of your collection.

Rare for a game to be legitimately 15+ certified, but that’s what you get for embodying the spirit of grind house. A good natured game of incidental amputation that will thrive amongst those with a dramatic flair and a gaming group with the right cultural touch points.

TRY THIS IF YOU LIKED Escape the Dark Castle...

If Escape The Dark Castle doesn’t have quite enough explicit dismemberment for you then Grind House is worth going out on a limb for.