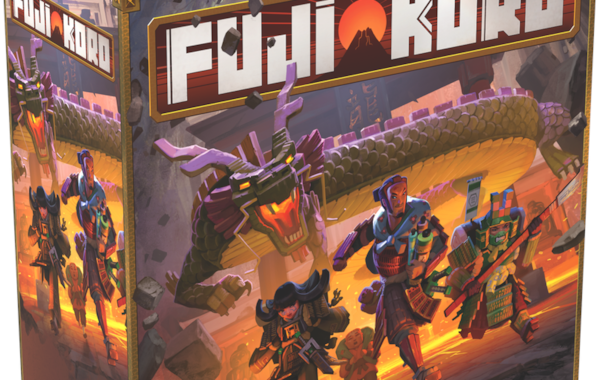 An eruption of components, a mountain of fun.

Fuji Koro tells a tale of shogun heroes escaping from the epicentre of the erupting volcano. They run from the centre of its crater, treading carefully on the shaky ground that threatens to crumble into molten lava with every step. As they rush to uncover that magical rope that will get them to safety, they will need to gather materials to craft their protective gear and infuse them with powerful spells. They will also encounter helpful monks and deadly dragons. Because, of course, there are dragons.

Fuji Koro doesn’t always make a lot of sense, but don’t let those lapses in logic detract from the bags of fun this game has to offer. The game is divided in two main parts. In exploration-like phase, players search the volcano, gather resources, fight and craft gear. As soon as one of them reaches 30 victory points, the eruption will commence, and players will need to try to escape before every stone under their feet turns into deadly lava.

The main source of victory points is, of course, defeating dragons. Players will need to craft their gear made up of resource cubes, in a Minecraft-style on their individual boards. For example, a one-handed sword will need two cubes of wood (representing the sword hilt) and some metal or dragon teeth cubes, arranged in any order players desires as long as they are connected. However, players can try to match the equipment cards’ cube arrangement for extra victory points and additional powers. Once sufficiently equipped players can attempt to take on a dragon or even fight amongst themselves.

None of the elements of the game are particularly complex or layered. Crafting is simple: collect resource cubes and keep in mind that attack or defence is based on the types of resources collected. Combat is straightforward: roll the dice and distribute the damage. Exploration is equally uncomplicated: add the tile in the right zone and avoid stepping into the lava. However, there are small touches that link all these elements together. For example, match an equipment card and get an ability that grants you an extra movement or resource, or, delve into the third circle of the volcano and you might discover the tile that will allow you to escape.

Even though your characters are stuck in an about-to-erupt volcano and are attacked by powerful dragons, the stakes are not remarkably high. Failing, for example being defeated by a dragon, is not a major set-back and has little consequence.

It could have been a joyful experience of fitting the pieces of the board together. The building of the board begins with the outer border that also serves as the victory point tracker. The central piece is the characters’ starting point and the board grows from there connecting to the edges towards the latter part of the game. The pieces are quite intricate and precise, so having even one out of place immediately throws the whole game out of sorts. That is in addition to hundreds of small cardboard tokens (many of which blend in with the board making them hard to spot) and the 3D temples, that while looking beautiful, have the practical purpose… of holding two cards.

The fun of playing Fuji Koro is undermined by the frustration with dealing with its components. Certain elements of it, like the board tiles, are over-thought: they look beautiful but are fiddly to handle. There is something so appealing in the simple gameplay that takes the shogun heroes on an epic journey: from crafting their weapons and gear, to facing the mighty dragons, to escaping, last-minute, as the ground turns to lava under their feet. Yet, this will also take time and effort to set up, assembling the temples and sorting the components, and then will have occasional frustrations along the way. More patient and forgiving players will find a lot to love in Fuji Koro, others may want to seek a less component-heaving hero story to enjoy.

Fuji Koro’s simple, yet engaging gameplay is very appealing, however, it gets dragged down by elaborate components that while looking gorgeous on the gaming table, are fiddly and frustrating.

TRY THIS IF YOU LIKED: CITY OF KINGS...

Fuji Koro is City of Kings-lite, offering a similar tile-laying dungeon-crawler experience but focused on a single play, rather than a campaign.