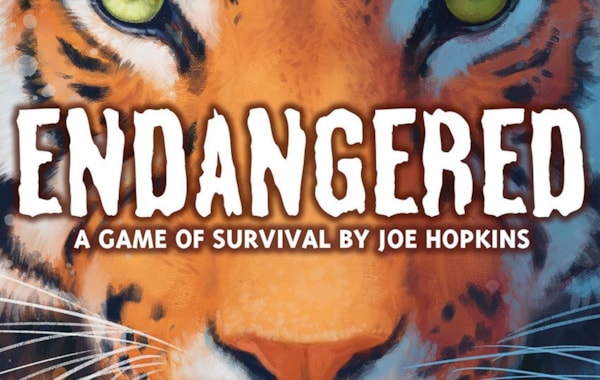 You're spoiling us, Mr Ambassador!

At the time of writing much of California is on fire. The pictures look like a futuristic hellscape of pinkened ash-filled skies. Earlier in the month a Japanese owned oil tanker crashed in the waters of Mauritius, making the usually idyllic blue waters a slick black. Habitats of many creatures in both these regions will be destroyed, and millions of creatures – from the cute and cuddly to the frankly fascinatingly ugly – will die.

That’s not the most cheerful start to a review, but it’s the premise that Endangered is trying to tackle. But rather than approaching the systems which contribute to these disasters, we’re going down the route of activism and awareness. It’s a game where, if you can convince enough ambassadors to stop pollution, then the pollution will stop. If this turns you off immediately, then the theme might not mesh well with your worldview (we personally bounced off it quite hard). But underneath there’s a really strong game that does express the stakes powerfully.

Each player takes a gender-flippable ‘role’ board and deck, a bunch of dice, and sets up the board to present which habitat is under threat. Each turn you roll your dice and then activate the actions on the side of the board. These can be things like gaining money, moving animals around the habitat, cleaning up pollution or destruction, and placing new action cards from your hand. These cards placed can then be used later for more powerful, or cheaper, actions. The catch is that you can only place a dice on an action that already has a dice on it if your dice is higher than those present, meaning spending a five dice on an action might block out other players on their turns. Working together properly is critical, if you don’t, and you expect someone else to ‘do it for you’ then everyone might be in trouble. Which as a metaphor for what the game is trying to get across is strong.

All of this happens while deforestation (for the tigers) or pollution (for the otters), creeps over the board. By rolling more dice you add destruction tiles to the board, which if they touch an area where the animals are, will wipe them out. On your turn you’ll also roll for breeding, if there’s a pair of animals sharing a square on the board. Without careful management of the furry friends at hand it won’t just be them hoping to get lucky.

The feeling of the game, even in solo mode, is one of a looming and unstoppable threat – and whatever you do is only going to stem the tide until you can get someone with some real power to act. Which is what you’re hoping to do. Convince enough ambassadors by either having a situation that’s bad enough, being rich enough or adding enough influence to their card, and you might win by the time the game is up.

While pretending that a zoologist and a TV presenter are the same left us feeling a little strange, there’s more than enough here to explore the enormity of ecological threats facing the fauna of this planet. A game that gives us a little glimmer of hope, even if it’s hard to believe.

Aside from the slightly strange feeling approach to ‘solving’ the problem, Endangered is a great entry in the ‘eco-game’ category. It’s also really good – and maybe better – as a solo experience. Handy if your gaming group feels endangered themselves.

TRY THIS IF YOU LIKED Garden Dice…

Endangered might have a heavier theme than this dice-grid gardening game, but if the mechanic works for you, it’s a great addition.