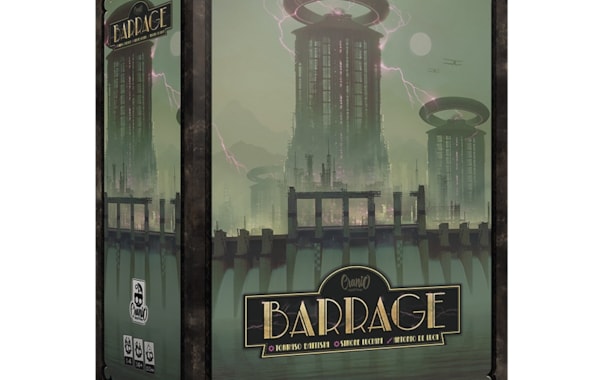 You stand gazing up at the mountain and the tributaries that carve their course like a scar. Others may see beautiful bubbling rivulets, but you see untapped potential, money and power. Barrage transports you to the world of 1920’s industry where rival companies from different countries compete to use the mountain’s natural resources to capture, control and harness the energy of water… and every drop counts.

To produce energy, which you are always striving to do, you need a dam holding water connected to a conduit, which in turn is linked to one of your own powerhouses. You’ll also need engineers (your workers) and a space at the turbine station in which to place them. It’s important to start producing energy as early as possible, because the more energy you produce each round the higher up the energy track you travel, which gains you more credits and allows you to earn valuable victory points. You may use drops in neutral dams (though you’ll have to fight off other players to do so) and you can channel water through opponents’ conduits (though they will greatly benefit), but it’s most satisfying to have your own complete systems.

There are multiple basins across the map with positions for dams, conduits and powerhouses at different levels. The higher you are the more expensive it is to build dams. If you can catch the water at the top of the mountain you have more control over it and can prevent it from being diverted before it reaches your powerhouses. Conduits can push water across, down and even up the mountain, changing its natural course and – if you have a cunningly well placed chain of structures – allowing you to reuse the same water multiple times. 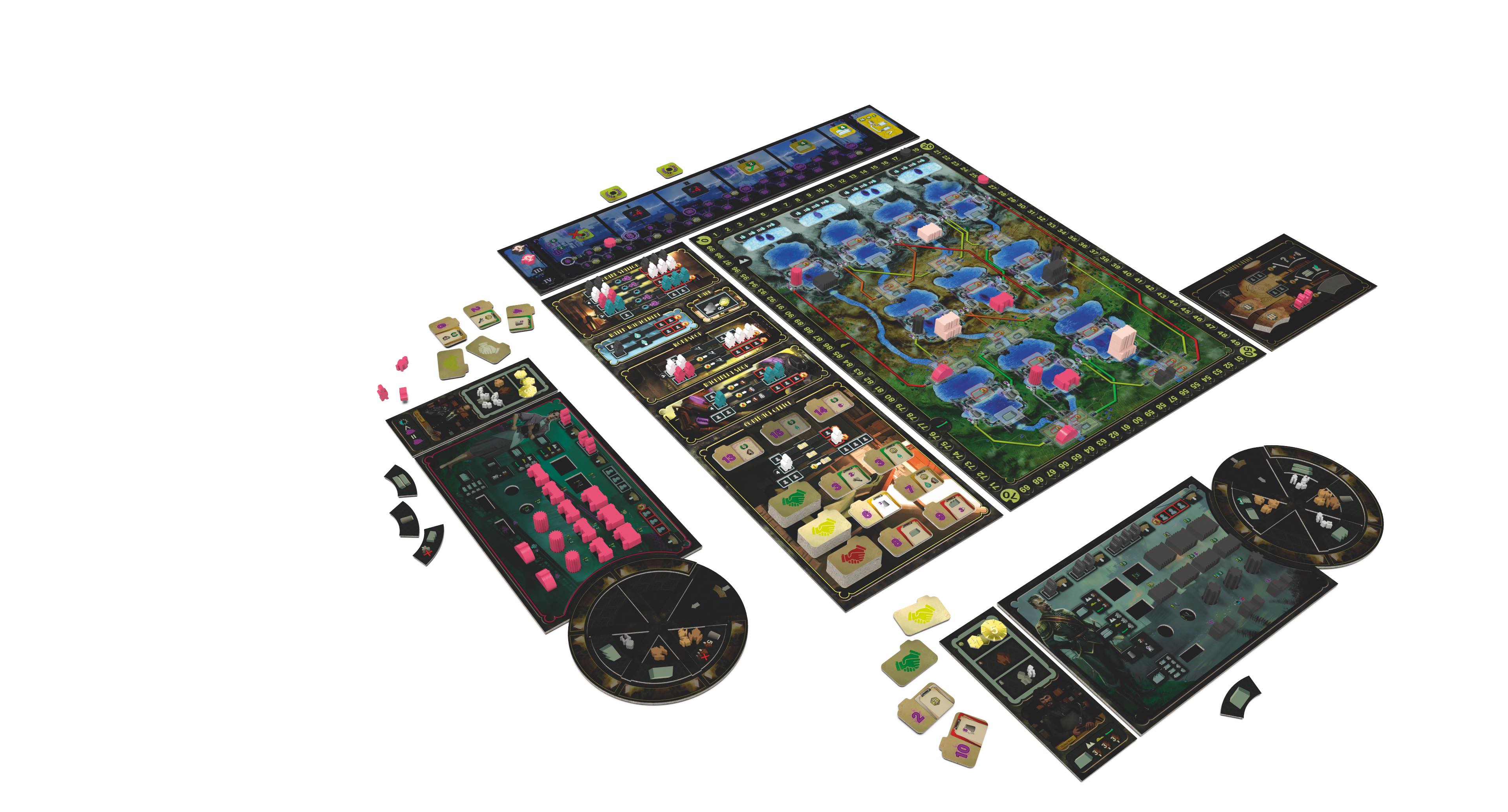 Your construction wheel is used to build each structure – a dam, conduit or powerhouse. You match machineries (excavators and concrete mixers) with technology tiles, which then become locked into the wheel until a full rotation is complete, preventing rapid construction and forcing diversification.

This is an engine building game, but it takes a long time to build the engine and feel like you’re making the most of it. Once complete, you may still be disappointed in your output. Indeed, even when you have a powerful system of structures if the water is diverted elsewhere you could be left high and dry. There never seems to be quite enough of anything – water, machinery, engineers, spots on the board and there’s often a sense of frustration that you are perpetually falling short of your master plan. Of course, when all the pieces slot together and work perfectly it’s incredibly satisfying. As with many engine builders, this is a game of runaway leaders. Get things working quickly and you may streak ahead. It’s fun… when you’re looking back at others.

Barrage feels like the kind of game you need to play a lot to get good at. You have to be very strategic about where you place structures and advance planning is essential, which is why the Automa (designed to represent a player enabling solo play) doesn’t work well. You could build lots in the cheaper lowlands – waiting for the water to reach you, or head for the hills where the rewards are greater. You could prioritise conduits to get points from other players’ energy production, but you may be left without well-placed dams of your own. Through delightfully sneaky structure placement, you can change the water’s path – directing it into different basins and almost stealing it from further down someone else’s course. Each player has an executive officer with unique special abilities which adds strategic flavour. In addition, building your third powerhouse triggers an extra (powerful) ability, so it pays to build these early.

It’s worker placement, so you are often frustrated when a space is occupied just before you manage to place your own engineers there. But it somehow feels extra harsh in Barrage, where meaningful actions take a long time to accomplish. While it’s complex and heavy, the fact that you have multiple engineers and have several turns within each round keeps the game moving surprisingly swiftly.

Barrage is not a game for everyone. It’s a little dry, despite the watery theme and takes several plays to get hooked. But it’s very clever, which it’s hard not to admire, even when your dams are empty. It’s a grower. Find others who enjoy heavily strategic industrial games and you’ve got a gem.

TRY THIS IF YOU LIKED:  Brass Birmingham

The themes are similar and both games require a lot of work. Though Barrage is lacking some of the variety offered by Brass.