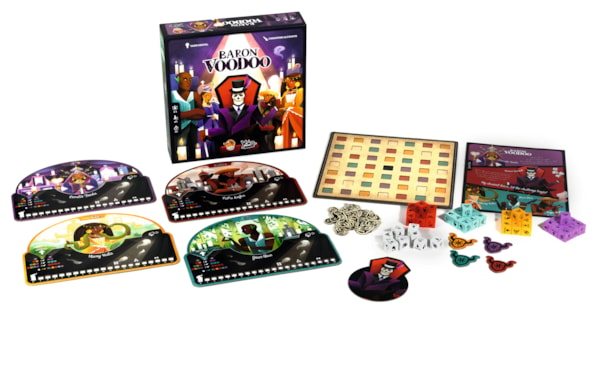 Imagine, for just a moment, you’re Baron Samedi, the voodoo god of death, and there’s a party you want to go to but you’re a tad too busy with collecting souls to be able to go, when other Loas (voodoo gods) offer to take your place for the evening. Perfect! Set them the challenge to guide the most souls into the kingdom, and the Loa gains your seat for a year. Now you can get to that party and take some well-earned annual leave…That’s the premise of Baron Voodoo.

To translate that into game mechanics, you’re going to be collecting dice in colour formations to try to gain the most points. You’re going to place the 48 soul dice on the board, by first throwing them randomly and then matching the colours. That gives you a board full of colours and symbols, and you’ll take your Loa boards and begin. Trapping dice is then an interesting game of leapfrog. You can move dice of your own colour to an empty space over a dice, and claim the dice as your own. You might even choose to stack your dice, landing up with up to three allowed, perfect for if you need to change direction or block another player. Capturing the dice lets you use its effect, and then you’ll send off your dice souls to gain points.

That’s before you consider the options you have with the tokens, which give you extra actions. Plus, your Loa have different powers, though, if you have the most white dice, you get the Baron Samedi Token, which allows you to use any of the Loa’s powers. On face value, it’s a lot of rules. Reading through the rule book feels as if someone has gone “oh and just one more thing,” and it’s likely what made the suggested age 10+ rather than 8+, based on similar play games (though it could also be the theme of death, as light heartedly as it is approached here). However, the rulebook does excel at making these straightforward. You know quickly what you need to do, and then you use the reference page until the nuances are committed to memory. A rulebook that works is a thing of beauty, and this has done well.

Speaking of beauty, it’s a wonderfully colourful game. With as many dice as there are, plus the eye-catching illustrations of the Loa themselves, it’s a pleasing game to look at and to show off. Setting up the game and laying it out is likely to gain an appreciative nod from new players, and whilst it’s a game that doesn’t add anything new, it is at its simplest, fun to play. You’ll build your strategy, thinking you’ve got everything lined up perfectly, and then your fellow players move that pivotal dice to stop you from cashing out those souls. Suddenly they’ve completed a colour combination and gained more points than you, and you’re back to scheming your next best move. Maybe you surge forward to gain the Baron Samedi token that lets you use all of the additional Loa’s powers, but you missed the quiet collection of point gaining colours. You’ll finish the game wanting to play again.

It’s fun without anything overly challenging, suitable for a wide range of audiences or groups, and it’s pleasing to look at. Play is surprisingly easy to pick up, and whilst in theory its theme is a dark subject, it certainly doesn’t feel it. Instead, it’s the kind of light you’d want to head towards.

Bright, quick to learn, with just enough strategy – you get a fun game to play, and Baron Samedi gets his chance to party.

TRY THIS IF YOU LIKED Endangered

A mixture of dice and fun, both are great games to look at and play, and both call you back for 'just one more'

Sometimes we may include links to online retailers, from which we might receive a commission if you make a purchase. Affiliate links do not influence editorial coverage and will only be used when covering relevant product