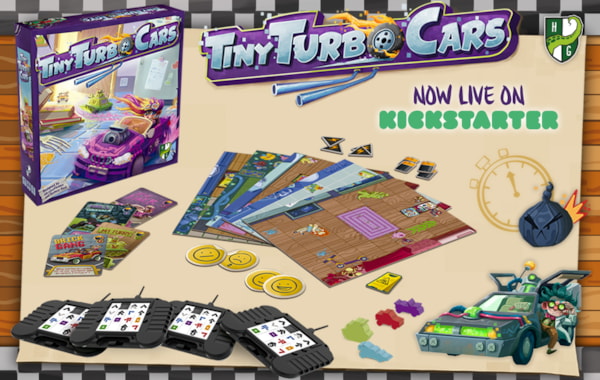 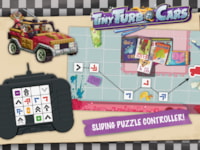 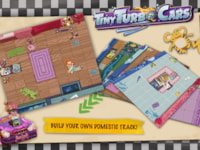 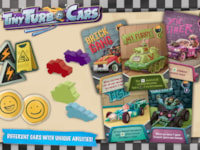 Tiny Turbo Cars is a racing game of domestic mayhem for 2 to 4 players where you use sliding puzzles to program the movements of your remote controlled toy car... and it is now live on Kickstarter!

Dodge furniture and furnishings and be the fastest to cross the finish line in customised in-house tracks! To move your car, you’ll need to think fast and use your sliding puzzles to program the most awesome sequence of commands ever… before your opponents!

At the beginning of each round, players will have to work their way through their sliding puzzle controllers simultaneously, trying to create the sequence of actions they want their car to perform during the round.

Each symbol on the puzzle corresponds to one of the possible actions. Only the 2 middle rows of commands on your controllers will be applied, so there’s room for manoeuvre, but think fast! The quickest to put down their controller will also be the first player to move their car during the round!

When the race starts, in turns, each player will execute the program they created on their controller. The sooner you play during a round, the safer you are that your actions will actually play out as planned, rather than crashing into unexpected obstacles… or other cars!

But beware, trying to be quick will also increase your chances to make mistakes... hitting obstacles or other cars will cause you to take damage, racing over water splits will make your car slippery and difficult to control, and carpets will slow you down... but don’t miss the crayon speeders for a speed boost!

Whenever you take damage, you lose 1 Battery, but don’t fret! Use the Recharge command on your controller to recover energy, then unleash the power of the Turbo command! The mory energy you have, the faster you will go! But that’s not all! You’ll also need to use the unique abilities of your car to create awesome combos! Enhance the commands on your controller, turn the hazards of the track to your advantage, and more!

This is a fierce race, with pitfalls around every corner and unscrupulous adversaries! Don’t miss your chance to shoot your missiles at your opponents… before they hit YOU! The first player to cross the finish line will be the winner of the race!

Can your fingers be as fast as your mind… and faster than your opponents? Rev up your engine and race into the danger zone with Tiny Turbo Cars!

Back the game here.