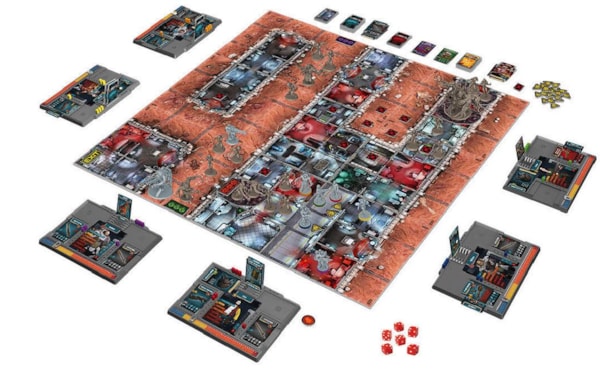 In Zombicide: Invader – the sixth standalone instalment in the undead-slaughtering series – players are trying to survive ways of Xenos: deadly mindless aliens that are basically zombies in sci-fi outfits... because you are playing Zombicide.

The series has managed to transport players from an apocalyptic modern mall to a medieval setting ravaged by a plague to, now, a mysterious dangerous alien planet without ever losing its core identity and what makes it recognisable.

Here is the good news: if you like any of the previous Zombicide games, you will like Invader, possibly even more than its predecessors. The bad news is that if you were not a fan to start with or were hoping to see something dramatically different from a Zombicide game, Invader won’t surprise you.

Like in every Zombicide game, players control a group of six characters with various strengths and weaknesses who are trying to survive a zomb– sorry, a Xeno onslaught, while completing various missions on a modular board. You will search for items, distract Xenos with noise and – sooner, rather than later – fight through multiple hordes and attempt to stay alive together.

No other board game does the ‘overwhelmed by enemies’ feeling better than Zombicide. Even opening the box and seeing a truly astounding collection of Xeno-zombie minis of all shapes and sizes is impressive. Once almost all of them have spawned on the board – which happens more often than you might think – and surround your characters, it feels both terrifying and exciting at the same time.

Invader does do a few things differently compared to past Zombicides. The thematic changes are especially fun. For example, there is an important distinction between interior and exterior environments; characters will need to pick up and equip oxygen canisters before they can venture into the vacuum outside, and weapons with bullets won’t work – so players will need to be careful about what they are carrying!

The biggest addition is the mould, a mysterious space goo that across throughout the board acting like an additional spawn point for enemies and another way for the players to lose if it overtakes the map. Abomination Xenos are a very formidable foe that spread the mould and are tough to kill, requiring them to be dealt with quickly to prevent further infection.

For the first time in the series, a concentrated attack is introduced, which allows even weaker weapons to focus their power for a chance to take down tougher enemies. This helps players in the early game before better gear is found, especially in dealing with the more frequent abomination spawns.

The mould tokens – big cardboard blobs – are the only disappointing component in the whole game. They look big and alien compared to the rest of the board, which is appropriate, but at the same time don’t quite compare to the quality of other components. Aside from the excellent minis, Invader’s plastic player boards are well designed to hold all the items cards and track the characters’ health, experience and skills.

Zombicide: Invader easily ticks all the boxes of what you’ve come to expect from the games in the series and finds a way to add a bit more to the table. Even so, the new additions do not necessarily bring novelty to the game but rather help the usual gameplay fit the new theme. If you love the feeling of adding several fistfuls of minis to the map and the satisfaction of clearing just as many off the board during your turn, Zombicide: Invader will be right up your airlock.