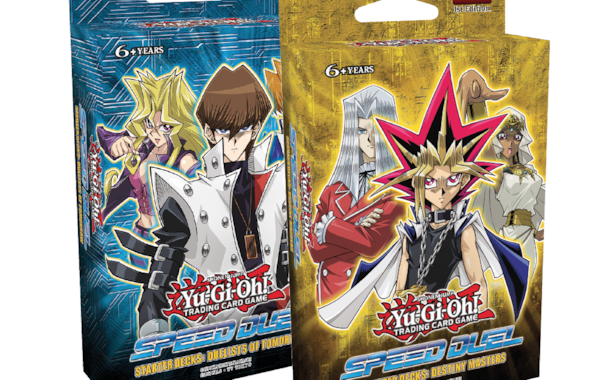 In the blink of a Blue-Eye

While it may not have the mainstream fame of Magic: The Gathering or Pokémon, the Yu-Gi-Oh! trading card game has been going on strong for 20 years now. Like any collectible game with dozens of card sets and rules additions, it can seem overwhelming to jump in now if you missed the train by a decade or two.

Speed Duel, a reboot in some ways and spin-off in others, aims to solve this problem. Based on the Yu-Gi-Oh! mobile app Duel Links, it’s a blazingly quick introduction-level simplification of the game’s extremely pleasing “summon cool monsters, spells and traps to mess up your opponent” battling. And it works a treat.

The first two Speed Duel starter sets – Destiny Masters and Duelists of Tomorrow – include three compact decks of just 20 cards, each themed around one of the series’ main characters and able to be played right out of the box. Despite there being two initial sets, you only need one to play with two people – though getting both will give you more options to fine-tune and mix things up once you’ve mastered the decks they come with.

Each character is also represented by a selection of skill cards – a Duel Links mechanic making its physical debut – one of which can be equipped and activated during fights to introduce a little more variety to play styles.

Although regular Yu-Gi-Oh! cards aren’t officially allowed to be used in the new format, the Speed Duel cards (they’re subtly watermarked with a hologram) can be split out of their set lists and built into custom decks, or even taken into the main game as the next step up for those left hooked.

While Yu-Gi-Oh!’s signature brand of over-the-topness can still seem a little ridiculous to the uninitiated at first – player life points, attack values and defence stats all measure in the hundreds to thousands, while the relative power of monsters is symbolised by a line of stars that would leave the Hollywood Walk of Fame feeling bare – the back-to-basics reduction of the main game's overgrown gameplay is refreshingly quick to get to grasps with. Draw a card, summon a monster, play spells, lay traps and attack your opponent – potentially all in the same turn. Everything moves so quickly and damage is dished out with such speed that it can be almost bewildering when your first few matches come to an end in a single-digit number of turns.

There’s certainly value to be found here for existing fans, with Speed Duel’s entirely separate card list allowing rare cards and old favourites to make a reappearance in what is currently a much more reasonably-sized pool. Even so, players who have already stepped up to the meatier full experience might find the trimmed ruleset here overly basic and lacking strategic options by comparison. Speed Duel seems unapologetically a Yu-Gi-Oh! aimed at those who remember playing as kids and want a cheap, easy way to relive their nostalgia (early noughties playground hotness Blue-Eyes White Dragon is present and correct), those who are currently kids and want something to blitz through multiple times during lunchtimes, and people tempted by the idea of a fun trading card game but intimidated by the pressure of building decks and learning the meta.

On those fronts, Speed Duel is a flying success. It manages to feel like the Yu-Gi-Oh! you remember, without saddling itself with the weight of the game’s own success. Sure, it’s ultimately a set of stabilisers for the proper thing that you’ll probably want to remove at some point, but when whizzing along is this much fun, you wouldn’t be blamed for simply enjoying the ride for as long as it lasts.

Veteran players will likely find the simplified gameplay a little lacking, and it might only sustain others so long. That said, Speed Duel is a wickedly fast and massively fun way to dive into a magnificently enjoyable card game – whether it’s your first time or not.