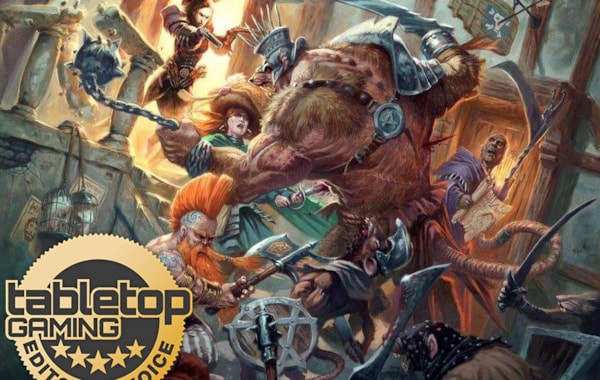 New experiences in the Old World

The dark forests and bloodstained battlefields of the Warhammer Fantasy world feel strangely comfortable again, thanks to a solid new ruleset that nudges the WFRP system into the modern age without losing its old familiar feel.

Gamers across the lands have been using one form or another of the RPG to stomp around Warhammer’s Old World for more than 30 years now, and there is something delightfully old-school about the feel of this new edition. Players are encouraged to randomly roll on tables to build their characters, magic is dangerously powerful and death is only ever one (un)lucky roll away. However, a lot has been done to clean up and simplify the rules wherever possible, creating a game that flows nicely once you get it on the table.

If there’s a criticism to be had it’s that there’s nothing particularly unique in terms of either rules or setting – but, honestly, that’s pretty much what you want out of a Warhammer game. The world itself has been freely borrowing from all kinds of fantasy tropes for going on 40 years – or at least it did until the official timeline was wrapped up a few years ago – and in turn has inspired countless imitators and offshoots.

Between the haughty High Elves and demonic hordes, perhaps the most standout aspect of WFRP is where it pitches its action. Even experienced characters fall well short of the incredible, reality-bending heroics that exemplify high-powered heroic fantasy games, but it doesn’t try to capture the desperation that comes from gritty, realistic titles either.

In fact, it’s perfectly positioned for telling the kind of stories that Warhammer Fantasy fans want to create, where the heroes somehow manage to pull off incredible deeds despite being wildly outnumbered and/or horribly outmatched. It fits into a world where the violence and danger mean an errant blade might take off your warrior’s hand but, rather than ending your career, you’ll probably just bolt an axe to the stump and be on the frontlines a few days later.

That does assume, however, that you and your friends decide to play as warriors, rather than rat-catchers, bankers and servants.

This brings us neatly to the ‘lifepath’ system, which encourages players to randomly roll up everything from their stats to their species. While this is great fun and can certainly produce interesting results, it has an unfortunate habit of spitting out normal, everyday people rather than adventurers.

In many other games this wouldn’t be a problem, but in a world so stuffed with combat that they stuck ‘war’ in the name it really feels like being a lawyer should be a background feature or origin story. Instead, it can end up being something that determines your character’s skills and level progression until you pay a hefty price to move to another career.

This is a fairly minor gripe, of course, and it doesn’t even need to be a problem if handled properly, but it does create a trap that inexperienced parties could easily fall into.

In any case, once you get out of the gates and stuck into adventures, things get a lot smoother. Basic skill and ability checks are handled with a d100 system that will feel instantly familiar to fans of WFRP’s first or second editions, though even newcomers should be able to get the hang of things within a couple of rounds.

There’s a slight variation on the rules for more complex tests that adds in degrees of success (or failure) rather than a binary pass/fail result. The mechanic is just similar enough to the core one that it can leave players staring at dice trying to remember what kind of check they’re making, but once a session is into its stride these issues fade into the background.

One of the areas where the complex rolls come to the forefront is in combat, which is a fast and furious affair that can be deadly if approached lightly. A neat advantage system means that every successful attack, parry and manoeuvre adds an extra bonus to your rolls, giving a real sense of momentum carrying the battle back and forth.

This all contributes to building up a system that does exactly what it set out to do. There are a few minor niggles here and there, but if you’ve ever had an urge to ride through the Reikland and go hunt some chaos cultists, WFRP’s fourth edition is the ideal place to start.

As comfortable as an old jumper, as dark as the depths of space. A real return to form for the venerable series.