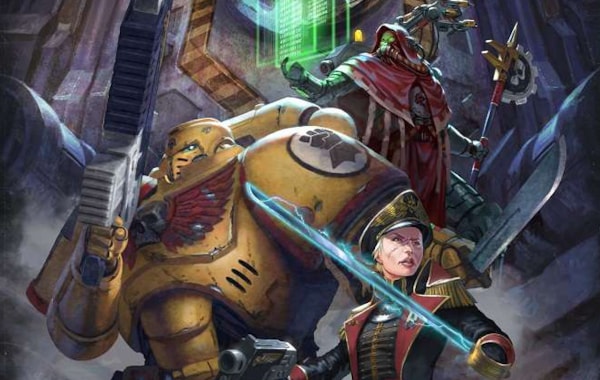 For the glory of the Emperor?

Of all the RPGs based in the grim darkness of the Warhammer 40,000 universe, Wrath & Glory probably comes the closest to pinning down its chaotic, customisable and often contradictory tone. However, this comes packaged alongside a rulebook stuffed with confusing design decisions and a worrying amount of outright errors.

The 40,000 universe is a mish-mash of a thousand different sci-fi and fantasy tropes that flips between outrageous power fantasies and unrelenting horror. It’s a setting that blends the aesthetics of Soviet tenements with death metal album covers, where regular humans fight alongside gene-spliced demigods, the nominal good guys are xenophobic fascists and mystic powers have a decent chance of melting your brain.

As you might expect, this can throw up a few challenges when it comes to creating an RPG – if you tried to slot in a traditional D&D party the elf would be instantly murdered while the paladin could conquer a small city single-handed. Earlier 40,000 games have aimed to capture the blood-soaked world of Games Workshop’s flagship wargame a piece at a time, but Wrath & Glory instead goes for an all-encompassing route.

It avoids the issue of pairing up nigh-on invulnerable Space Marines with the famously fragile human grunts of the Imperial Guard by breaking out the game into five separate tiers of play that will last an entire campaign. At first tier the party could be made up of a few soldiers or thieves dealing with problems that impact a town or city, while fourth and fifth tier campaigns see famous heroes in millennia-old powered armour set out to save entire star systems.

While it’s possible to run long-form epic campaigns in Wrath & Glory, the system seems best-suited for comparatively short adventures. This not only allows you to jump between tiers of play, but also gives scope for playing around with factions that don’t see eye-to-eye, which range from Aeldari Corsairs – think space-elves with their traditional arrogance dialled up to 11 – to gloriously silly Ork Kommandos.

Once you hit the table the game is chunky without being too fiddly, with a major focus on combat. This is another area that 40,000 RPGs have often struggled with, as the fiction of the universe often has huge gaps in the strength between different species and factions. When it comes to overpowered heroes taking on legions of disposable minions, Wrath & Glory allows the GM to bunch of several enemy troops into mobs that effectively act as one buffed-up foe, giving players the chance to be suitably awesome while still presenting them with a threat. On the other side of the coin, when weaker players confront tough opponents, they’ll almost always be faced with defences that are near-impossible to overcome.

The fact that Wrath & Glory does such a good job of bringing these tricky elements together makes it all the more disappointing that the rulebook itself is so difficult to recommend.

If you read a page of rules and have to spend a few minutes squinting at the words before it makes sense, it’s probably badly written. In Wrath & Glory this seems to be the rule rather than the exception. Good ideas are weighed down by confusing explanations and weak layout that hides important details within walls of text.

All this is made infinitely worse by the sheer quantity of mistakes. Large rulebooks from small studios almost always have a few problems here and there; however, the sheer volume of errors and typos in Wrath & Glory could strain the patience of even the most charitable observer. Is there a difference between ‘shock damage’ and ‘shock’? Does a Wild Card keyword just mean you can just pick one you want? None of the most obvious issues are too tough to adjudicate for a confident GM, but it’s another layer of complication in an already perplexing rulebook.

There’s a good game somewhere in Wrath & Glory – probably the best 40,000 RPG released so far – but if you want to find it you’ll need to sort through a fair amount of confusing mess first.

Come for the great ideas, stay because you’re not sleeping until you’ve found all the typos.