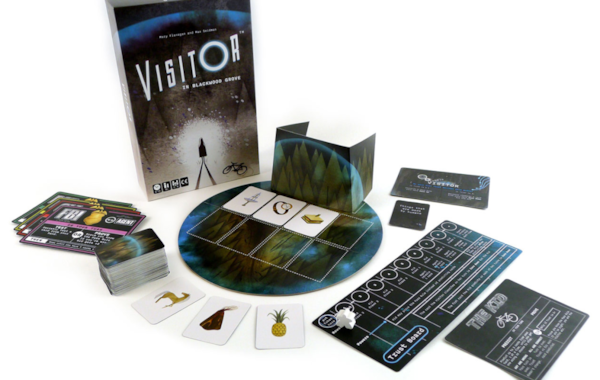 I want to believe in this alien deduction game, but...

Deduction games can be some of the most engaging entries in a gamer’s collection. They come with the potent appeal of problems to solve and mysteries to unravel, taxing players’ powers of logic, observation and intelligence. In recent years, though, there’s been a glut of games revolving around hidden information, and the result is that it can be hard to get excited about a new one hitting shop shelves.

Visitor in Blackwood Grove stands out from the pack with the allure of its theme. A flying saucer has crash-landed near a small town, with a child as the only witness. Government agencies descend on the site, intent on capturing the occupant. But the alien has a powerful defence mechanism: a seemingly impenetrable forcefield which stops the FBI, CIA and other shady three-letter government departments getting anywhere close. It’s reminiscent enough of E.T. and The X-Files to spark a surge of nostalgia in ‘80s or ‘90s kids.

The game sees one player adopt the role of the alien, while the others attempt to discover a way to break through the forcefield. One, playing the child, aims to help the visitor escape. The others, playing the agents, intend to capture it for their own nefarious purposes. Whichever side you’re on, you’ll need to test the boundary by attempting to pass various objects through it, drawn from a shuffled deck of cards containing everything from toys and musical instruments to pieces of fruit and electronic gadgets.

Before the game begins, the alien player secretly chooses a rule determining what kinds of objects can pass through the forcefield. It might be “red objects”, “things that make noise” or “things made from metal”. Each round, players attempt to breach the barrier with different items and, by carefully observing the ones that make it through, you’ll be able to spot similarities and start speculating about what the common factor might be. Have a chair and a skateboard both made it? Maybe you’re looking for things made of wood. A guitar and a smartphone? Maybe the answer is objects that make noise.

There are a handful of other mechanical elements – most notably a system representing the growing trust between the child and the alien, letting them exchange information without giving anything away to the agents. But the process of testing, observing and speculating is the heart of the game.

The trouble is that there are times when you’ll want to test a theory, but just won’t have the cards in your hand that let you do it, leading to some unsatisfying turns. Then there are the game’s production values. It comes with some thin card components; several arrived already bent in our review copy. The graphic design doesn’t do much to enhance the atmosphere, with lots of sparse elements which try to look mysterious but end up seeming a bit empty.

It’s a nice idea, and one that plays well with its ‘80s-inspired sci-fi theme. But it stumbles in the execution, and it doesn’t do much to inspire repeat visits.

Deduction games are often thematically thin, but Visitor in Blackwood Grove is a welcome exception with its nods to the 1980s Spielbergian concept of a child befriending an extraterrestrial being. Its actual gameplay does little to make it stand out from the crowd of similar releases, though, and the quality of its components leaves quite a bit to be desired.