Designer Thibaud de la Touanne’s decade-long career in video game development is clear to see in his debut release for the tabletop, V-Commandos. The stealth-action game features many of the tropes of modern first-person shooters: alarms to disable to halt enemy reinforcements, equipment dropped by defeated enemies, alert states driven by different weapons and environments, escort missions and a frolicking loose action-movie feel that will leave fans of historically-accurate World War II wargames foaming at the mouth.

While the rulebook features plenty of details on its real-life inspirations, V-Commandos is not designed to be a faithful portrayal of the Second World War – and it’s all the better for it.

Players can opt to go on a standalone mission – dictated by terrain cards with ready-to-roll objectives and tile setups – or an interconnected operation, comprised of a pair of cards with a narrative introduction, multiple maps and special rules. The flexibility means that a match can take as little as half an hour or stretch up to several hours, which is a welcome option.

The map tiles drive the game’s key stealth mechanic. As the player-controlled commandos sneak around in pursuit of their objectives – which are lovely and varied, from blowing things up and collecting objects to escorting hostages – the tiles serve as a simple way to track the alert status of enemies. Small tiles automatically keep commandos hidden, while moving onto the biggest tiles causes an instant alert (there’s nowhere to hide in such large spaces). In the middle are medium tiles, which require an extra action to move onto stealthily. The presence of enemies complicates matters, adding a straightforward stealth check dice roll to the proceedings. It’s a very easy system to grasp, but it works effectively, balancing just enough tactical consideration and need for luck as guards patrol automatically around the environment.

Combat is even easier, with dice rolls required to achieve a result dictated by each map tile – a tidy way of reflecting the complications of varying surroundings. Each die that passes the minimum result is a hit and instant kill – these are crack soldiers, after all – while stealthy melee attacks cannot miss. Enemies similarly roll dice, with the smartly-designed tokens communicating how many dice each guard adds to the pool depending on their weapon. (In the case of the deadly machine gun nests: a lot.)

Defeated enemies drop random items, which can include uniforms to disguise the commandos, crowbars to break open doors and other weapons. It’s all very silly, but the playful nature of it all calls to mind romping action movies such as Indiana Jones and Inglorious Basterds rather than the poe-faced nature of Saving Private Ryan. Hammering this home is the brilliant artwork, which applies a stylised cartoon cel-shaded aesthetic to hooded snipers and eyepatch-wearing mustached officers to great effect in both the components and the well-structed rulebook and separate training manual. 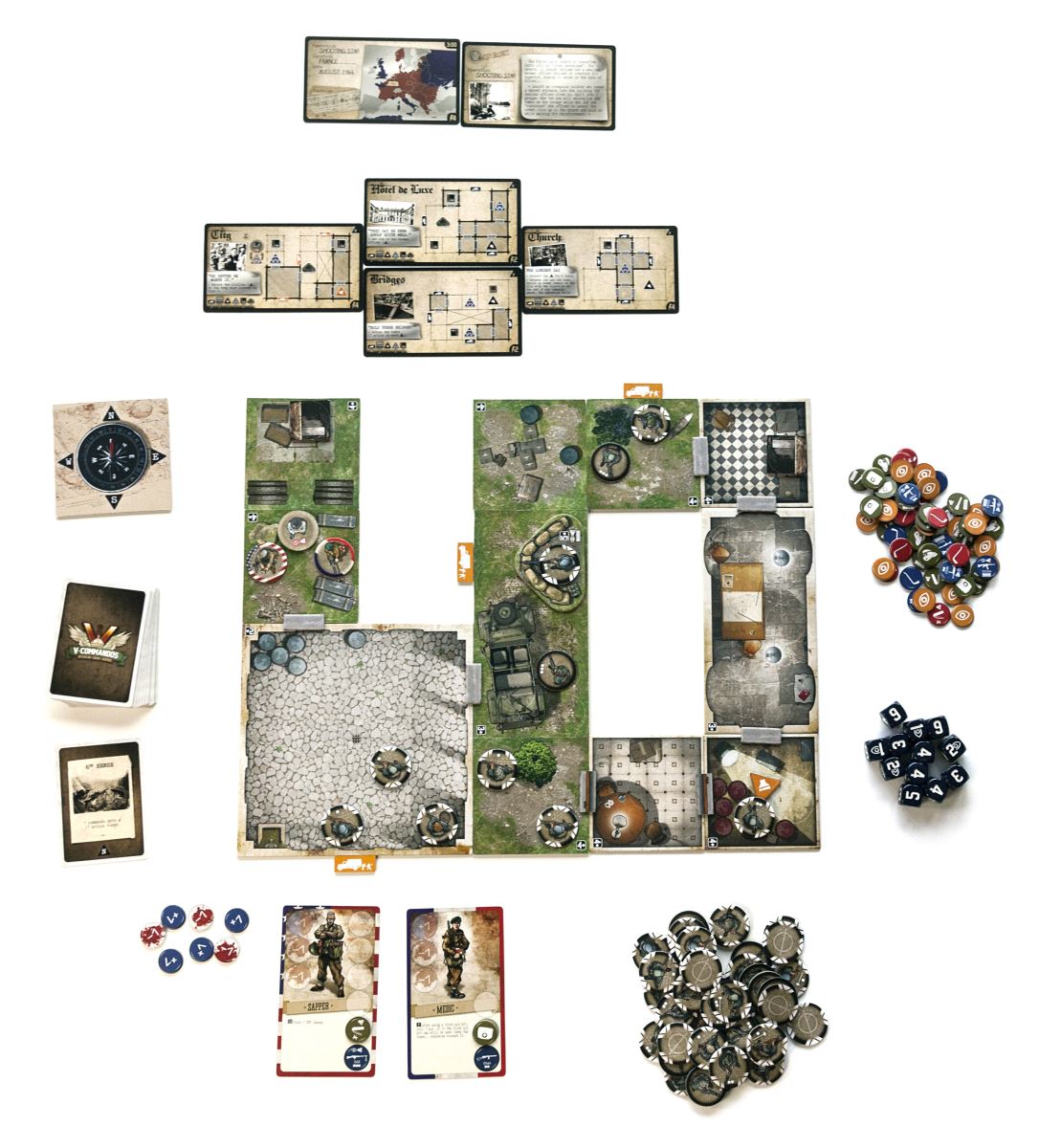 The strong element of luck is bolstered by the use of event cards drawn at the beginning of each round, which offer extra challenges for the infiltrating squadron – plant a flag in the ground to ward off an incoming friendly airstrike, for example. The random occurrences are a fun way to shake up each mission from being a simple ‘get to objective, complete objective’ rush and provide extra replayability and unpredictability.

V-Commandos’ back-to-basics stealth and combat mechanics are best suited to short to mid-length matches rather than multi-hour slogs through many consecutive operations, during which the simplistic charm may wear thin. That said, the foundations are so solid and the delivery so polished that you may very find yourself returning for game after game.

It’s the equivalent of sitting down with a beloved action flick: relaxingly light in the brains department, sure, but offering plenty to still fall in love with.

If you’re seeking another deep look at one of the tabletop’s most-explored conflicts, V-Commandos isn’t the place to turn. If you’re instead after a punchy, fun blend of video game and action movie tropes backed up by engaging and accessible stealth-action mechanics, this may be the World War II game for you.