Unearth may well be one of the most satisfying gaming surprises of the year. It’s a stylish, easy-going dice-placement game that polishes a dependence on randomness to a glimmering sheen.

From the box lid down, it’s hard not to be sucked in by the clean and elegant look of every aspect. Boasting isometric landscapes to rival mobile games such as Monument Valley backed by stark 2D artwork, the cards themselves vary between tarot, standard and mini sizes, providing a pleasing array of shapes when laid out. Simply, it just looks good.

Video game players are likely to be particular enamored – there’s more than a hint of Minecraft in the blocky stone hex tokens – but unlike previous Brotherwise hit Boss Monster the visuals aren’t here just to cash in on popularity and nostalgia. The isometric style complements the polyhedral forms and angled faces of the dice perfectly, giving the sense of a cohesive and unified world to the deliberately fleeting narrative involving tribes of mystical Delvers seeking to rebuild their lost empire from ruins and wonders.

Doing so is simple, as players roll one die a turn and place it on one of five ruins in the middle. Each player is aiming to collect sets of cards that either match their hidden colour or form a complete run of all the suits (which are worth far less). There’s more, though: ruins aren’t claimed by the highest roller until a total value is exceeded by the results of all the dice on that card, meaning there’s the opportunity to ‘outbid’ a rival by re-rolling or adding extra dice, often by deploying the power of Delver cards gained when an opponent claims a ruins your dice are sat on. 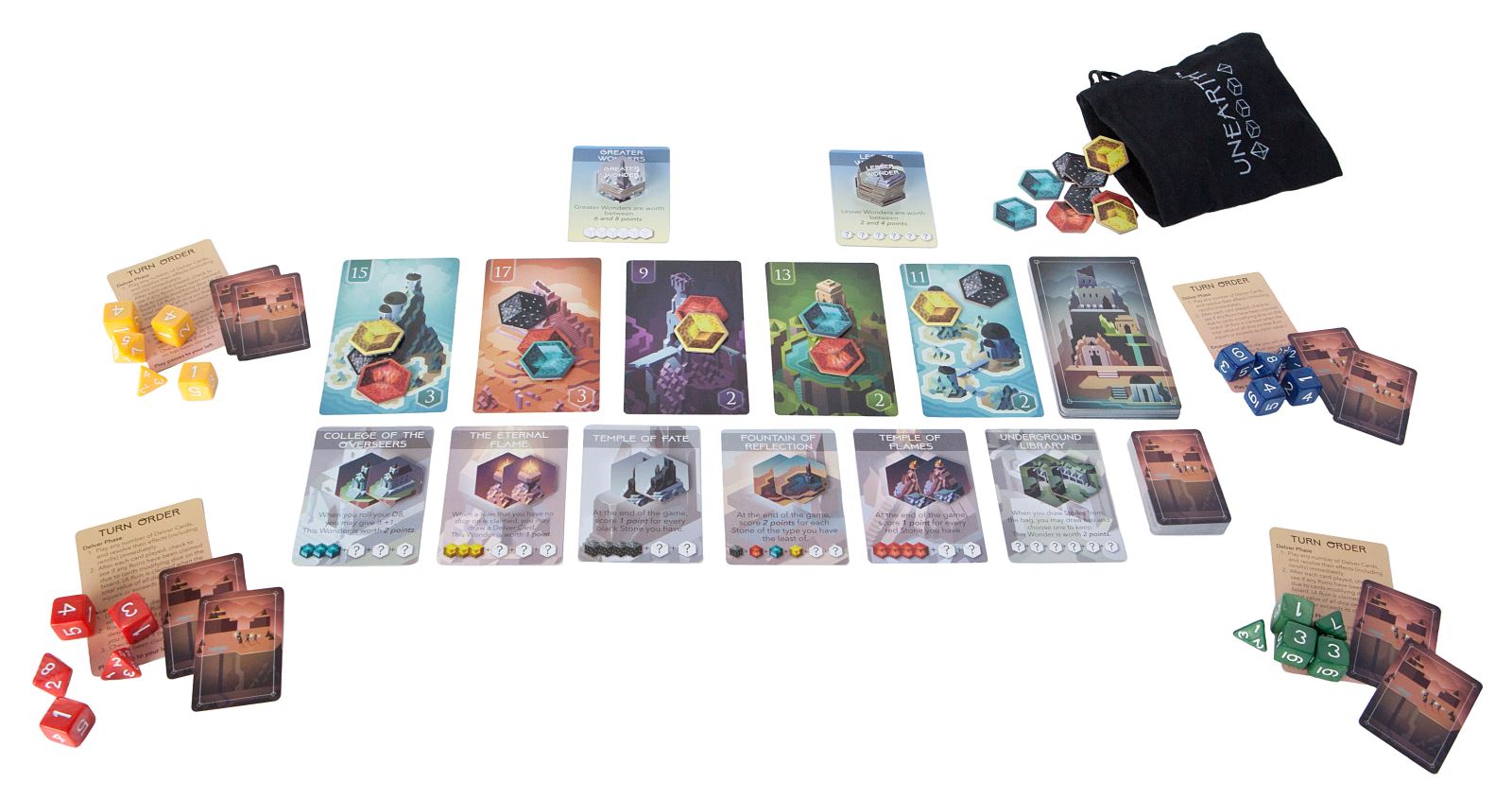 There’s an exhilarating sense of tension as you roll to swipe a vital card but, unlike so many dice games, very little of the frustration from duff throws. To thank is the second half of Unearth: you see, this isn’t just a dice-placement game, it’s also a tile-placement game. Rolling low on a die is unlikely to win you ruins, but will potentially claim a stone hex, that can then be arranged in front of that player. Form a hexagon from a certain combination of tiles and you’ll be able to claim a wonder, offering up bonus points or, in the case of one-off named wonders, ongoing powers to help catch up with players by manipulating the luck of the die. Rewarding low rolls is a fantastic way of adjusting for luck without feeling out of place, and the random selection of wonders means there’s plenty of variety between games.

In a refreshing break from games packed with dozens of d6s, players have the choice between a four-sided dice, eight-sided die and three six-sided dice. This is a small but significant point as you try to game the odds in your favour; the lower-value dice up your chances of landing a stone, while the d8 is perfect when going for broke on a high-value ruins.

Once a die is placed, it’s down for good until those ruins are claimed or a player runs out of dice and is forced to start re-rolling those already on cards. This makes choosing when to roll which die and where to place it vital to maximising your income of stones and ruins, expanding the strategy of Unearth without overcomplicating the incredibly straightforward turn-to-turn decisions. The entire game is packed with clever decisions like this that keep it easy to understand and smooth to play without ever causing things to feel repetitive, weightless or boring.

Unearth is a light game, but by no means is it a shallow one. There’s plenty here to dig into and enjoy when it comes to interesting choices and strategy – the stunning presentation is just a bonus.

Unearth finds clever ways of making its simple concept deeper than you’d expect, without losing the smooth turn-to-turn flow that makes it such a pleasure to play. If you let its gorgeous look pull you in, you’ll soon find yourself sinking into its seriously satisfying dice rolling with no regrets.