Underwater Cities: New Discoveries is a big box expansion for Vladimir Suchy’s stunning worker placement engine builder. Featuring a host of optional extras and game modes, as well as some seriously refined player boards, this impressive but pricey box raises the question; how have Delicious Games improved upon damn near perfection?

Upon opening New Discoveries, it’s clear that the new player boards are responsible for this expansion’s surprising heft, with each - of the eight included - comprising of sturdy, triple layered cardboard. Thanks to the recessed areas, players no longer need to live in fear of sending their cities careening across the tabletop at the slightest nudge - a common occurrence with the base game’s flimsy player boards - and they’ll last a lot longer too.

All the boards are double sided, with the base game’s four standard and four asymmetric layouts being complimented by a further eight options used for the expansion’s variant game modes.

The Metropolis Race variant alters the game’s usual setup by having players race to reach and fill empty metropolis sites from a limited number of options. Metropolis Choice on the other hand uses specific player boards, each dictating the number of each colour metropolis tiles players will have the option of choosing from at the start of the game. These player boards vary wildly, both in terms of the costs and rewards of building spaces and the combinations of metropolis tiles, making it perfect for those who enjoyed the asymmetry of Underwater Cities’ advanced boards. 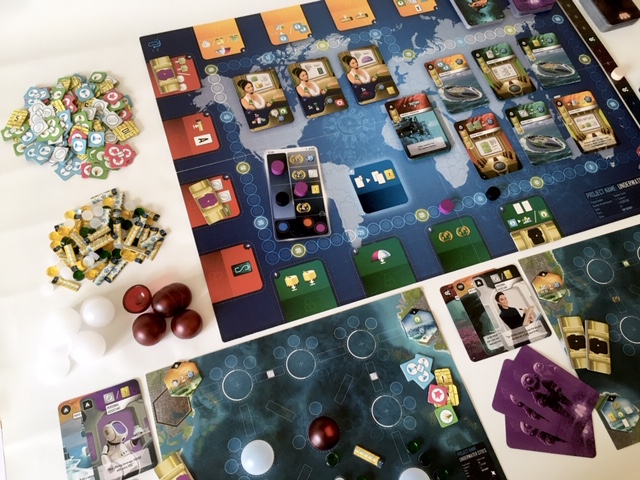 The Museum variant adds an element of exploration to Underwater Cities. Four new player boards come into play here, with each of them containing various discovery spaces which, when built upon, grant certain rewards. Each player begins the game with five discovery tokens to unearth. As each one is flipped over and revealed, an immediate reward is gained before being placed upon the separate Museum board for an even greater effect. Rewards become more powerful as more discoveries are made, but often on a first come first serve basis, turning exploration into a fiercely completive race.

Fans will be delighted to learn that New Discoveries includes a number of simple components designed to subtly enhance the regular base game. Rather than diving straight into one of the new variants, players can decide to simply add the brand new era cards to the three decks of the base game. This adds a decent amount of variety without adding any unnecessary complexity, perfect for introducing new players whilst spicing things up for those familiar with the game. Asymmetric starting assistant cards can also be used, replacing the fixed actions of the base game’s assistants with a choice of eight unique special powers. These new personal assistants each introduce an ongoing effect as well as the usual action, making them far more relevant and useful to the game than previously.

The last minor improvement to the base game is the option to use quick start tiles. Much like the personal assistants, these tiles help to establish differences between the players by offering a mixture of starting resources, and even cities and buildings. For those who feel that Underwater Cities occasionally drags on too long, these quick start tiles also ensure a shorter game by starting on round two of the era track.

New Discoveries is a great example of what an expansion should be. Aesthetic and functional improvements are welcome additions to a box that adds a generous choice of exciting variants geared towards greater player interaction. What’s more is the fact that each of these manages to compliment the base game without bloating the rules or feeling tacked on. Delicious Games have done a great job at supporting this well-loved game, breathing new life into its already vastly repayable format.

Whilst not strictly a ‘necessary’ expansion, Underwater Cities: New Discoveries is hard not to recommend. Fans looking to upgrade their original player boards might be put off by the price, but the excellent variety offered by the new game modes and personal assistants more than makes up for it.

TRY THIS IF YOU LIKED UNDERWATER CITIES...

The generous and seamless content of New Discoveries is definitely worth trying if you loved the clever card play and fresh mechanics of the base game.