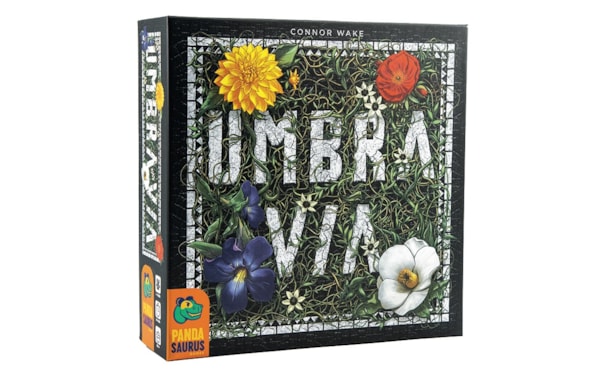 Describing a game as ‘abstract’ always feels redundant. We know playing chess doesn’t make you a general, no more than a worker placement game teaches you how to run a farm or a space station. But when you’re secretly bidding souls to fashion paths ruled by flowers, ‘abstract’ is pretty much the only word you can use.

Umbra Via (which loosely translates from Latin as “Shadow Road”) is an abstract strategy game which combines blind auctions, route building and area control into a game that feels like an ancient magical artefact.

Each turn sees 2-4 players bidding for one of four randomly rotated path tiles, using energy and soul flowers drawn randomly from their personal bag. Bidding is split into two rounds of secretly allocating flowers, revealing between each round so players have an idea where their opponent’s interests lie. Whoever bids the most for each tile gets to place it on the board, complete with all energy flowers that were bid on it (soul flowers are worth more when bidding, but removed from the game before the tile is placed.) 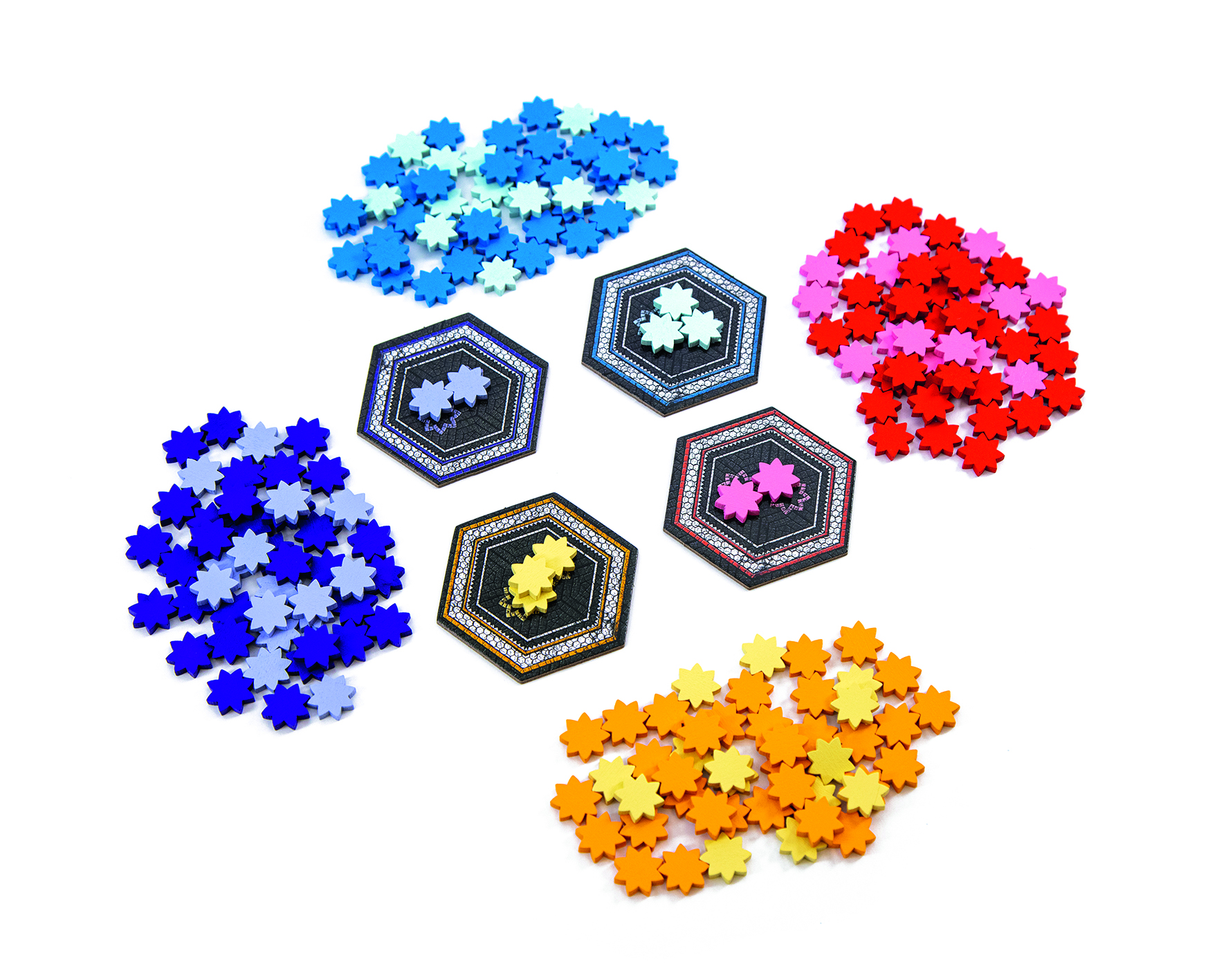 These new tiles must either touch an existing tile on any side (but not necessarily continuing either path) or one of the four centre spaces of the board if no tiles are in play. Once a route has been closed from all possible directions (either from other tiles or by reaching the board’s edge) all flowers on the route are counted. Whichever player has the most gains one soul flower for each tile in the path. To win, players have to empty their tray of eleven soul flowers and then score the tray (worth two souls) itself.

Right out of the gate, the lack of coherent theme makes it a hard sell for many, which is a shame given how beautifully it is presented. The flower tokens are brilliant, the player screens are beautifully illustrated, even the monochromatic tiles and board elegantly complement the coloured tokens.

If you can get your playgroup to focus on the lovely components and on the game’s objective, the actual mechanics are very intriguing. Every bid and path placement has consequences, so to succeed players need to be both forward thinking and able to notice opportunities to snatch precious points. Players with the most flowers on a path want it to grow, but doing so gives others the opportunity to claw ahead. Players who tie for control share the full points for a route, whilst players who place lower can still earn a diminishing amount of flowers as consolation. You’re never entirely out of the running if you can find a way to solve your problems before your opponents can solve theirs.

Another great touch is including three tiles which act wildly different from the normal paths, letting you play a few beginner games so players get a feel for the mechanics, before adding a splash of chaos to further muddle the waters and delicately tax your brain.

I feel that if the aesthetic design had either been more coherent (like competing gardeners arranging flower beds) or more arcane (leaning into the ritual-like elements more) it would have made getting to really good part (you know, the game) easier, improving the overall experience. If game theme is always tertiary in your interests over solid mechanics and wonderful production, I can happily recommend this. 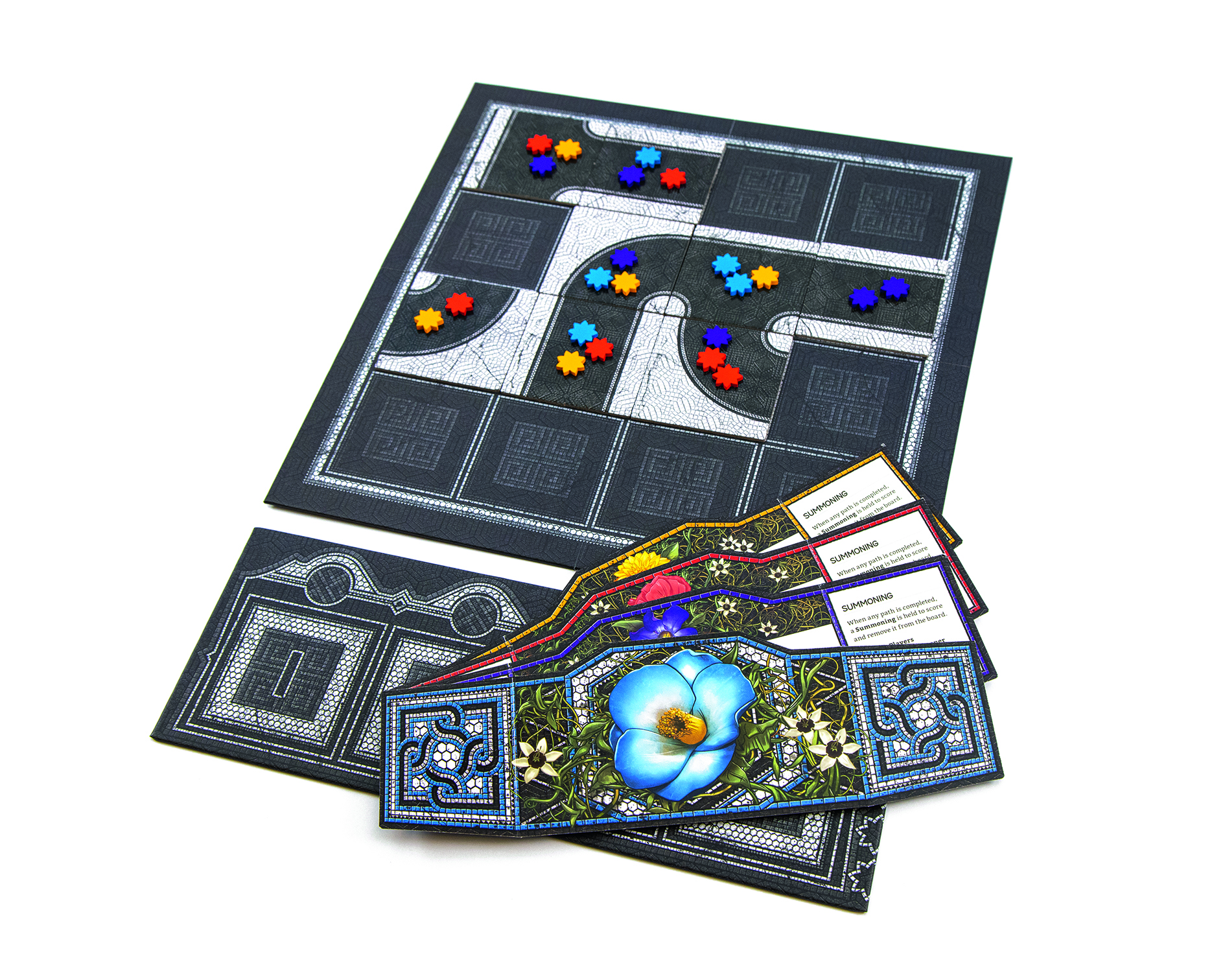 As weird a theme it may be, the ever changing nature of the game’s challenge and wonderful looking components make this an easy buy for players looking for a novel puzzle game

TRY THIS IF YOU LIKED TSURO

In many ways Umbra Via feels like an expanding version of Tsuro’s tile laying, dragon soaring game. If you loved building routes and sending your opponents dragons flying off the board, give Umbra Via a go