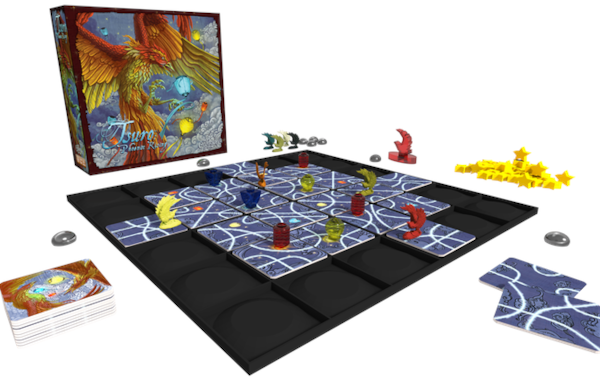 An expansion that perhaps didn't improve the original

The timeless gameplay of snakes and ladders could only have been improved by the addition of dragons, making Tsuro a modern classic in its own right. The second standalone expansion of the game, Tsuro: Phoenix Rises aims to uplift the gameplay even further, by adding more depth and strategy into the familiar tile-laying, route building gameplay

In Phoenix Rises, players are not only following the snaking paths from one tile to another, avoiding collision with other players’ phoenixes and perilous dives off the edge of the board. They can also pick up and rotate tiles creating their own paths, that hopefully pass through lanterns that in turn generate stars that players need to collect in order to win the game. Why are stars hidden in lanterns and what does any of it have to do with phoenixes? There is an explanation as convoluted as it is unnecessary, but at least the components are pretty.

As the flipping and rotating of tiles takes centre stage in Phoenix Rising, the game adds a moulded board which acts as a foundation for the tiles, making them easier pickup and manipulate. Yet the act of picking up a tile from a grid and putting it back in place is still wrought with plenty of clumsiness.

For example, needing to move the opponent’s phoenix, if it is on that tile, and having to remember its exact position to place it back, even though its original path has now been changed.

The ability to rotate tiles has added a delicious brain-scratchy element to the Tsuro’s gameplay. A masterfully matched path, with the assistance of a fair bit of luck can take a phoenix on the route around most of the board, collecting several stars in a move that feels satisfying, if not entirely earned.

There is something beautiful in the minimalist simplicity of Tsuro’s gameplay. Unfortunately, Phoenix Rising does not make a very good case for making this gameplay more complex. The fiddly additions – in both rules and components – needed to support this deeper gameplay take away from its elegance, adding more frustration than a challenge.