It's not exactly flying, but it is falling with style

In the crowded boardgame market of today, one of the better ways to fjnd titles you’re going to enjoy is to follow the work of a particular designer. One name that’s been increasingly prominent in the last few years is Prospero Hall, responsible for a bevy of licensed hits including Harry Potter Hogwarts Battle, Bob Ross: Art of Chill and Disney Villainous.

But caveat emptor because Prospero Hall is not a person, it’s a Seattle-based company, part of Forrest-Pruzan Creative which in turn is now part of Funko. All the same, if Toy Story: Obstacles and Adventures comes from the same team who created Villainous, a tremendous blend of theme and gameplay that lets you be a Disney baddie bringing off your diabolical scheme while throwing heroes at your adversaries, it must be worth a look.

Plus, it’s a campaign-based co-operative deck-builder with Disney Pixar’s most loved cast of characters, Legacy-style gameplay for kids, and at the very least that’s got to be interesting, right?

As it turns out Toy Story: O&A has less in common with Villainous and more overlap with another of Prospero Hall’s titles: Harry Potter Hogwarts Battle. Because it’s basically the same game, or at least the same game-engine, re-skinned with brightly coloured toys. There are five characters instead of four (and two girls instead of one) and six adventures instead of seven, plus some sweet adventure-track mini-boards with the dinkiest zinc tokens you’ve ever seen, but at its heart this is the Harry Potter deck-building engine – or what I’m fairly sure we’ll come to recognise as the Prospero Hall generic co-op deck-building engine for licensed movie franchises.

Which is not to say there’s anything wrong with it. This is a nice solid, balanced, engaging piece of game design. Everyone starts with their own deck of cards specific to their character, and builds it up to overcome a succession of group hazards and dangers, which must be beaten before the token reaches the end of its track. In the first adventure it’s the removal van heading to the family’s new home, in adventure two it’s luggage moving through the airport, and so on.

The sense of risk is palpable, players work together to optimise their strategy and the whole experience zips along. The problem comes with the choice of licence the game engine is applied to.

You see, the Harry Potter world is filled with living, breathing enemies who must be defeated in a very literal way. The Toy Story world, not so much. So where the Harry Potter game has you spending resources to get new spells to beat Slytherins and Voldemort, Toy Story: O&A has you getting new toys, mainly three-eyed aliens, to overcome ‘Trapped in a Crate’ and ‘Struggle with Jealousy’.

It doesn’t gel. It never comes together to feel like an unfolding story, nor to make you feel like you’re inside the world of the game. You’re gathering a collection of cards with pictures of your Toy Story friends on them. Any sense of immersion never got on the removal truck. This is the wrong game-engine to tell these toys’ story.

Having said that, my family had a thoroughly good time with it, and in the category of A Young Person’s Guide To Deck Building it’s an excellent introduction. The gameplay quickly becomes intuitive and although the first adventure is ludicrously easy to beat, the challenge ramps up pleasingly as you work through the different card packs. In a nutshell, the game’s subtitle – ‘Obstacles and Adventures’ – says it all. It’s a little bit unwieldy for the job it has to do, and the adventures take second place to getting past random stuff in your way. But if you know a family with kids who are looking to jump from casual games into something a bit more meaty, this is a cracking late Christmas present.

The gameplay is absolutely solid, but the Toy Story theme feels like it’s layered on top rather than properly integrated. Still, the pleasure of playing as Woody, Buzz and Jessie shines through. 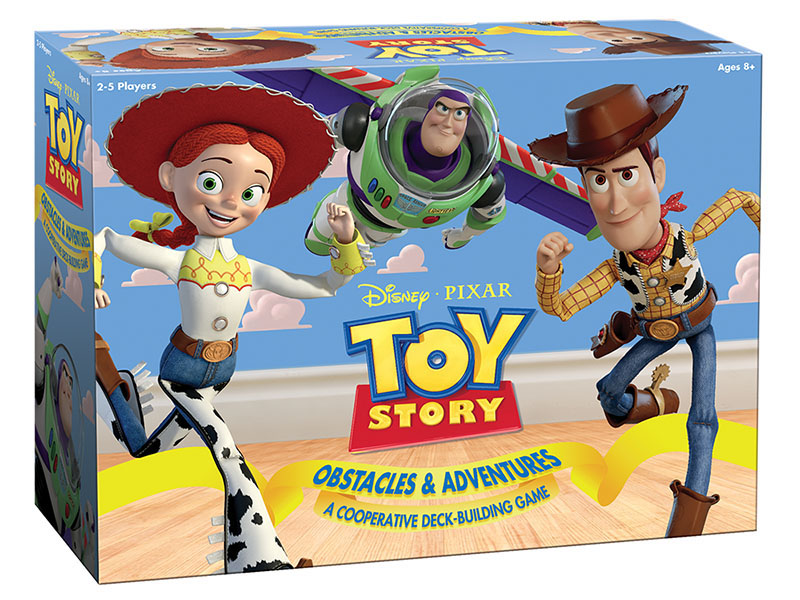