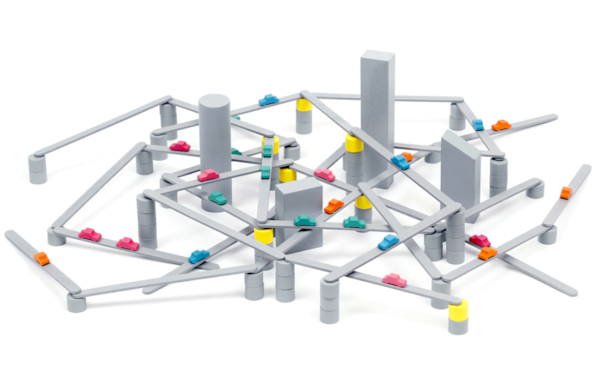 A beautiful, satisfying – if fiddly – road-builder you shouldn't bypass

If you’ve heard of Japanese publisher Itten it’s probably for quirky games like Stonehenge and the Sun, which requires a pendulum suspended from your ceiling, or Yeti in the House, where a yeti hides in your actual house. Tokyo Highway is its first title to get proper distribution, and the closest thing it’s done to a normal game. That doesn’t mean it’s a normal game.

Tokyo Highway is a rare hybrid: a tactical stacker. Each player builds a network of roads that rise up, dip down and snake around. When you place a road that crosses over or under another player’s road without touching it, you can put a car on it. First player to place all their cars wins.

The game has plenty of emergent strategy, as the table becomes covered in a glorious and intriguing network of roads and finding new places to build and score becomes increasingly challenging. The threat of running out of building supplies encourages people to build low, but the big points come from soaring high.

It’s beautiful. With starkly minimalist components, the grey of the roads and columns offset by the bright colours of the cars, it’s very satisfying on an aesthetic level.

Where the game falls down is where it falls down. If you dislodge an opponent’s piece you have to replace it, but the roads become so interlocked that it’s really hard without knocking over other bits – not to mention remembering what went where. The included tweezers are some help, but those with steady hands and slim fingers will have an advantage.

It’s equal parts tactics and balancing – and it’s a shame the balancing is a little unbalanced, because otherwise this is a delight that you shouldn’t bypass.