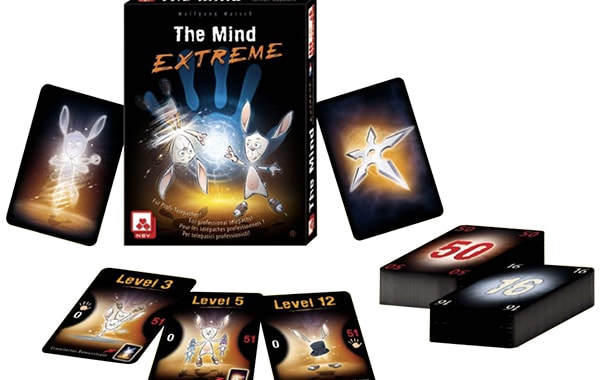 Of course there was going to be a sequel. When a game sells a million copies it’s going to get a sequel whether it needs one or not, and so it is for 2018’s surprise hit and Spiel des Jahres nominee The Mind.

The Mind is the poster-child for Marmite games: you love it or you hate it. I’m a lover, but I can understand the criticisms of the haters, many of which come down to it being a simpler version of Stefen Benndorf’s The Game, a 2015 release from the same publisher, also nominated for the Spiel des Jahres. The Game is also a co-op of playing cards in number order, but the cards go on multiple piles, and some are going up while others come down.

That’s pretty much what The Mind Extreme is – half-way between the original game and The Game. Instead of a deck numbered 1–100 it has two, both running 1–50, and you have to play the white cards in ascending order and the red cards in descending order, at the same time. Some rounds you have to play one or both decks ‘blind’, putting the cards face-down, so you don’t know until the end if someone’s gone out of sequence. This expert mode was included in the original game, but here it’s codified on the cards.

This is more than a simple sequel, it’s a genuinely more taxing version of The Mind, though paradoxically we didn’t find it harder to do well. Your brain has to split its attention between the two piles, and a large part of the fun is trying to guess what colour cards other players are waiting to reveal.

This is cleverer and more taxing, but there’s a piece of pure magic in The Mind that seems to have got lost in the sequel. If you like The Mind then this will amuse you, but its differences are not an improvement over the original.