Prepare yourself, agent, as the nefarious Dr Foo is trying to become master of the universe, using a time machine he built himself to loop from era to era, creating duplicates of himself in his evil super plan. Of course, your role as an agent alongside your fellow players will be to stop him from doing so, in a collaborative game that succeeds in layering a number of game mechanics.

Starting at the very beginning, the artwork for this game is one you want to look at. It’s got a clear style, and subsequent voice, that shouts “FUN” from the top of its cardboard lungs, and that resonates from the box, to the pieces, to the instructions. The downside of this however, is it’s a little divisive, the colour scheme on occasions a little distracting, which can throw you for a loop (geddit?). Some contrasts make it a little tricky to differentiate, especially notable in the rule book, where the colour choice makes it difficult to read and therefore distracting from the points at hand. However, in play, these are bright, fun, and really make it stand out from anything similar.

As far as play goes, essentially, you’ll be trying to sabotage Dr Foo’s equipment, by meeting conditions for that era. Doing so four times will defeat Dr Foo, but his duplicates, cropping up on each turn and creating rifts in time, will try to create vortexes, removing the opportunity for you to sabotage the equipment. It works well with this game also that whilst collaborative usually means a much ‘nicer’ game in terms of brutality, the game also includes defeat conditions, where it’s not just that you don’t win, but there are additional conditions where you lose. As a general rule, this keeps you focussed on that goal.

To have any real impact, you’ll be using artefact cards based on items through history. These are made up of everything from the Holy Grail, to Galileo’s Telescope, to a strawberry doughnut, and because you can also play a number of these cards each turn, you can get an impressive rhythm going to take away Dr Foo’s advantages, and its genuinely great when your fellow players do the same.

Whilst it does feels surprisingly component heavy to begin with, the components are notably pleasing. Similarly, it takes a few reads of the rules to work out the best course of action, but once you’re off, you hit the ground running and barely notice any previous concerns. Then, you can appreciate the fun in this game, whether from the funky artwork, to the witticisms in the rule book, to the artefact cards being as they are. It maybe comes across a little over complicated to begin with (this is the kind of game that would benefit from a video explaining how to play), it’s really clear the designers had fun in making the game, and that comes through into the play itself. 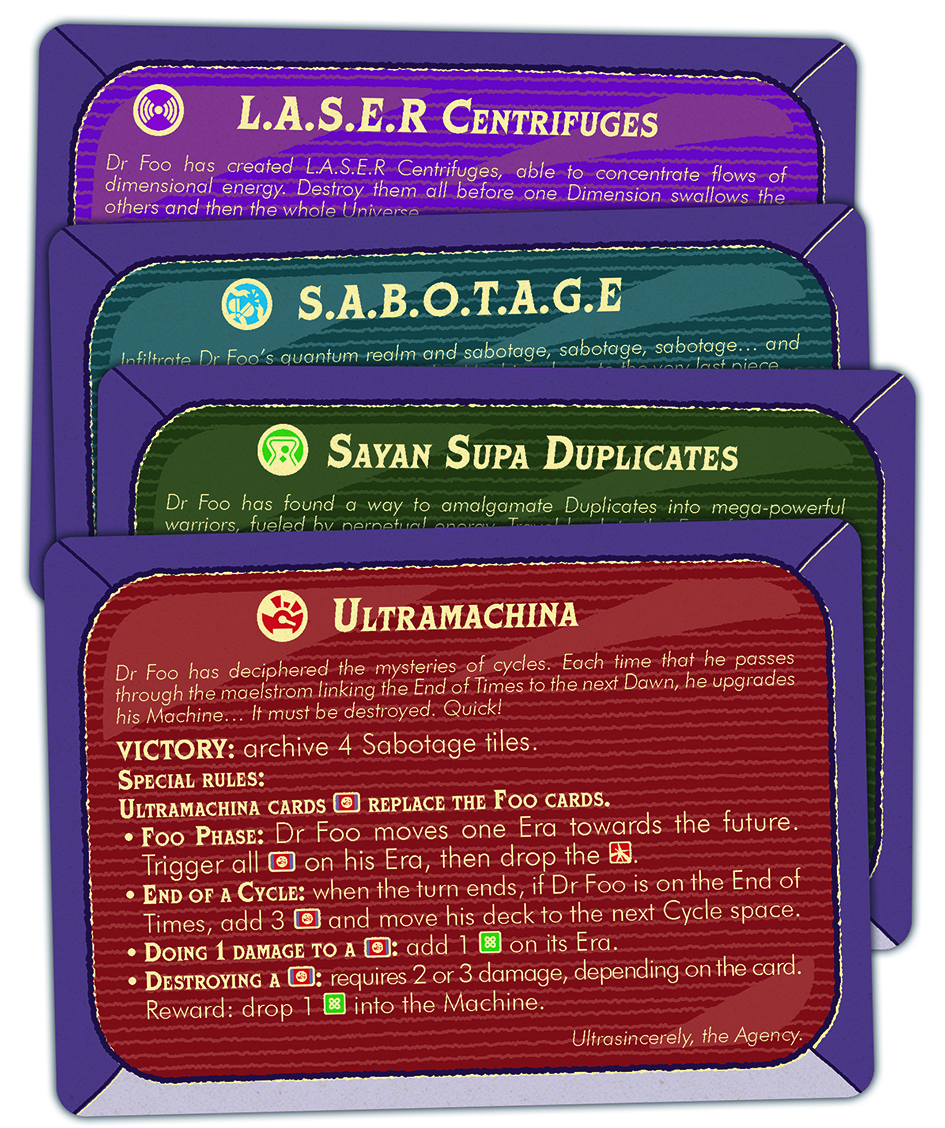 This game excels with multiple players, where there’s a sense of collaborative urgency, a celebration of victories, and a real attempt to avoid defeat. Whilst the game does have a solo mode, which in brief sees you play as multiple characters, it doesn’t feel like it has the same spark as the multiplayer game, where you’ll get the most from it.

If that wasn’t enough, it’s also got extra game modes of varying complexity, meaning once you can cycle through how you play, and these are brilliant. Overall, it’s a game that once you’ve learnt to play, and got your cheerful gaming group together, you can enjoy it for eras to come. So long as, of course, Dr Foo doesn’t take them over first.