Games Workshop’s new miniatures game offers an action packed experience… but it comes at a price.

The Horus Heresy: Betrayal at Calth is the latest in Games Workshops’ long tradition of standalone games, such as Space Hulk or the recent Assassinorum: Execution Force. These titles feature the highly detailed miniatures that the firm has become famous for but the box includes everything you need to start playing in a relative timely fashion. The game itself is inspired by the backstory of GW’s gritty sci-fi epic Warhammer 40k and details the moment when the evil Word Bearers turn on their former pals the Ultramarines, thus paving the way for the grim, dark future some have come to love in 40k. Ultimately though, it doesn’t matter if you’re not a 40k aficionado because the game itself is great fun even if you don’t know the significance this event played in the 40k background.

In gameplay terms, you and a pal will be stepping into the shoes of two different factions of opposing Space Marines (the Ultramarines or the wicked Word Bearers) then playing through the six scenarios included in the rulebook, which tell the story of that titular betrayal. Each scenario clearly explains what units you can take on the mission and how to set up the board. Ah yes, the board. This is actually a set of four double-sided sections with hexagonal spaces used for movement or shooting. Despite the fact there are only four (which is smaller than the likes of Zombicide or even Ghostbusters) they’re designed to be used in a variety of layouts and throughout the scenarios you never get that feeling you’ve played the same map before.

Right… how do you play, then? Well, players alternate activating their units (which consist of up to three models), so you’re never going to be waiting around for a go. When it’s your turn your unit will be able to spend one of its tactical points to perform the following actions: advancing one hex, running two hexes, shooting, close combat or a model can consolidate itself to join up with a new unit.

However, the deceptive thing about Calth is that, yes it’s a bit of a chore to get everything built ready to play, but the game itself is beautifully simple and flows so perfectly. Take combat, for example, when choosing to attack you select your target, create a dice pool (based on either your unit’s assault value if it’s close combat or the shoot values of weapons if it’s long ranged) and then just check the results on the clearly marked custom dice. Your opponent then creates a similar dice pool based on their armour value but is trying to roll shields rather than hits. There’s some slight modifications based on cover, etc. but typically it’s a superbly straight forward system that really helps to engage the player with the furious fire fights, rather than having to check a stat book every five seconds to see what the damage result is. 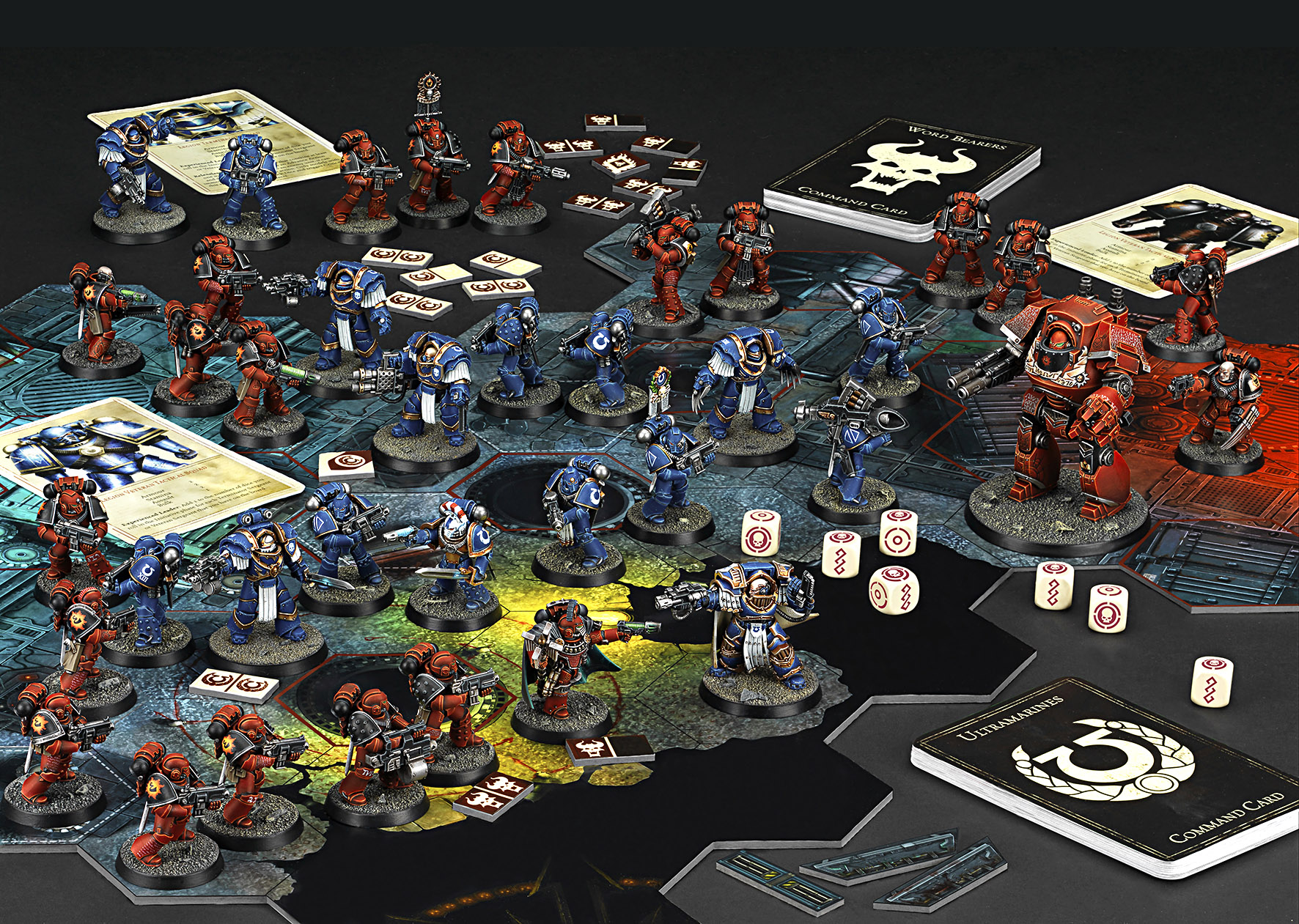 An extra layer of depth is added by a couple of things: critical rolls that typically tend to trigger the special ability of a weapon (e.g a Chainsword critical hit allows you to roll another die, potentially creating a chain attack, while a Boltgun takes a tactical point off the target) and command cards which can be discarded to trigger particular events/buffs. However, even with these extras, the real beauty of Calth is that you’ve got to make the most of your limited actions to take out your enemy, position yourself for potential future attacks and still try to complete whatever objective you’ve got. This agony of choice is present right from mission one when both players are racing to get to safety behind blast doors before a massive explosion. Of course, it’s tempting to get into a fire fight with your opponent but as the turns go on, the blast doors begin to close so you really need to leg it… unfortunately that might leave you out in the open ready to be shot. As a result those two tactical points never quite seem enough. What’s more, potentially humble weapons like the standard Boltgun can have a massive effect if you trigger that critical ability because your opponent’s unit will lose an action. Sometimes it’s not necessarily about wounding your enemy, it’s about blocking their options.

Talking of options, you can customize your squad of Ultramarines or Word Bearers with different weapons, so rather than opting for a Combi-Bolter, you might want one Terminator to have Lightning Claws to ensure he’s a bit of a beast in close combat. These optional load outs also reward multiple plays because you can try different combinations of weapons so even though there are only six scenarios, you might find they play very differently if you’ve opted for different offensive options.

The problem is that despite how fun, tense and genuinely engaging Betrayal at Calth is, that £95 RRP is high and will potentially put off someone not buying Calth as a cheap entry into Games Workshops’ Horus Heresy wargame. We realise that value is in the eye of the beholder and for someone who is used to picking up existing Horus Heresy models in resin for about £30+ for five, then 38 miniatures (including a hefty great Terminator) for £95 must seem like an absolute bargain. But if you don’t know your 30k from your 40k, then that price tag is much harder to swallow when you’re looking for your next purchase. It’s a terrible shame because this is such an enjoyable game that, at a more reasonable, price could have become an iconic classic like its predecessors.

The Horus Heresy: Betrayal at Calth is a tightly designed, clearly written and fast-paced action game that, after the initial set-up of building all the miniatures, is very quick to grasp. Each session is packed with tension and drama as you vie with your opponent for supremacy in the densely packed and claustrophobic environments. However, the price is a problem, which will put it tantalizingly out of reach of gamers who enjoy the likes of Zombicide or Super Dungeon Explore.

For those looking at taking their miniature games to the next level, then Betrayal at Calth features some stunning miniatures and well designed rules.