The big sibling to my inner turmoil

Mars wasn’t terraformed in a day. In fact, it takes several generations of raising water, oxygen and temperature levels, several wealthy corporations and some political interference. The latter comes in the latest Terraforming Mars expansion – Turmoil. In it, players’ delegates join or buy their place in one of the six parties (some realism has to be present!), in order to influence global events.

Besides a handful of project cards that get shuffled into the main deck, Turmoil operates almost separately from Terraforming Mars. At the end of a round players will turn their attention over to the two new Turmoil boards, establish a new majority party, select a chairman and resolve any global events. To balance the benefits from policies and global events, the Committee ‘taxes’ players one victory point each turn.

Losing TR is not a big issue mid to late game, however, it really stagnates players’ ability to develop their production engines earlier in the game. Most Turmoil bonuses depend on the types and number of completed projects. At the start of the game, players have usually not completed many projects, and so the return on their party ‘investment’ is not very profitable, whereas the loss of the TR is more palpable.

Terraforming Mars is not a short game. The game truly opens up when players establish their engines and are able to perform powerful project actions later in the game. This made some earlier expansions, like Prelude that sped up the beginning of the game, a must-have. Turmoil leans the other way, prolonging gameplay with its associated political machinations and slowing down the initial engine-building phase.

Veteran Terraforming Mars players, who are looking for an added layer of strategy and something new to do in the game will have a lot to enjoy in Turmoil. But, unlike some earlier expansions, Turmoil feels non-essential. 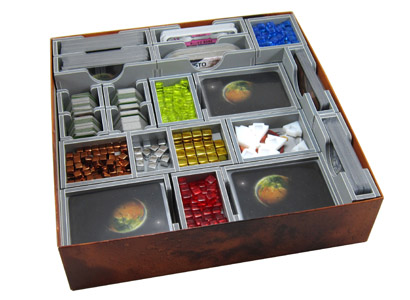