As tough to win as it is to pronounce

Designer Daniele Tascini is best known for 2012’s Tzolk’in: The Mayan Calendar, a complex, strategic game that used interlocking plastic gears to represent the passing of the seasons. Now he’s returned with another release that combines rich, brain-burning gameplay with impressive physical bits, and it sees him diving once again into ancient Mesoamerican history.

Teotihuacan: City of Gods casts players as citizens of an ancient shrine-city in what’s now present-day Mexico. It challenges you and your opponents to advance your social standing by hoarding goods, constructing buildings and demonstrating your devotion to the gods. As you play you’ll dispatch workers, represented by chunky coloured dice, to quarries, lumberyards and gold mines, and along the way you’ll help to build and lavishly decorate the city’s central pyramid – a three-dimensional structure that grows over the course of the game as players contribute to its development.

On first inspection, it all looks impossibly complicated. Teotihuacan’s board is a mass of tracks, stats and symbols that looks disturbingly similar to an Excel spreadsheet. But dig through its 24-page rulebook and it all starts to make sense.

The entire board, it turns out, is one giant rondel. You’ll move your dice around it, taking different actions based on the spaces they land on. Some earn you resources, others allow you to build houses. Some let you develop new technologies, or add wooden blocks to the temple pyramid.

What makes things tricky is that the effect you get from each location depends on the number of workers you send to it. Placing a single die on the gold mine, for instance, might get you a single nugget. But sending two or three could see you showered with precious metal, with a few bonus victory points thrown in for good measure. It means you’ll face constant decisions about whether to use your dice together for powerful effects, or spread them across multiple regions, allowing for greater tactical flexibility.

Whenever you use one of your workers, they’ll gain experience, represented by increasing the number shown on their die, and using highly skilled workers can also help you pull off more effective moves on your turn. If they ever advance to their sixth and final side, though, they “ascend” – a euphemism for snuffing it – and you’ll replace them with a new recruit starting at the lowest level.

The result is a pervasive sense of transience. You’ll build your way to a powerful position, only to start again with low-level dice. But with each repetition you’ll grow stronger, constantly gaining new ways to boost your score. You’ll spot point-scoring opportunities and put together clever combinations of actions; when it all pays off, it leaves you feeling impossibly clever.

This deep, satisfying gameplay comes at a price. Teotihuacan is a complicated game, and it has a handful of niggling rules exceptions that will see you referring back to the manual as you play. If you’re willing to invest a bit of time and thought, though, this is a powerfully engaging brain-burner. And if you’re a real glutton for punishment, it comes with some variant modes which ramp up its challenge to new levels.

Teotihuacan comes with a positively intimidating array of tactical possibilities, and it’ll take you multiple playthroughs to get to grips with the range of strategies it offers. Once you do, though, it’s a precision-engineered assembly of interlocking parts, and there’s a genuine sense of experimentation and discovery as you pull on its various levers to see what happens. 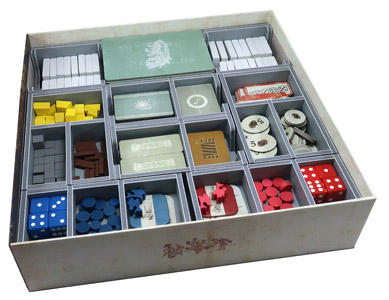 Compatible with Teotihuacan® including the Late Preclassic Period® and Shadow of Xitle® expansions.