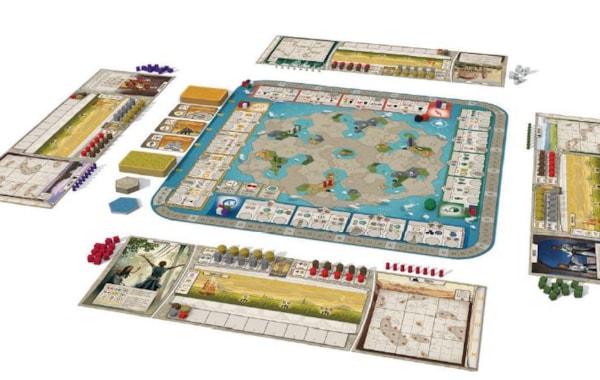 The isolationists have walled themselves in on a desert island, where they’ve pioneered irrigation and amassed a formidable military. Across the globe, a nation of entertainers send their citizens out to explore the world, equipped with their knowledge of clocks and air conditioning. Both pale in their innovation to the inventors in the west, who boast siegecraft, concrete and canned food thanks to their accelerated research.

This is the familiar yet strange world of Tapestry, an ambitious and largely successful attempt by Scythe and Charterstone designer Jamey Stegmaier to turn the epic task of building a tabletop civilisation for the ages into a swift, slick pursuit of victory points.

It’s impressively fast-flowing turn to turn, breaking down the development of each player’s civ into four basic tracks: science, tech, military and exploration. You pay the resource cost, move one space and do what the space says, from revealing new regions of the main hex map to conquering said regions or inventing a technology. Advance far enough and you’ll unlock buildings ostentatious but undeniably striking painted 3D miniatures to add to the layout of your separate city board, scoring points as you fill rows and columns of the sudoku-like grid.

The largely intuitive icons and simple actions make what seems a potentially dense mishmash of gameplay concepts expanding on the map, filling your city, advancing up tracks, adding tech cards to your display, increasing your income by upgrading yet more tracks on your player board easy to absorb, and ends up delivering a game that feels varied and pleasingly adaptable to different play styles. You might go all-out on inventing, exploring, expansion or city-building or some combination of each. Striving for an even balance feels a little less viable than it could given the rewards for reaching the ends of certain tracks, but the more than a dozen asymmetrical player civilisations each with a different unique ability – add to the opportunity to take a different path each time you play, stopping Tapestry from becoming one-note.

The meat of the game’s ‘advance’ turns is punctuated by five ‘income’ rounds, where exhausted resources are refilled, points are scored and the civilisations advance to a new era with tapestry effect cards played on their mat – another way to diverge your nation from your neighbours’. Later income turns see your haul of VP leap from single digits to dozens of points at a time thanks to upgrades and abilities, a satisfying sense of gaining momentum that also keeps everyone feeling like they’re in it to win it until the end – our final scores were all relatively close, despite worrying gaps opening up earlier on.

Each player takes their own income turns when they want, which allows for the welcome ability to largely go at your own pace, but the game only ends when everyone has had five. It’s a curious decision that has the downside of leaving some players twiddling their thumbs for several minutes while those remaining catch up, bringing the welcome pace of the rest of the game to an awkward and juddering end.

Tapestry’s other sticking point is its theme – or lack of one. Having no specific path for players to take makes for some amusing stories and diverse strategies – “My merrymakers invented time travel before paper!” – but for all the asymmetric civs and tapestry card effects it’s largely lacking flavour, leaving it feeling coldly mechanical under the glossy surface at points. (It does look roundly fantastic, at least.) Even the most exciting-looking buildings mostly translate to plugging holes on a grid (their arrangement beyond that counts for nothing), while inventing the most destructive and terrifying weapon in human history – the nuclear bomb – feels oddly inert, allowing you to simply score points and cover one of your own tapestry cards. If you’re not willing to bring your own sense of personality and storytelling to the game, it can become little more than an exercise in moving up tracks and scoring points.

If you’re willing to go along with Tapestry’s gleeful – if illogical – remixing of human history and forgive its sometimes shallow theme and disjointed conclusion for the sake of its thundering central gameplay, it’s a game that will keep you coming back to lead another civilisation to greatness in a new way. It might have a couple of loose threads, but it’s hard not to find yourself woven into its charms.