King of the Castle

Streets is a small box tile laying bit of perfection. If Carcassonne is the grandfather of the lay-a-tile-make-a-place genre of games this might be the grandchild to get the family fortune back on track.

In Streets players are dished out location tiles, and from a hand of three, decide what streets they’re going to add to or close off. Each location attracts a kind of person – hipster, tourist, parent, shopper, or wild – and score for either the number of matching symbols or people in the street when enclosed (bar a few exceptions). Players place one of their five ownership tokens on their tile along with the matching meeple, and if they’ve enclosed a street, scoring begins for that street (not including the end tiles) including one point for each meeple on the tile.

And once a street is enclosed and scoring is complete a mass migration takes place – which is where all the meeples in that street move to available matching tiles. If they don’t have anywhere to go, they get FOMO and stand up – waiting for someone to lay a matching tile and see a stampede of hipsters, parents, tourist or shoppers into their new location.

Streets is a hyper-condensed answer to Carcassonne’s 20 years of expansions, and it gives players the same buzz. While there isn’t the winner takes all aspect of sneaking into a castle and then taking the majority with a few handy extensions, there is a sense that once someone is going to claim a huge chunk of points for the street you started, you’re better off not contributing any further. It has the same sense of interrupted plans – someone takes the perfect spot for your next tile, or makes it impossible not to give them a ton of points when you finish your street. And it equally has the same joys if you’re on the other side of the nastiness. 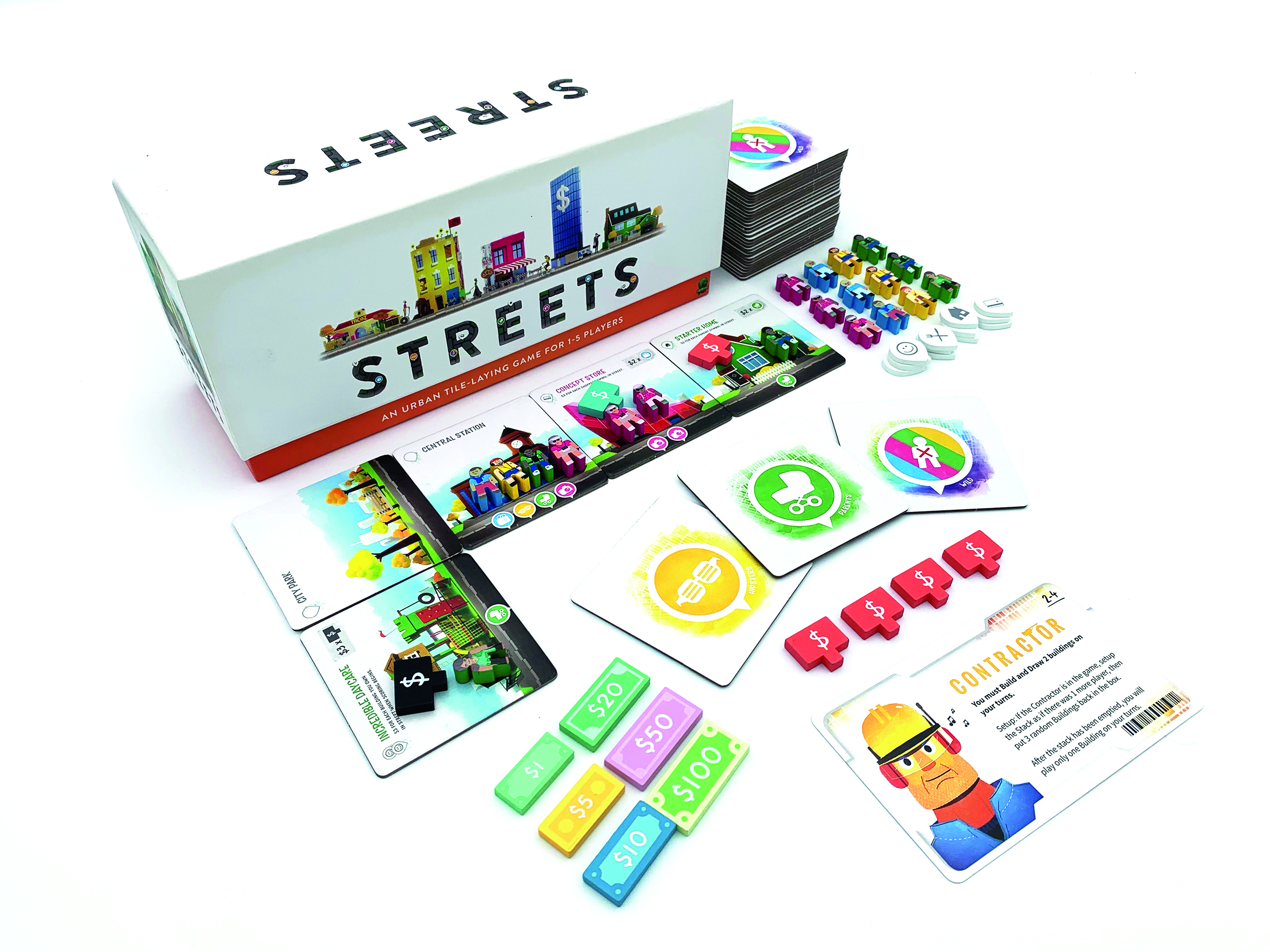 The two expansions in the box add a tiny bit of clean complexity and a little bit of asymmetry. The business expansion adds a bonus for those who score the most of a certain type of business at the end of the game, and the consultants give each player an additional powerful bonus (like the contractor who builds and draws twice in their turn, forcing them to use up their claim tokens or close streets quickly). After your first play you’ll be dropping these expansions in and out with each play group based on what everyone fancies at the time – they add little overhead and improve the interactions a great deal.

The FOMO mechanic is what we like about it the most though. A huge charge of points to your own tiles, if laid at the right time, is thrilling to go after. Or, if these meeples are heading to streets that aren’t your own when you enclose a road, you can judiciously dish out the meeples amongst your opponents as you wish – playing favourites or putting everyone at an equal disadvantage. This kind of choice is at the heart of the game, and not specifically part of the rules, but is here all the electricity of the social aspect of the game is generated from. Another perfect little box to stack on top of Villagers.

It’s hard to argue that Streets is anything but brilliant, compact and wonderful to look at, but it’s the way it brings the best part of gamers out that will keep us coming back again and again. Truly an indispensable addition to your collection.

TRY THIS IF YOU LIKED Carcassonne…

When it comes to tile-laying, there’s few things better than a great sprawl of Carcassonne – but if you’re on the hunt for that feeling, but fast, Streets may just usurp it for smaller groups.

If you enjoyed this review, be sure to check out the designers previous game in Villagers, which we also rated a Must-Play game!

PLUS, that game received an expansion called Shifting Seasons, and we took a look at both in this First Look video.