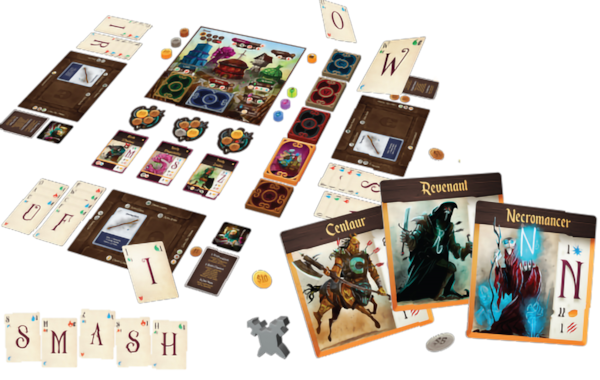 How to spell Scrabble with a D & D

As you’d expect from Christopher Chung, the designer of Lanterns, Spell Smashers is a tranquil group experience of making pleasing patterns so that you can KILL MONSTERS with THE POWER OF YOUR MIND. The English language even has a special word for these mind-patterns: ‘words’. Yes, someone finally did the Scrabble/D&D mash-up that nobody’s been waiting for. What’s surprising is not that it exists, but how good it is.

You’re all fantasy adventurers, except the game never really makes that clear. You get a fistful of cards with letters on them, and each turn you make a word. The number of cards in the word gives you the initiative order; the numbers and symbols on each card gives the amount and type of damage you’re going to do.

There are 26 monster tiles, one per letter of the alphabet, but they get paired with modifier cards with cute names and bonuses, so you can fight a vexing bugbear or a calamitous revenant. Doing damage gets you money because hit points are coins, in a mechanic that makes no sense but works really well. Killing a monster gets you its tile, which is worth victory points, but the tile also adds a new permanent letter to your collection, so the [E]lemental is a popular target and the [Z]ombie less so.

If the monster wounds you then you take a wound card for each one. Wound cards have tricky letters or letter combos on them and are harder to play, but you can pay the shaman in town to get rid of them.

The town is where things get a bit unstuck. The second part of each round is spent here, and you can heal wounds, get quests, or buy equipment, potions or ale. It’s meant to be a den of interesting choices but it never becomes that, and it feels over-fiddly.

The core of the game is absolutely solid and if you like word games then there’s plenty to enjoy. It’s not perfect; there are a few weak spots and blind spots. I have a particular quibble with the mix of letter cards, having twice got stuck with two Ws and some useless vowels. I could have spent gold to get rid of them with potions, but if you’ve got a lousy hand then you’re probably short of gold already.

Old-timers may be reminded of the Judge Dredd board game of the 1980s. Like that, Spell Smashers makes little logical sense and isn’t particularly tactical, but it’s a lot of fun. The lack of direct competition means kids can keep up with their parents and there’s enough strategy that, like Scrabble, a clever player has a good chance of beating someone who’s swallowed a dictionary.

A delightful twist on an old idea, Spell Smashers isn’t elegant but it is smart and fun. If you like word games or hitting monsters for money, you should try it.