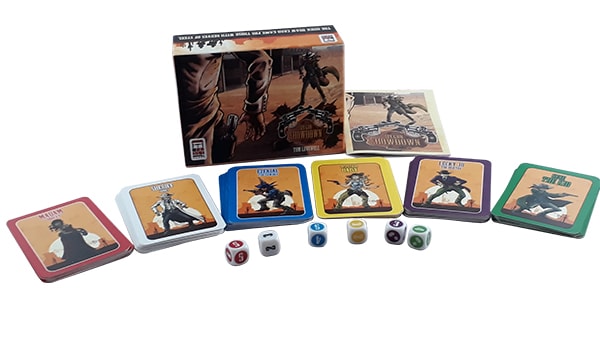 Its pistols at dawn. Or anywhere really, considering the diminutive box of this card and dice dexterity game. Played as a duel, each player secretly lays out a set of cards from their deck in front of them. Simultaneously they’ll flip a card of their choice, this could be one with nothing on, or a ‘draw’ – which here means they’re taking a shot. When this is revealed they must touch the other player’s cards before they can. If successful, they get a dice roll to fill their counterpart with lead, if not, they can roll for the shot, but the defender’s card is revealed which may contain a roll modifier – making them harder to hit.

And it’s better than it has any right being. The game eventually encourages you to hover your hand over your cards in the fashion of a Wild West gunslinger would over their holstered pistol. Tactical bluffing and speedy reveals can lead to surprisingly tense games. The quickest amongst you, your local snap champion, will likely be the winner every time, but it’s so light there’s not much on the line.

We’re unsure if the characters are all that different or worthwhile, and we did have a problem with the cards being a bit stickier than we’d like – a problem in a game which involves fast-flipping. If you can get over this, then it’s a solid
pub distraction.