Sidereal Confluence: Trading and Negotiation in the Elysian Quadrant review Sidereal Confluence: Trading and Negotiation in the Elysian Quadrant

Its title may sound like some sort of embarrassing medical condition, but Sidereal Confluence is actually a game of deep-space diplomacy where starfaring species vie to become the dominant faction in a cut-throat cosmos. While that’s hardly a novel concept, the game combines free-wheeling negotiation with complex economic strategy in some intriguing ways.

It rejects the militaristic flavour of many sci-fi games in favour of interplanetary politics. While it’s undeniably competitive, it encourages co-operation between players. You’ll use resources represented by different coloured tokens to research technologies, gaining new abilities and victory points in the process. But each new discovery requires a different combination of resources to unlock, and you won’t be able to acquire them without help.

During each round you’ll trade resources with your opponents – it’s here that things get interesting, because just about everything is up for grabs. You’ll exchange goods, planetary colonies and fleets of spaceships, and striking deals that see you come out ahead while remaining palatable to your opponents is a subtle art. To complicate things further, you’ll also be able to make agreements that play out over multiple turns, or to forge complex trades between three or more players at a time.

The really interesting bit, though? All of this negotiation happens simultaneously. Rather than taking turns to propose trades, players all pile in at once, with goods, promises and recriminations passing back and forth across the table like a kind of mathsy mosh pit. It’s hard to stay on top of it all and, if you’re not careful, you can find yourself out of your depth and at the mercy of your rivals. A bit like the Brexit negotiations, but in space.

Each of the game’s factions comes with a unique set of abilities that lend themselves to different tactical approaches. The Faderan are cosmic venture capitalists, handing resources to other factions and cashing in when they use them to develop new technologies. The Unity coalition generates valuable multi-purpose tokens that command a hefty price from other players. The insectoid Kt’Zr’Kt’Rtl (pronounced exactly as it’s spelled) are anarchic hackers, shaping technologies to their needs.

Each species comes with a player sheet outlining their strengths and offering some advice on how best to play with them. They also come with a difficulty rating, and some are far more complicated than others to get to grips with; this means newer players can pilot one of the simpler races to ease themselves into the game. But it also introduces imbalance, and how much can you really savour a victory if your opponents are playing a much harder faction than you?

There’s also the rulebook, which throws around in-game terms before explaining what they actually mean, and the game’s complex graphic design, which means that you probably won’t understand how everything works until you’ve actually played a few rounds.

That could definitely be frustrating, especially at a time when so many publishers are working to make the process of learning games as pain-free as possible. But if you’re looking for a mix of frantic player interaction and cold, cruel logic, then Sidereal Confluence has a lot to get your teeth – or hideous alien mandibles – into.

Sidereal Confluence will delight some players and repel others. Its emphasis on deal-making makes for some heated negotiations, and its cube-pushing economics requires some serious analytical skills. But it comes with a convoluted setup and a punishing learning curve, and you should ask yourself whether you’re likely to enjoy it enough to justify the hard work it entails. 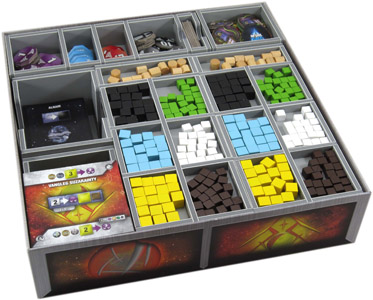