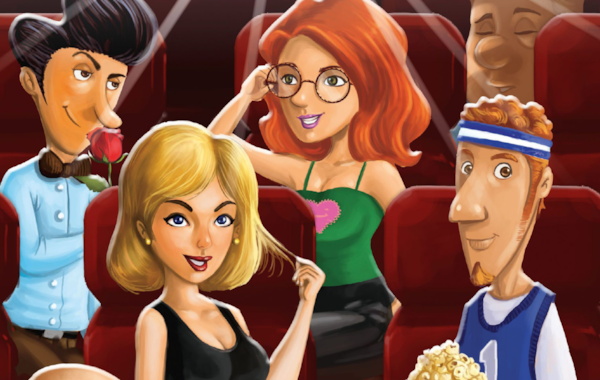 Four rows from the back, middle of the row. Everyone has a favourite place to sit in the cinema; Showtime has you trying to please as many picky cinephiles as possible by placing them in the sticky seats of their local multiplex.

The theme’s a winner, and helps lift up gameplay that’s otherwise as light as a piece of popcorn. The jigsaw-like board slots together the inside rows of a screen (more rows for more players) with the outside of a cinema, a movie poster displaying the scoring genre of movie for that round and a red carpet tracking players’ points. It’s clever, and cleverly presented.

Then it falls apart. Placing cards to put your patrons in the right seats isn’t all that interesting or difficult, and rarely are there enough viable options to make it particularly strategic. An unclear use of symbols to signify special abilities – there are a few opportunities for take-that rearrangement of your opponents' audience members – and denote who scores what where makes placement and scoring more drawn-out and clumsy than it needs to be.

The gameplay is a bit basic and flat, but it’s serviceable. What condemns Showtime to a permanent place in the bargain bins is how it takes such a promising theme and ruins it.

Each character has a favoured movie genre and specific seating requirement needed to score points. It’s a good idea for a lighthearted game, but the delivery leaves a seriously sour taste in the mouth.

The characters and their requirements range from the dull and clichéd to the downright creepy and offensive. A small-waisted, large-chested blonde gives bonus points for being seated near male patrons, and loses points for being near other women. Meanwhile, a chiselled George Clooney-ish hunk whose shirt is almost as white as the entire roster of characters gains points for being surrounded by fawning women. A physically larger movie-goer stuffing their face with food shouldn’t be sat next to anyone because L-O-L everyone hates greedy fat people, right?

Rampant with such lazy stereotypes and tiresome attempts at humour, Showtime is the kind of unpleasant aisle neighbour you’d never want to find yourself sat next to for the 20 to 40 minutes of its runtime, let alone the length of a feature film.