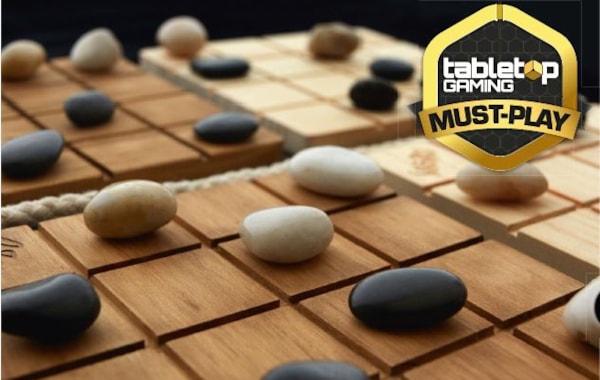 Four boards, one heck of an experience

Have you ever seen those stunning feats of intelligence
and strategy where chess grandmasters face off against dozens of opponents at the same time, and still manage to come out on top? Simply playing Shobu makes you feel like a genius, without the need to be a member of Mensa – the real genius is the game itself.

The game presents itself like a lost traditional design dating back centuries, but it’s a modern creation from co-designers Manolis Vranas and Jamie Sajdak. Its name, Japanese for ‘game’ or ‘match’, is a bit glib, but hints at its echoes of the likes of Go. The rustic components that make up its modest offering – four wooden boards, black and white stones, a short length of rope – are gorgeous; as simple on the surface as Shobu’s rules appear to be. At first, anyway.

You wouldn’t guess it, but Shobu is a game of mirrors. Its gridded boards reflect each other: two dark, two light, one of each tone on either side of the central rope. The black and white stones start along opposite sides, like the classic mirrored setup of chess or draughts. And every move is actually two, identical except for one important difference. Each turn, a player moves one stone on one of the boards on their side of the rope up to two spaces in any direction, like a stubborn chess queen. This is their ‘passive’ move. Then, they repeat the move exactly – same direction, same distance – with any of the stones on either of the boards of the opposite tone (dark rather than light, or vice versa), but this time the stubborn queen can shunt a stone of the opposite colour from their path as they go: the ‘aggressive’ move. It’s a beautifully clever idea, and it’s delivered with breathtaking confidence and clarity.

The aim is as basic as rocks, rope and wood. Remove all of your opponent’s stones from just one board by pushing them off an edge and you win. But this simple challenge is multiplied across the four boards; going for broke on one board is a quick way to find yourself being thoroughly trounced. Instead, it becomes a game of managing your stones on every board: moving and evading passively, attacking aggressively, and keeping your opponent on their toes on all four fronts.

A few turns into your first game, as your brain rewires to scan and cross-reference possible moves across the grid of grids, you start to feel like those chess grandmasters effortlessly juggling multiple games at once. Yet Shobu’s diamond-cut rules mean that you won’t start to struggle under the pressure – the call-and-answer way of executing moves allows for the exciting moments of trapping an opponent’s piece against an edge and the challenge of ensuring you’re able to retreat your own piece when cornered.

Shobu absolutely deserves a place in the pantheon of modern abstract classics alongside the likes of Tak, Hive and Santorini. Its inspired gameplay twist elevates the simple competition at its centre to a deeply strategic but pure experience; the beautiful natural presentation completes the sense that you’re playing something that may very well become the timeless classic it aims to emulate.