We are the sheep that are counted. The sheep that aid restful sleep and keep nightmares at bay. Round and round we travel, jumping a single fence one after another. But can we pick the right moment to drift off without waking up and ruining the night?

Let me envelop you in a big fleecy blanket as we dive into the world of Sheepy Time. If you are offended by the overly cutesy, you may want to look away now. Here, everything is cute – the theme, the name, the artwork, the terminology and even the villainous nightmares. For me, the sweetness of this dreamy world grates a little, so is best viewed with your tongue firmly wedged in your cheek. The sheepy terminology takes a bit of getting used to. Here we use Winks instead of points, Zzzs instead of tokens and Dreams instead of actions. It’s all very thematic, but adds a little extra to the learning time.

Despite the fluffy setting there are some surprisingly interesting choices. You collect winks by moving your sheep around a ten-space rondel and jumping over the fence. After each fence-jump you choose whether to keep moving or retire from the round. In addition, the nightmare, whose actions can force you to wake up and leave the round, is progressing slowly round the track. So the decision to ‘call it a night’ or to push on is critical. It feels like you’re playing chicken with the nightmare.

At the end of every round each player chooses a dream to add to a rondel space. In future rounds, landing on this space will enable you to take a special action - such as gaining winks or moving forwards – as long as you have Zzzz tokens on the dream. As you get infinite Zzzzs on many of the dreams you place, the dream you select and where you put it can significantly improve your chances. Some feel overpowered: for example, placing the ‘Move back one space’ dream just after the fence can enable the player to hop over the fence on multiple consecutive turns.

Each player chooses one of two cards in hand to play on their turn and this choice feels pretty limited. Most cards allow movements of 1 to 4 spaces and you frequently get stuck with two of the same cards in hand. While you usually want to move as far as possible, the position of the nightmare and its potential movement may limit you or make certain moves high risk. As you might expect in a push-your-luck game, there’s a load of randomness in the card draw and this can have players struggling to maintain any sort of control. Nightmare cards may cluster in the deck and be revealed in a damaging run that considerably changes the landscape. When the nightmare lands on you, your sheep becomes scared and lies down. Being scared a second time when lying down will force you to wake up, so there’s not much wiggle room.

The scoring mechanism is very pleasing. A counter tracks the winks you earn on this round and your ultimate aim is to reach or pass your pillow, which is how you win the game. The pillow starts at the other end of the score-track but gets progressively closer. The more winks you earn, the closer your pillow becomes, but your winks reset to zero after each round. The possibility of passing your pillow encourages you to push a bit further… to do just one more circle, and of course the further you push yourself... the harder you fall. Mwah ha ha!

Your limited ability to strategise forces tactical play, but the three different nightmares provide good variation between games so there’s plenty of fun to be hand. Just hold your nerve and don’t get fleeced.

TRY THIS IF YOU LIKED:  Shear Panic

The mechanics are totally different but if you’re big on cute sheep you can’t go wrong here. 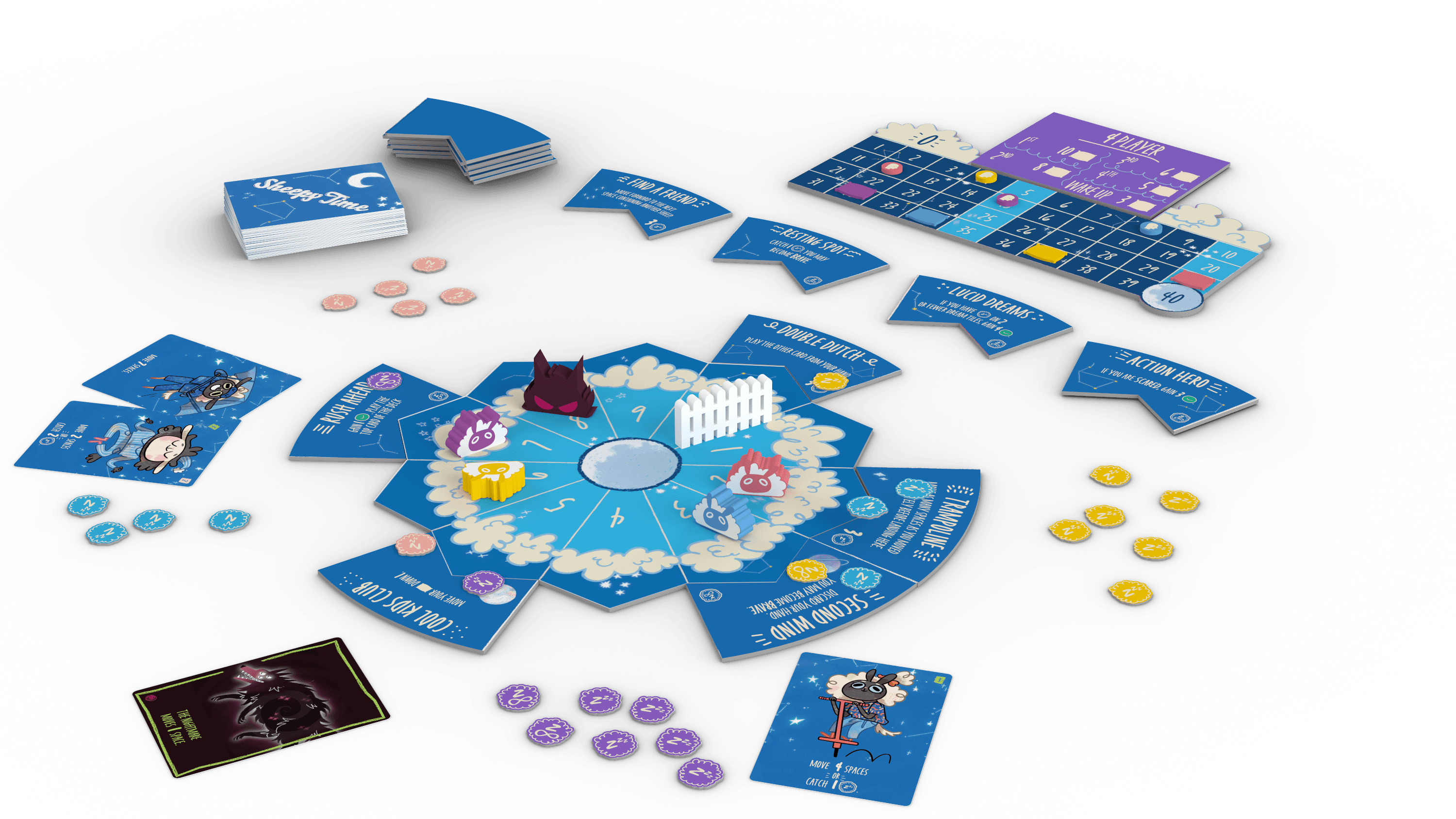 This review contains inaccuracies regarding the rules: "Some feel overpowered: for example, placing the ‘Move back one space’ dream just after the fence can enable the player to hop over the fence on multiple consecutive turns. " This type of move is not allowed according to the rulebook, which states: "Crossing the Fence can ONLY be done in a clockwise direction. Players may not move backwards over the fence under any circumstances."