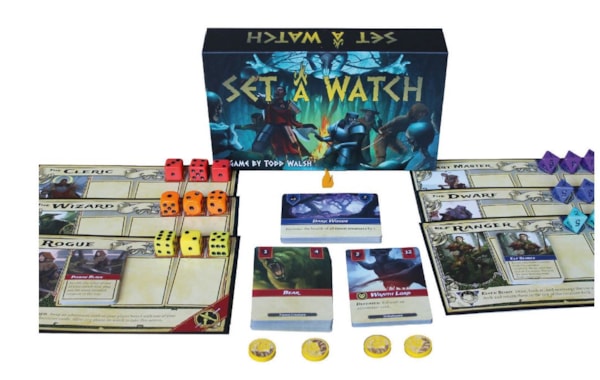 Anyone who’s played Dungeons & Dragons will be familiar with the scenario: after a long day’s questing, your battered party settles down for a long campsite rest. Or at least, that’s the plan, until the DM decides to disturb your HP-recovering 40 winks with an onslaught of restruining monsters.

Todd Walsh’s co-operative battle game takes this scenario and amps it to the max. Your team of four characters (cleric, rogue, ranger, beast master and so on) have to travel the land to nine different spawning points where much monster-slaying must occur. Rather than one of your team taking guard duty while the others sleep, in Set a Watch one of the party rests in camp whose fire needs to be judiciously maintained while the other three stay alert, working together to slay the oncoming monsters.

Mechanically, it’s all based on dice assignment. Each character rolls three dice (either six-sided or eight-sided, depending on their class) after the new location is revealed at the start of the round. Based on this, the group must decide who rests in camp, placing their dice to different effect on the rather neat little camp board, which is the box lid folded out. They could place any number to chop firewood and increase the campfire’s strength, thereby allowing for more monsters to be revealed as they line up outside the camp. Or they could place a six to heal someone (by refreshing one of their exhausted action cards). Or they could place a double or triple on the runes, to allow for extra bonus actions, like permitting the other players to re-roll, or to permanently remove a creature card from the horde, which is a pile of nasties guaranteed to attack en masse during the epic ninth and final round.

Once all the camp actions are done, then it’s time for the watch phase, when the other three characters have to try and defeat all the monsters screeching their way. Dice can be placed directly to score damage or assigned to action cards (each character has three active, randomly chosen from a deck of five during setup) to pull off special moves. This is a pleasingly puzzley process, as the group works together to figure out how best to make the most of all their different rolls and, indeed, roles. You really do need to maximise your efficiency during each and every turn this is not a forgiving game, even on its easy setting.

Summon cards will teleport in powerful unhallowed monsters who can really screw you up, while any undefeated creatures at a round’s end will force the party to exhaust a number of cards as damage, before joining the horde. If a player has three exhausted cards at the start of a watch, they can’t fight. If everyone’s cards are exhausted at the same time, you lose the game. Furthermore, if the campfire ever goes out, someone has to exhaust a card to rekindle it.

At heart, this is a tower-defence game, so will appeal to fans of that genre, though it can start to feel a bit sloggy towards the end, as the beasties just keep on coming and your party members struggle to avoid exhaustion. The fact that one player has to sit out the main combat action each round is also problematic, baking in a fair chunk of downtime for a quarter of the table if you’re playing with four. That’s not so much a problem at lower player counts, however, as there are always four characters no matter how many people are playing. If you play solo, you control all four; two players take two each; and with three players – the clunkiest player count – a ‘flex adventurer’ is chosen each round that the in-camp player controls during the watch phase.

As tough as it is, and as relentless as it gets, Set a Watch plays smoothly and demands your full tactical attention in an absorbing way. Never was getting a good night’s sleep such hard work.