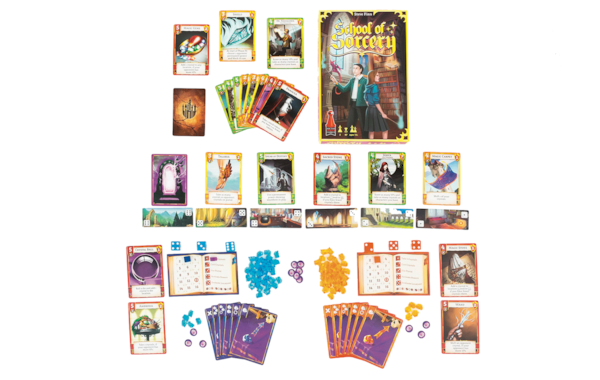 Looking at School of Sorcery’s box art, it is easy to picture yourself in the magic library of Hogwarts School of Witchcraft and Wizardry, as the two wizards ready their wands to conjure some mysterious, but powerful spell. Yet, the game has nothing to do with the Harry Potter franchise, and, despite naming components after magical crystals and teleporting portals, it has very few links to its magical theme at all.

Yet what it lacks in theme, it makes up with gameplay. This is a two player card drafting game, where players use dice and push-your-luck elements to gain the cards they want. Throughout the game, players assign crystals to claim cards (each with its own power and victory point value) by rolling dice – or casting a spell, as the game refers to it. The die outcome is not final and some light manipulation can alter the roll result to make it more of a decision than purely left up to a chance. The supply of crystals is limited per round, so players need to strike a balance between spreading themselves too thin and putting all of their resources on one card. And, of course, getting the right card powers that fit your overall strategy can be immensely powerful.

Every ingredient of the game – card locations, dice, crystals, powers – mix together in a magical brew of strategy and ease of play. It is rare to find a two player game, that has a relatively short play time, but also provides depth and challenge for a tight competition between two players, making School of Sorcery a rare gem, indeed.