Romance of The Perilous Land 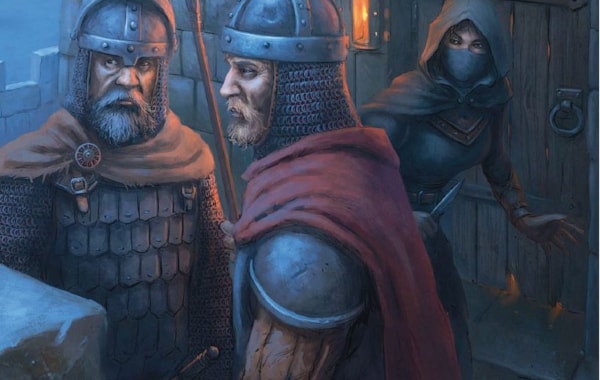 The Best of Quests

Between the knights, mages and monsters there’s very little in Romance of the Perilous Land that hasn’t already been tackled by countless other fantasy RPGs, but its sheer commitment to British folklore manages to create something both incredibly charming and thoroughly playable.

This is rather impressive, as the elevator pitch for the game an Arthurian spin on a 20-year-old Dungeons & Dragons ruleset doesn’t sound all that appealing. It’s only when you crack open the rulebook and plough through the rules that you realise there’s a lot more creativity on display than first meets the eye.

Let’s start with the setting itself. The titular Perilous Land is very much a stand in for the British Isles and while its stories are all formed around a core of King Arthur, Merlin and the knightly heroism that surrounds them, this is far from the only myth that’s been mined to make the world. Robin Hood and his Merry Men are a major in-game faction, for example, and listed among the bestiary are creatures as well-known as brownies and an obscure as the enormous dun cow.

There’s a genuine love of folklore running through every page of Romance of the Perilous Land and while not everyone will recognise the references and allusions, they nevertheless combine into a world that begs for exploration. There is an expectation that the GM is pretty comfortable with folklore-ey tropes to get things running smoothly, but it’s hard to imagine anybody picking up the game without at least being interested in these kinds of stories in the first place.

The other sizable chunk of creativity surfaces in the rules themselves, which despite having their core based on D&D – feel really rather distinct and surprisingly streamlined.

Part of this can probably be attributed to the fact that a lot of the more reality warping powers and spells found in more traditional fantasy RPGs don’t really fit in with Romance of the Perilous Land’s ethos. It’s a world where brave knights duel with dragons and cunning mages weave spells that can raise the dead, but not one where characters can expect to be casually teleporting their way across the battlefield or shaping the face of reality with the wave of a wand.

This all contributes to a stripped-down magic system that players should be able to grasp in a matter of minutes and a limited number of choices available when your heroes level up. For some the slim list of options will be a mark against the game, but there’s no denying that it makes things incredibly easy to pick up and play.

The game’s overall focus on simplicity and mid-weight magic bleeds over into the mechanics too. Different types of armour don’t make characters or monsters harder to hit, for example, but instead absorb damage over the course of a fight. This has the twin benefits of cutting down on mid-battle maths and also allowing heroes to fight their way through several life-threatening bouts per day without relying on endless sources of magical healing to explain away the wounds.

Of course, while this isn’t the highest of high fantasy, it isn’t exactly striving for realism either. Romance of the Perilous Land isn’t a game that cares too much about simulating ancient combat or revelling in the mud and blood of gritty battlefield horror, and if you go in expecting to look over a chart of which polearms excel at fighting cavalry, you’re going to be disappointed.

Instead of seeking to seize one extreme or another, it sits warmly in the middle, comfortably nestled down in a collection of fantasy tropes and old stories that most of us have internalised so completely we forget where we heard them in the first place. It’s not a game that’s likely to blow any minds or revolutionise the RPG scene, but it’s a fun, easy-to-handle way to while away a rainy afternoon with friends ideally with an open fire crackling away in the background.

If you have any interest in British folklore Romance of the Perilous Land is a treasure trove of interesting ideas and fresh takes on old stories. And if you don’t – even if you aren’t from the British Isles – it’s a fun mid-weight fantasy setting to play through; one packed with weird creatures and brave heroes.