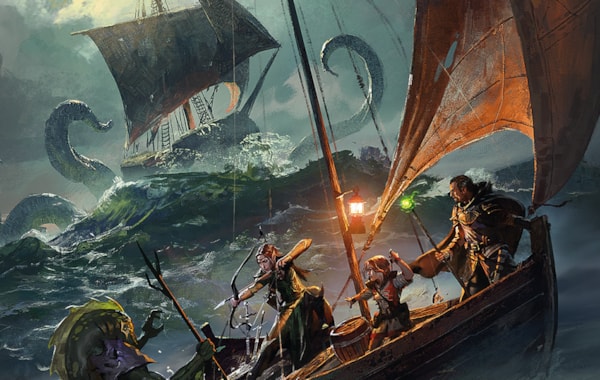 From ghost ships and smugglers to shark-people and kraken, this seaborne supplement for D&D’s fifth edition cheerfully plunders the long list of nautical clichés to craft a half-dozen quests that – though they may not have the world-shaking consequences or careful plotting of other campaigns – offer a pirate king’s hoard of swashbuckling excitement.

Rather than a central villain to overthrow or dire threat to battle, the scattered adventures of Ghosts of Saltmarsh are linked by their connection to the sea and the bustling port town of Saltmarsh. Each of them is chunky enough to last at least a couple of sessions of fun and provide their own little arcs of excitement and explanation, whether that involves raiding a sinking ship or negotiating with marsh-dwelling lizard folk.

Like 2017’s Tales from the Yawning Portal, each of the individual quests is a reimagined take on a classic adventure from D&D’s history. Where its predecessor kept each of its dungeons neatly separated from the others, Ghosts of Saltmarsh puts some effort into working them into a more-or-less functional campaign.

The slight hesitancy over this comes from the fact that you probably won’t be able to take the book as it is and run smoothly from the first page through to the final one. If you look at the recommended levels of the individual adventures you’ll spot a few gaps here and there – even if they all lined up, the nature of RPG parties means you’ll probably have to take diversions into unmarked waters anyway.

Fortunately, the designers have planned well for this; there are plenty of tables, maps and adventure hooks to lead you off the beaten path with comparatively little pain. Everywhere you look there are diversions and missions to occupy a party for a few days or interesting NPCs for them to befriend. The stage is set for political manoeuvring within the town of Saltmarsh, or you could choose to ignore this in favour of more battles against pirate princes.

Importantly, the need for these diversions only really begins to appear once the party have a few adventures under their belt. Hopefully by that point everybody should be more comfortable with the idea of going off-script; it’s very unlikely that newer GMs will be forced to pull together something entirely original. Once you feel comfortable in the setting and the rules, there’s some truly impressive scope for expanding things how you see fit.

Of course, there’s nothing forcing you to run Ghosts of Saltmarsh with a campaign in mind. Most of the adventures work wonderfully as one-offs – though a trio of the earlier examples feature direct links that can be awkward to work around – and are kept generic enough that it’s the work of a few minutes to slot them into any campaign or quest that happens to head seaward.

Even if you don’t use any of the adventures at all it may still be worth picking up the book for its lengthy rules on sea combat, sailing and battling underwater beasties. These really add to the windswept nautical feel of the tome; simply upgrading a ship until it sprouts countless ballistae and magical sails can become the focus of an entire campaign.

The toolbox nature of the rules and adventures provides something new to D&D; in many ways Ghosts of Saltmarsh works best when it’s used to provide a backbone to your own homebrewed campaign rather than as a completely self-contained unit. Most kitchen-table campaigns end up carving out their own stories anyway, and few pre-written adventures suit this quite as well as this one.

If you’re looking for something that will constantly force the characters into action the more focused D&D campaigns may suit you better, but if you’re comfortable with letting the players stumble their way into dramatic finales this latest book will set you on a course for many months of smooth sailing.

If your group has any interest in seaborne adventures this is an easy buy, whether you run it as a campaign on pinch adventures or ideas at your leisure.